Dr. Payne began by emphasizing the importance of treating men with mHSPC: while treatment with androgen deprivation therapy (ADT) provides initial responses, progression is common and a large proportion of prostate cancer-related deaths occur among men initially diagnosed with metastatic disease (40%) despite this comprising 13% of men diagnosed with prostate cancer. 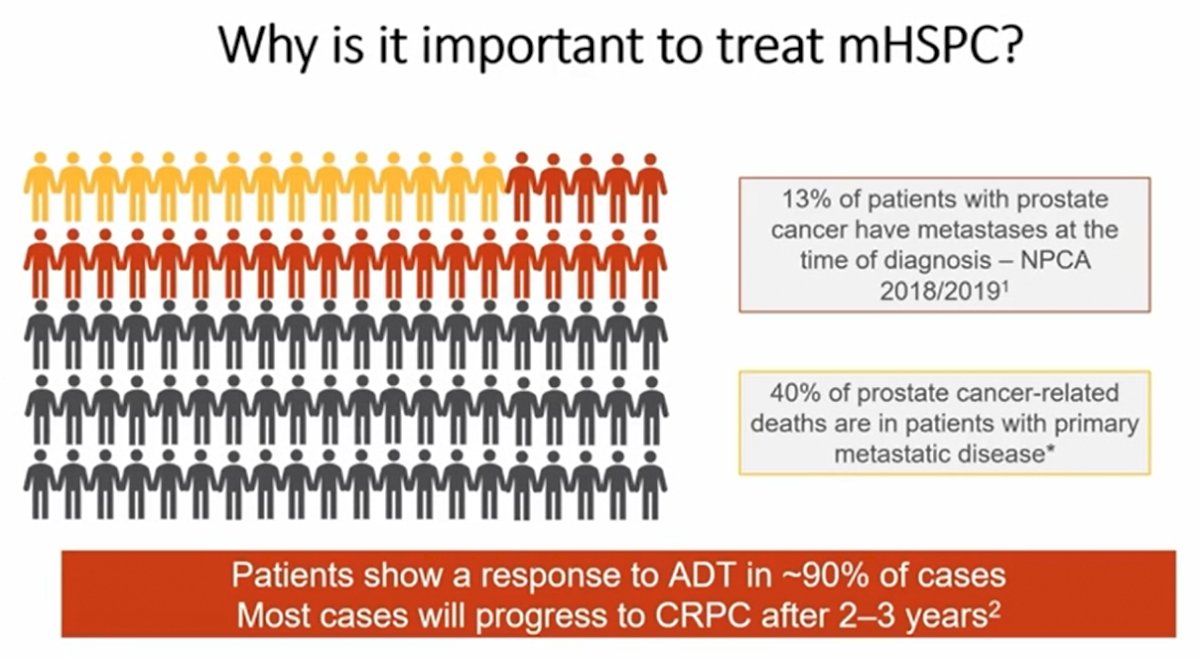 She then highlighted the potential rationale for whether we can improve treatment outcomes with treatment intensification highlighting that early intensification allows upfront treatment of de novo testosterone independent clones early and that patients may be too frail for chemotherapy at the time of progression. In contrast, for those with prolonged responses to ADT, initial intensification may be overtreatment.

Moving then to data on treatment intensification, she first highlighted data from CHAARTED and STAMPEDE which demonstrated significant improvements in overall survival for patients with mHSPC who received docetaxel in addition to ADT, compared to ADT alone. She emphasized that the CHAARTED study further contributed a new definition of high volume metastatic prostate cancer. In the CHAARTED cohort, a statistically significant benefit of docetaxel was only seen in those with high-volume disease. However, Dr. Payne emphasized that these subgroups weren’t powered to be definitive. In contrast, subgroup analyses from STAMPEDE have demonstrated improvements in overall survival for patients with both low- and high-burden metastatic prostate cancer for patients treated with docetaxel.

Utilizing real world data, she emphasized that there are significant toxicities to docetaxel including rates of treatment-related death of approximately 2%, febrile neutropenia of more than 15%, and grade 3-4 toxicity or hospitalization of 34%. These rates are somewhat higher than was observed in clinical trial populations.

She then moved to a discussion of the rationale for the addition of androgen receptor targeting agents (ARTA) to ADT in mHSPC, given that resistance to ADT may happen early and that these agents improve OS in mCRPC. Here, two trials (STAMPEDE and LATITUDE), demonstrated comparable improvements in overall survival for the addition of abiraterone and corticosteroid to ADT. Dr. Payne emphasized however that the patient populations differed somewhat with LATITUDE particularly enriched with patients having high-risk features, including 2 or more of Gleason score 8 or greater, more than 3 lesions on bone scan, and measurable visceral disease. Further, patients had to have de novo metastatic disease. She further noted that tolerability of abiraterone showed no new signals in this disease indication compared to mCRPC.

She then highlighted long-term follow-up of the abiraterone + standard of care vs standard of care alone comparison from STAMPEDE which was presented at ESMO 2020. This shows the prolonged benefit of this treatment approach out to 8 years, with a median survival benefit of almost 3 years (6.6 vs 3.8 years among patients with M1 disease). Further, this report demonstrated no difference in benefit between patients with low- and high-burden of disease.

Dr. Payne then moved to discuss the role of enzalutamide in this disease space. ARCHES allowed prior, but not concomitant, docetaxel and demonstrated improved radiographic progression free survival and overall survival with preserved quality of life and manageable toxicity. She noted fatigue was somewhat less problematic in this indication compared to mCRPC. TITAN assessed apalutamide in the same indication with similar design to ARCHES with prior docetaxel allowed. Again, over a median follow-up of 44 months, apalutamide significantly improved overall survival. She noted in particular that apalutamide was associated with a rash relatively commonly and hypothyroidism relatively uncommonly, though frequently enough that monitoring of thyroid function is indicated.

Summarizing these data, she highlighted that the current ESMO and EAU guidelines support the level 1 evidence for using ADT plus one of four additional options (docetaxel, abiraterone, enzalutamide, or apalutamide). She suggested that nearly no patients should be receiving ADT alone baring “extremely special circumstances”, however, real world data suggest a dramatic underutilization of these agents with the majority of newly diagnosed men receiving ADT alone.

In the UK, prior to the COVID-19 pandemic, only docetaxel was indicated for mHSPC and the utilization was poor. However, as a result of the pandemic, the NICE guidelines recommended use of subcutaneous or oral agents which opened the option of enzalutamide in this disease space.

Dr. Payne then discussed the ENZAMET trial which allowed concurrent docetaxel and randomized allocation to enzalutamide or first-generation anti-androgen. The use of enzalutamide was demonstrated to significantly improve overall survival. However, this was driven by those patients who did not receive docetaxel: for those who did receive docetaxel, outcomes were similar whether they received enzalutamide or a first-generation anti-androgen. There was an increase in toxicity associated with this “triple” therapy.

In the meantime, results from PEACE-1 have been presented examining the role of abiraterone in a population in which the standard of care has evolved over time and included docetaxel eventually being mandated. Among those patients who received docetaxel as standard of care, the addition of abiraterone improved radiographic progression-free survival by a median of 2.5 years. Presented recently, there was a demonstration that this approach improved overall survival as well, with a relative decrease of 25% in the risk of death.

Moving forward, Dr. Payne suggested that PEACE-1 is potentially practicing changing though longer-term follow-up from ENZAMET and ARASENS data is needed, particularly to guide care for patients with low-volume disease. She further suggested that her standard of care is ADT + ARTA and that none of these studies assess whether adding docetaxel to this combination is beneficial (rather, only that the converse is). She emphasized that quality of life studies are critical and that numerous other combinations are actively being examined.