(UroToday.com) The ANZUP 2021 virtual annual scientific meeting included a presentation by Dr. Sima Porten discussing the use of molecular subtypes in muscle invasive bladder cancer (MIBC) to improve patient selection for treatment. Today’s personalized medicine can be looked at through a variety of lenses:

Dr. Porten notes that the AUA guidelines suggest treatment options for patients that we should use in the context of comorbidities, tumor characteristics, and quality of life implications. These include: radical cystectomy + pelvic lymphadenectomy, neoadjuvant chemotherapy (cisplatin based), adjuvant chemotherapy and immunotherapy, and bladder preservation with trimodal therapy (maximal TURBT, chemotherapy plus radiation). To date, the depth and extent of tumor invasion determines the stage and treatment, irrespective of the molecular alterations or accuracy of overall clinical stage.

Dr. Porten then continued the discussion by outlining three different patients in her practice: 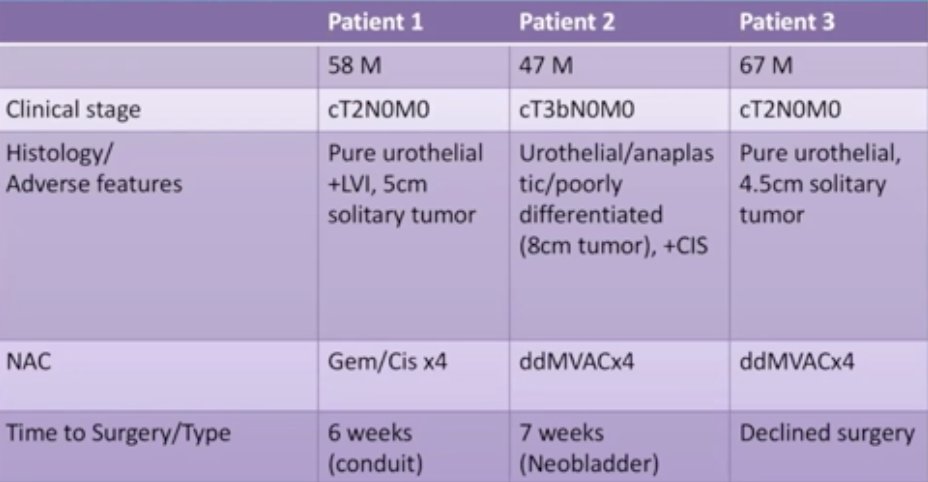 Patient #1 unfortunately had a pure urothelial pT3aN2(38 nodes)M0 tumor after cystectomy and had bone metastasis within six months. Patient #2 had an exceptional response to chemotherapy, pT0N0(25 nodes)M0 and is alive and well at most recent follow-up. Patient #3 declined surgery after significant side-effects from neoadjuvant chemotherapy and despite no radical cystectomy after neoadjuvant chemotherapy is alive and well with no evidence of metastatic disease. Despite similar tumors at presentation, these patients all had different courses and outcomes. To try and better understand why this may be the case, Dr. Porten notes that perhaps this has something to do with the underlying tumor biology, which may be assessable with molecular subtype signatures. Early work from the MD Anderson Cancer Center, of which Dr. Porten contributed to during her fellowship, suggested that patterns of RNA expression defined basal and luminal marker subtypes. The basal subtype tumors have an overexpression of stromal keratin and cell adhesion markers. The luminal subtype, both the p53-like and the pure luminal group are characterized by an overexpression of surface keratins. Together, the pathophysiology of luminal and basal MIBC is summarized in the following figure: 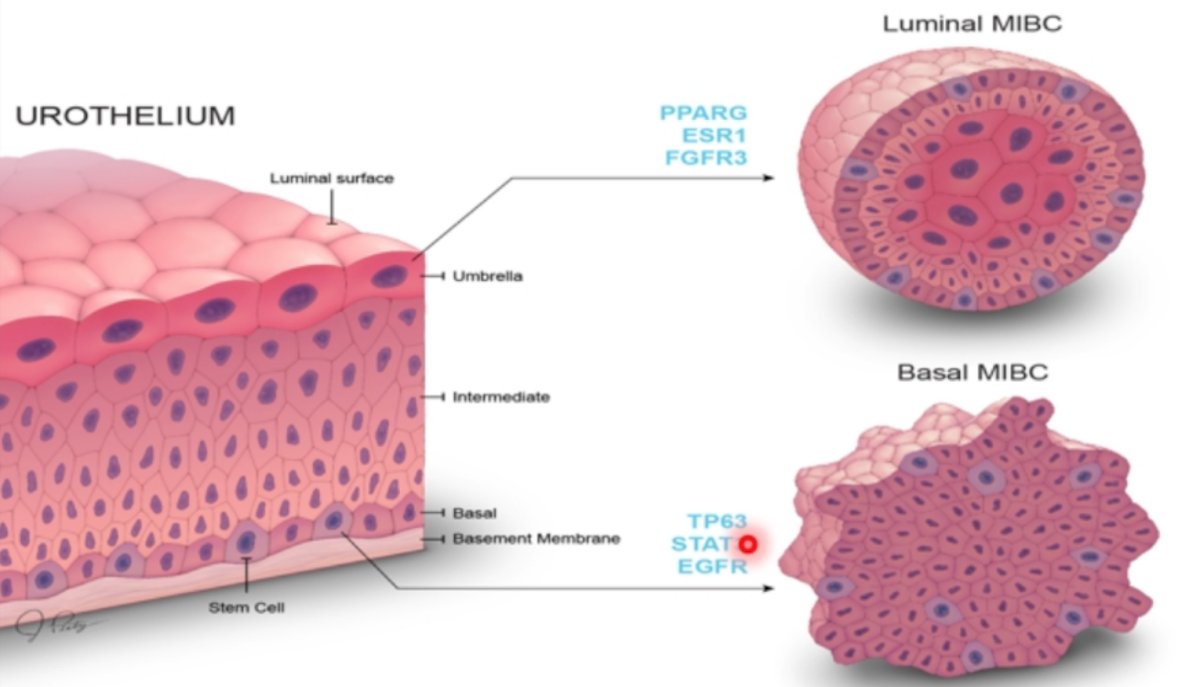 Following the work from MD Anderson was the seminal publication in Cell that transformed biomarkers in the TCGA dataset [1]. Among 412 MIBC patients, the luminal and basal subtypes were further substratified to luminal-papillary, luminal-infiltrated, luminal, basal-squamous, and neuronal: 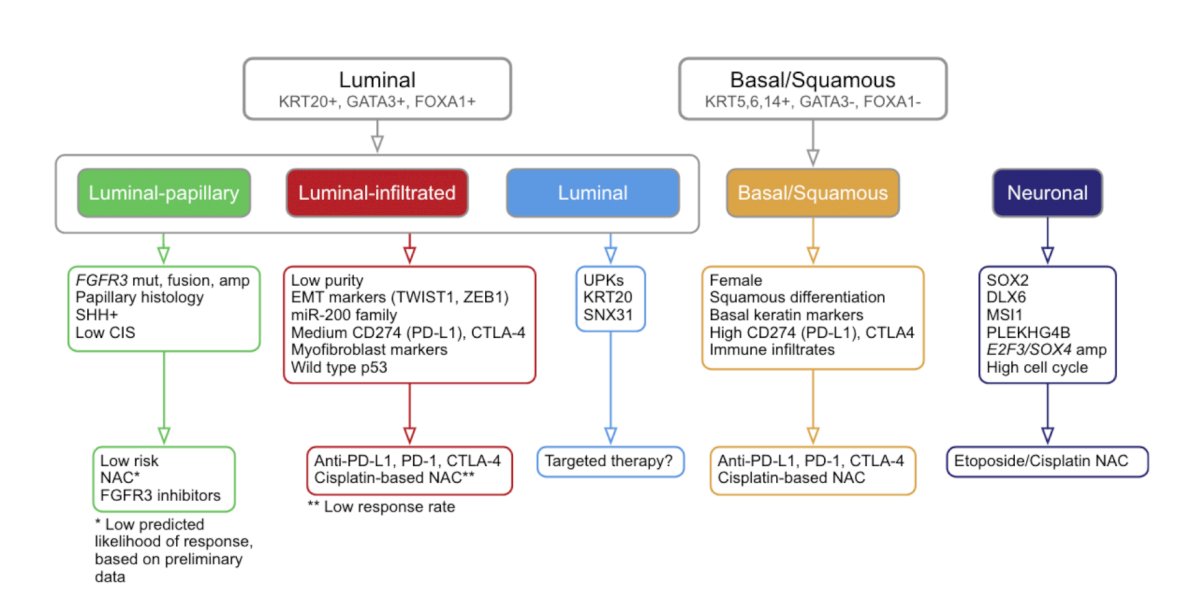 Because of the variability of the classification systems identifying different types of patients, the push was for a consensus molecular classification of MIBC, which was subsequently published in European Urology in 2020 [2]. The following figure demonstrates the relationship between subtyping results from six input classification schemes summarized in the consensus classification:

With regards to prognostication, the early work from the MD Anderson group showed that p-53-like patients had the best survival followed by luminal and the worst survival among basal-like tumors. These survival patterns were also recapitulated in the TCGA dataset with the more stratified subtyping: 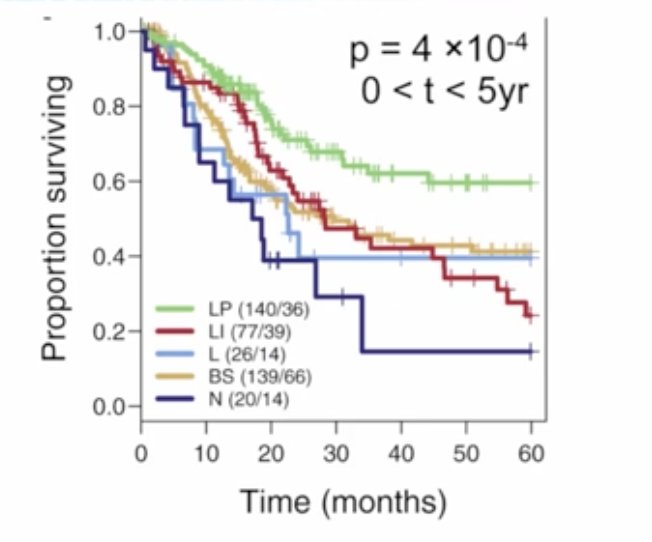 Additionally, early work from MD Anderson also showed that effective neoadjuvant chemotherapy may also be able to reverse subtype related outcomes, specifically demonstrating that basal-like tumors had improved overall survival after neoadjuvant chemotherapy. Based on all of the above information, the next step was commercialization into a usable tool, which is now known as the Decipher Bladder Genomic Classifier. This classifier provides results of luminal versus basal based on TURBT tissue from patients with MIBC.

In the neoadjuvant disease space, the PURE-01 trial tested pembrolizumab prior to cystectomy, demonstrating that 42% of patients had a pathological complete response, which was enriched in patients that were CPS positive versus those that were not CPS positive [4]. When these patients were assessed on the Decipher-based platform, the basal claudin low patients happen to have similar outcomes with or without neoadjuvant chemotherapy and excellent results with the neoadjuvant immune checkpoint inhibitor therapy.

Dr. Porten then transitioned to discussing DNA alterations and RNA subtypes. In early studies lead by Dr. Plimack [5], alterations in any DNA repair genes (ATM, RB1 and FANCC) predict pathologic response and better overall survival. Furthermore, the ATM/RB1/FANCC signature did not correlate with subset assignment, but were predictive of neoadjuvant chemotherapy response and were prognostic for survival.

Dr. Porten notes that there is one prospective biomarker trial in MIBC, the S1314 COXEN trial. This study included patients randomized to either gemcitabine + cisplatin or dose-dense MVAC followed radical cystectomy + pelvic lymph node dissection. A COXEN score was assigned based on the regimen received, and the primary objective was to characterize the relationship of dose-dense MVAC and gemcitabine + cisplatin specific COXEN scores to pT0 rate. There were 167 patients enrolled with cT2-T4aN0M0 disease. Unfortunately, the trial did not meet its clinical endpoint, as the negative predictive value of COXEN was 50%, which was below imaging and an exam under anesthesia. However, the silver lining of this study was that the pathologic downstaging rate was 50-60%. Dr. Porten highlighted two trials currently accruing patients utilizing DNA alternations, including the A031701 trial using molecular profiling to identify MIBC patients who can be managed with definitive chemotherapy alone: 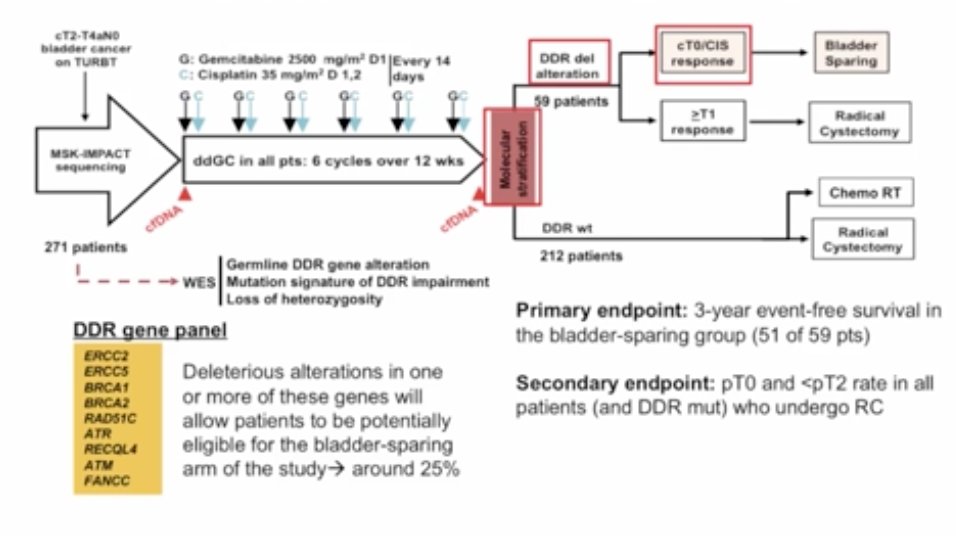 The second trial she highlighted is the RETAIN trial, with the schema noted in the following figure: 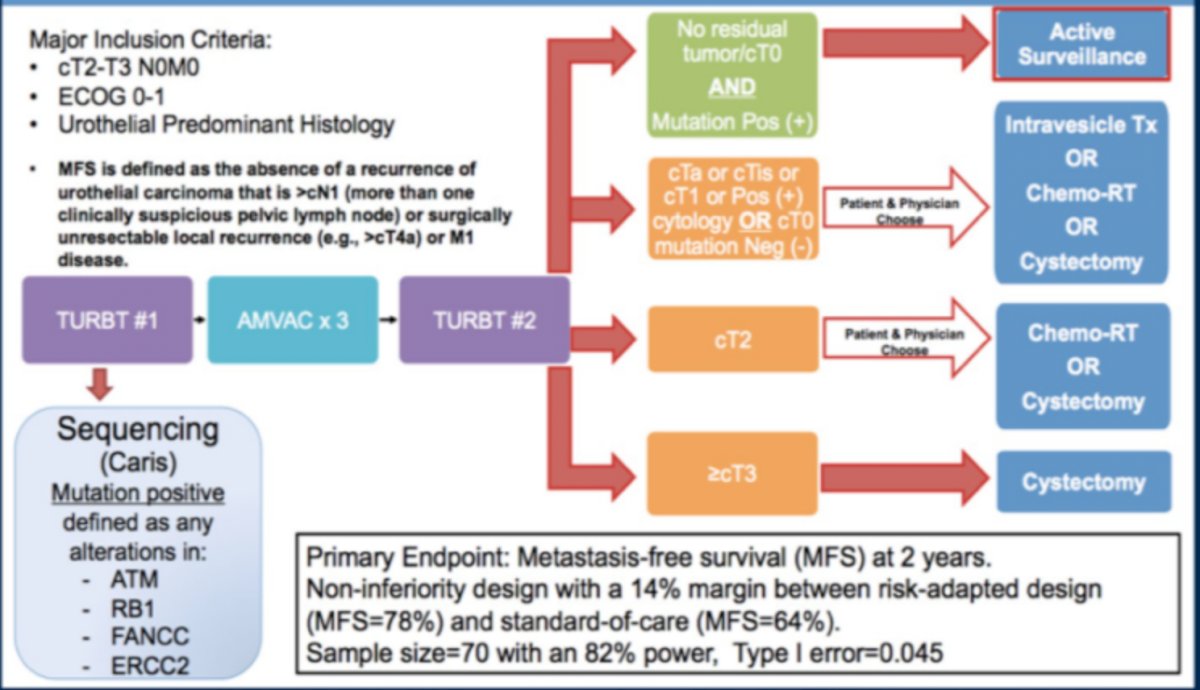 Dr. Porten concluded her presentation of moving toward better patient selection for treatment of patients with MIBC with the following concluding statements: