(UroToday.com) As one of the final sessions of the second day of the 2021 ANZUP Annual Scientific Meeting, the Crossfire Debate included a focus on the relative importance of waiting for overall survival data before acting upon the results of clinical trials.

Following Dr. Pryor’s presentation, Dr. Pook argued that we may wait for overall survival. However, he highlighted three questions that he considered relevant:
#1. Is there a clear line of site [from surrogates] to a worthwhile OS benefit?
#2. Is there at least improved quality of life?
#3. Is the treatment cost-effective?

Addressing the first of these questions, he suggested that the relation between surrogate endpoints and overall survival is often blurry. Highlighting the example of KEYNOTE-564, the use of adjuvant pembrolizumab in renal cell carcinoma demonstrated a 9% improvement in 2-year disease free survival. However, we need to consider the proportion of those patients with disease recurrence who may be salvageable with local therapies. In KEYNOTE-564, a larger proportion of patients who have DFS events in the placebo arm had local relapse and could receive local therapy. Further, he emphasized considering the proportion of patients who may have particularly elevated risk. In the context of KEYNOTE-564, this corresponds to those with M1 disease rendered with no evidence of disease surgically (12%) of the cohort in whom the benefit of adjuvant therapy was dramatically larger (HR 0.29) than the overall cohort.

He further emphasized that, in the context of this trial, the DFS curves separate as of the first scan. Those patients who have early failure events may simply be better served, he suggested, receiving approved combination approaches at the time of relapse.

Dr. Pook then considered the question of whether trial results are consistent. Highlighting trials in advanced urothelial carcinoma, he emphasized that positive results for surrogate endpoints such as disease-free survival have failed to translate to consistent overall survival benefits.

Further, there is no consistency between the DFS outcomes and overall survival outcomes.

He then highlighted the downside of surrogate endpoints. Highlighting data from Gyawali and colleagues, more than 80% of drugs approved on the basis of accelerated approval by the FDA never demonstrated overall survival benefits, either because the studies were not conducted or because the trials were negative. He highlighted the example of bevacizumab in metastatic breast cancer which was approved on the basis of improved progression-free survival in 2007. Subsequent trials demonstrated no improvement in overall survival and a significant toxicity. Thus, four years later (in 2011), approval was revoked. However, Dr. Pook emphasized that it is often difficult to revoke approved treatment indications. He suggested that, in the example of bevacizumab for metastatic breast cancer, that approval based on progression-free survival benefit (rather than waiting for overall survival data) contributed to four years of harms.

Dr. Pook then emphasized potential harms. Again citing the KEYNOTE-564 data, he showed that (while often only a trend), health related quality of life declined for patients receiving pembrolizumab and adverse events were higher. Thus, given uncertainty of benefit and potential risk, it is difficult to fully consider the role of many treatments.

Considering for a minute the health system, rather than individual patient, perspective, he highlighted that oncology drugs are driving a large proportion of medication related costs in modern health care. 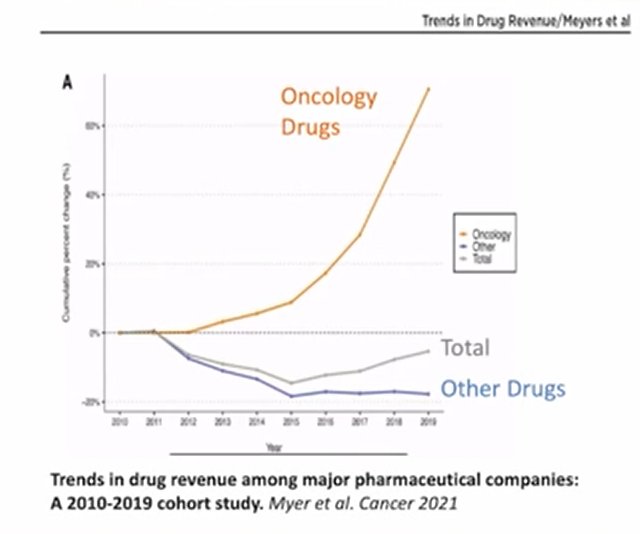