One of the most important advances in testis cancer research is the utilization of miRNA based on its prognostic and predictive value. The two most common miRNAs in testicular germ cell tumors include miR-371-373 and miR-302, which are present in seminoma and non-seminoma, and both adult and pediatric patients.

Several early studies in this field have shown that miRNAs are more sensitive and specific than existing tumor makers. miRNA is detectable in the serum whereby they are released into the bloodstream via exosomes and are resistant to degradation. Furthermore, they have a short half-life (T1/2 of 3-7 hours), compared to beta-HCG (36 hours) and AFP (5-7 days). First presented at the 2019 American Society of Clinical Oncology - Genitourinary Symposium (ASCO GU 2019) by Dr. Hamilton, as follows is a table describing the varied methods of assessing miRNA:

An important ongoing prospective study that will continue to clarify the role of miRNA in testis cancer is the SWOG S1823 trial “Prospective cohort study of miR-371a-3p for tumor surveillance in stage I testicular cancer”:

Additionally, the Children’s Oncology Group has the ongoing AGCT1531 study “Minimizing toxicity for low and standard risk pediatric, adolescent and young adult germ cell tumor patients” and ANZUP has the CLIMATE trial “Assessing the clinical utility of miR-371 as a marker of residual disease in clinical stage 1 testicular germ cell tumor, following orchiectomy”. Both of these trials are parallel studies to the SWOG S1823 study with an agreement to combine data for larger analysis. Dr. Hamilton notes that there is important retrospective data to date, but it will be exciting and important to see the outcomes of these prospective studies.

With regards to the role of primary retroperitoneal lymph node dissection (RPLND), Dr. Hamilton notes that for patients with stage IIA non-seminomatous germ-cell tumors (NSGCT) (either de novo or progression on surveillance), this is a viable option, particularly if the procedure can be performed robotically with the same oncological principles as the open approach. Additionally, Dr. Hamilton notes that the robotic approach offers the opportunity to perform an excellent nerve-spare and these patients are often discharged on postoperative day 1. Primary RPLND for seminoma is currently being evaluated in several clinical trials including the PRIMETEST and SEMS trials, with data hopefully being reported in the near future. The PRESTIGE study is an ongoing trial with the following trial schema: 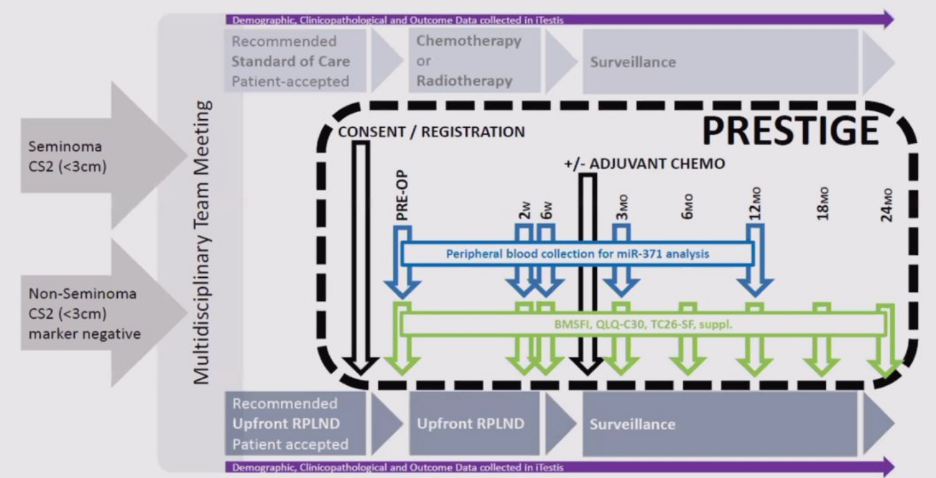