In this session, Dr. Shomik Sengupta led a presentation entitled “About an ANZUP Trial” highlighting his experience designing a trial and the role of input from ANZUP. (The Australian and New Zealand Urogenital and Prostate Cancer Trials Group (ANZUP)). He began highlighting the definition of clinical trials, emphasizing that these investigations depend on patients to volunteer to test new treatments, interventions, or tests to prevent, detect, treat, or manage the various diseases.

He emphasized that clinical trials are critical in advancing medical care, in particular through the assessment of new interventions aimed at improving outcomes. Further, randomized controlled trials may allow the overturning of “conventional wisdom”.

Dr. Sengupta then highlighted two “sources” of clinical trials, emphasizing differences in the generation of study ideas: industry-sponsored trials and investigator-initiated studies (which may be single center or multi-center). He highlighted funding-related advantages to industry-sponsored trials though there are concerns regarding these studies, including in particular publication bias with the suppression of negative studies that are not deemed favorable to the sponsoring company.

Many multi-center investigator-initiated trials may be undertaken in the context of cooperative groups, of which ANZUP is one of many worldwide. ANZUP was established in 2008 through the merger of two existing groups with the missing to conduct trials to improve the treatment of bladder, kidney, testicular, and prostate cancer. 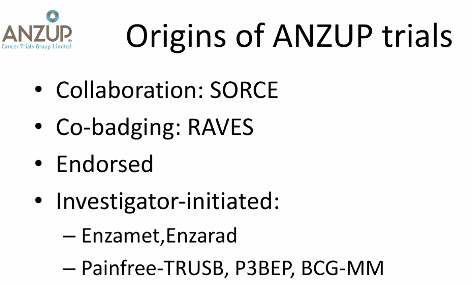 Dr. Sengupta then highlighted his personal experience designing a developing a trial within the context of ANZUP. He initially began with an idea to assess the role of bladder irrigation following transurethral resection. He highlighted the importance of concept development workshops to refine the study question, through the input of a multi-disciplinary team. Further, ANZUP and other cooperative groups can offer seed funding to support early pilot studies. In his particular experience, he described the ongoing struggle for funding to support the scaling up of research endeavors.

Dr. Sengupta then discussed particular issues in the design and conduct of surgical trials. Historically, these trials have been difficult to run and accrue and there have been many failed trials with the resulting surgical literature thus dominated by case series and observational comparisons. Notably, surgery, as an intervention, differs from medications or radiation in the importance of individual surgeon expertise and experience in delivering outcomes. Further, there are difficulties relating to randomization and blinding. Given issues with sham surgery, most of these trials are open-label and unblinded.

This session closed with questions from the audience with Dr. Sengupta highlighting the importance of deriving study questions for identified unmet clinical needs and the evolution of these prior to actual implementation, emphasizing that “the first idea is never the final one”.