Dr. Zhang started by presenting a case of a 54-year-old man with a past medical history of hypertension and hypercholesterolemia. He subsequently had an incidental finding of a small right renal mass: 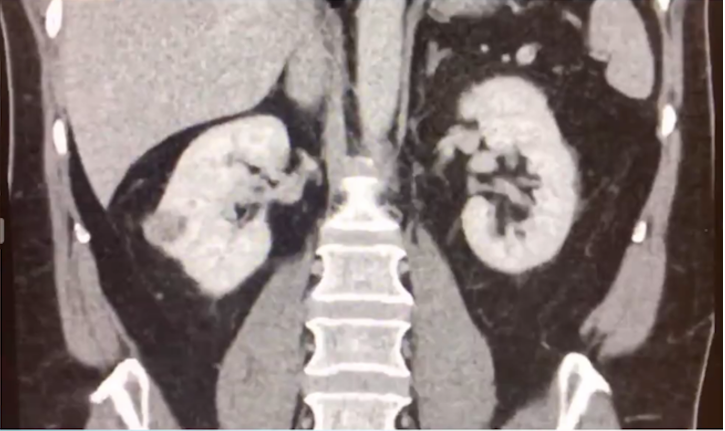 The following options were posed to the panel: (i) active surveillance, (ii) biopsy, (iii) radical nephrectomy, (iv) partial nephrectomy, or (v) stereotactic ablative therapy. Dr. Ahmadi notes that the decision to biopsy a small renal mass depends on whether it will influence management versus complicate the surgical excision. His algorithm for performing a renal mass biopsy is as follows:

This patient was unfortunately lost to follow-up and represented 15 months later with a 3-month history of back pain and occasional hematuria. Reimaging demonstrated a 12 x 9 cm right renal mass with a level 1 tumor thrombus and a 2 cm retrocaval node with no evidence of metastatic disease elsewhere. At this point, the following options were posed to the panel: (i) surgery, (ii) radiotherapy, (iii) systemic therapy with a TKI, or (iv) systemic therapy with an IO/IO combination. Given the locoregional disease, the panel’s recommendation in this situation was for aggressive surgical management. To change the clinical situation slightly, Dr. Zhang noted that if the patient had all of the aforementioned CT findings, but also had a 4 mm right upper lung and 5 mm right lower lung nodule, would this change management? Even considering data from the CARMENA trial suggesting that upfront sunitinib alone is non-inferior to cytoreductive nephrectomy followed by sunitinib,1 93% of the audience would still offer the patient a nephrectomy in the setting of these small lung lesions.

This patient was offered surgery but refused surgery stating that he needs to focus on his business ventures. Abby Fyfe then provided a discussion for engaging the non-compliant patient, specifically nursing strategies that she has employed in her career. These include educating the patient, understanding their motivation, assessing their level of support (both internal and external), keeping it simple for the patient, and not beating one’s self up when these tactics still do not work.

Eventually, this patient did undergo a radical nephrectomy with a retro rural node dissection with final pathology demonstrating a 10 cm clear cell renal cell carcinoma pT3N1R0. Nine months after his nephrectomy, he had a 2.1 cm recurrence in the right adrenal gland and growing asymptomatic lung nodules: 8 mmm in the right upper lung and 7 mm in the right lower lung. At this point the following treatment options were provided to the audience:

The majority (41%) of respondents noted that they would start systemic therapy in this patient. This patient ultimately underwent right adrenalectomy and in the meantime, he had progression in both size and number of his asymptomatic lung nodules (now up to 5 nodules). Given the disease progression, the patient was counseled on starting systemic therapy; based on several options available, the following is the result of the audience poll with regards to first-line systemic therapy: 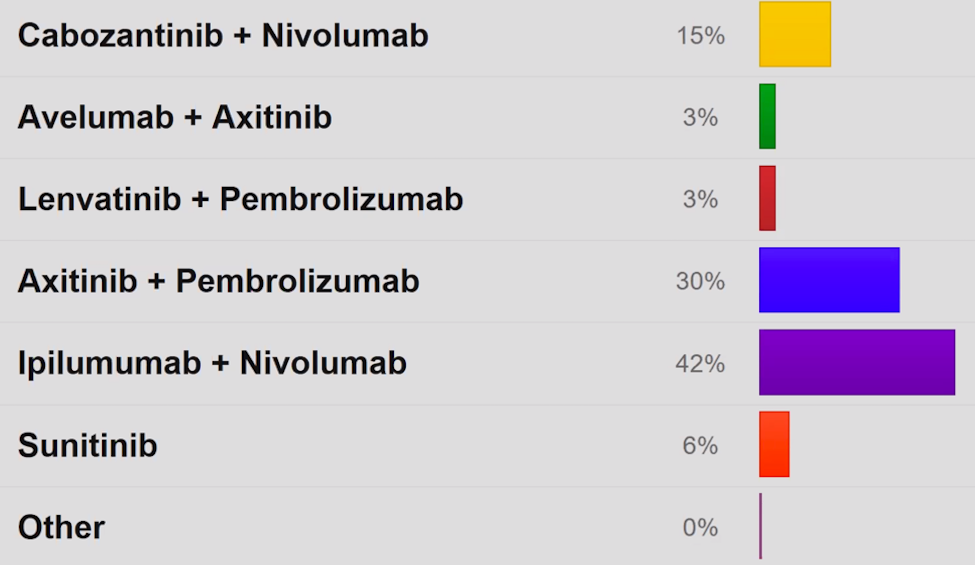 This patient subsequently went on the CheckMate 9ER study, receiving cabozantinib and nivolumab. After 8 weeks on treatment he presented with 10-12 episodes of diarrhea per day for six days and was extremely dehydrated. Dr. Gurney notes that it is important to differentiate diarrhea from a TKI versus IO: if you stop the cabozantinib (and it is TKI related) diarrhea will go away within 7-10 days, however, if you stop both the IO and TKI and the diarrhea is immune-related, diarrhea will not go away. Furthermore, Dr. Gurney notes that if there is terrible diarrhea (bloody) it is no doubt immune colitis and they should be started on steroids.

The patient ultimately underwent a flexible sigmoidoscopy and found to have immune-related colitis and the nivolumab was stopped; he was treated with a tapering dose of steroids with a resolution of this diarrhea. He subsequently progressed on first-line treatment and the following systemic therapy options were posed to the audience: (i) lenvatinib + everolimus, (ii) sunitinib, (iii) axitinib, (iv) ipilimumab, and (v) another TKI/IO combination. 44% of the audience would offer the patient lenvatinib + everolimus, and 26% would offer the patient axitinib. Dr. Gurney also stated that in these situations it is important to consider the patient for a clinical trial, including the CONTACT-03 trial (phase 3 testing atezolizumab + cabozantinib versus cabozantinib), or the phase 2 HIF alpha inhibitor MK-6482 trial.