(UroToday.com) Seyed Hossein Hosseini Sharifi, MD, and his University of California, Irvine team put on a display of scientific ingenuity during their presentation regarding a novel catheter developed to aid in ureteral relaxation. A challenge many urologists face is creating an access path through the ureter, infamous for how difficult it is to pass any surgical instrument through. The average human ureter size is around 3-4mm. About 46% of patients who undergo ureteroscopy experience ureteral injury; mild injuries make up 33% and severe make up 13% [1],[2]. It is vital to relax the ureter to create simplified access to stones within the ureteral tract or the kidney and be able to pass instruments from the urethra to the kidney with ease [3]. The current common practice is to relax the ureter by prescribing medications prior to surgery (typically several days to a week before) and/or using dilators in the operating room. Even if all these preliminary steps are taken, the ureter may still be unable to allow access which inevitably delays patient care.

Electromotive Drug Administration (EMDA) is a novel method of drug delivery. This technique relies on the use of an electrical current to influence the movement of drugs by interacting with the molecular charge of the surrounding tissue. In an unprecedented attempt, Dr. Sharifi devised a protocol to utilize EMDA to administer drugs directly into the ureter. His goal is to be able to instantaneously relax the ureter within a matter of minutes within the operating room, eliminating many of the hindrances faced due to the delicate nature of the ureter. A preparatory experiment was conducted using methylene blue to test whether this idea is safe and possible. Methylene blue shares chemical characteristics to potential drugs that would be administered through the EMDA and its color allows for a visual understanding of how much absorption occurs within the tissue. The experiment was conducted on two male pigs. For each experiment, there was a control ureter and an experimental ureter. For the experimental ureter, an innovative sheath was designed to administer 5ml/min of 10 mA of methylene blue into a pig ureter for a total of 20 minutes. The same design was incorporated into the control ureter with the exception of the electrical charge.

The results were astounding and showed that EMDA was a success in both pigs. The image below shows the difference between the two ureters after 20 minutes of methylene blue administration, with the top ureter being the one that underwent EMDA. The dark blue stains show that methylene blue was able to penetrate into the tissue.

Methylene blue penetration was a vital point of this study. The image below shows the absorption of methylene blue in the experimental ureter. EMDA allowed for absorption into the urothelium, lamina propria, muscularis propria, and periureteral tissue. 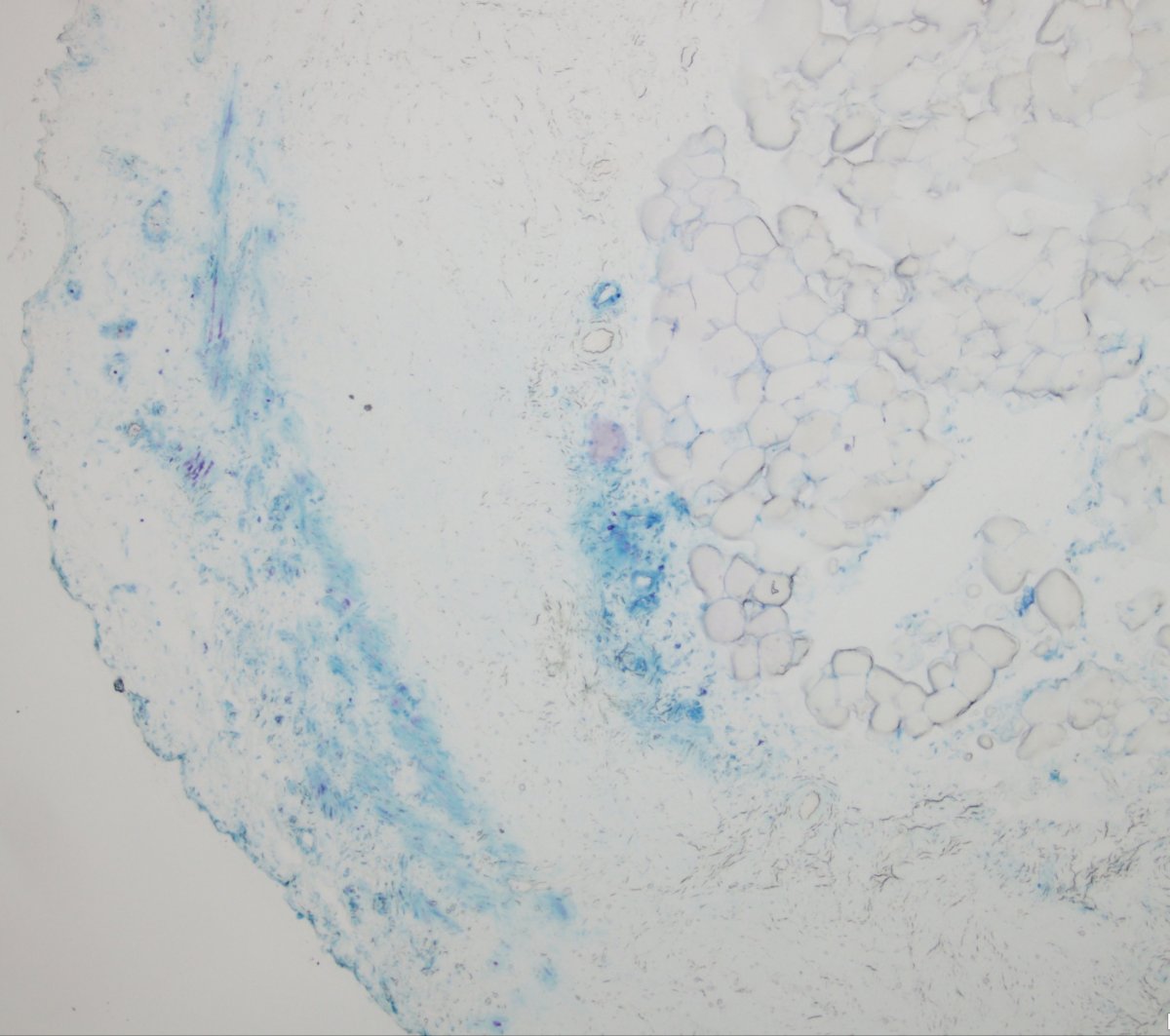 The image below shows the absorption of methylene blue in the control ureter. Unlike the experimental ureter, this ureter was only able to penetrate into the urothelium. 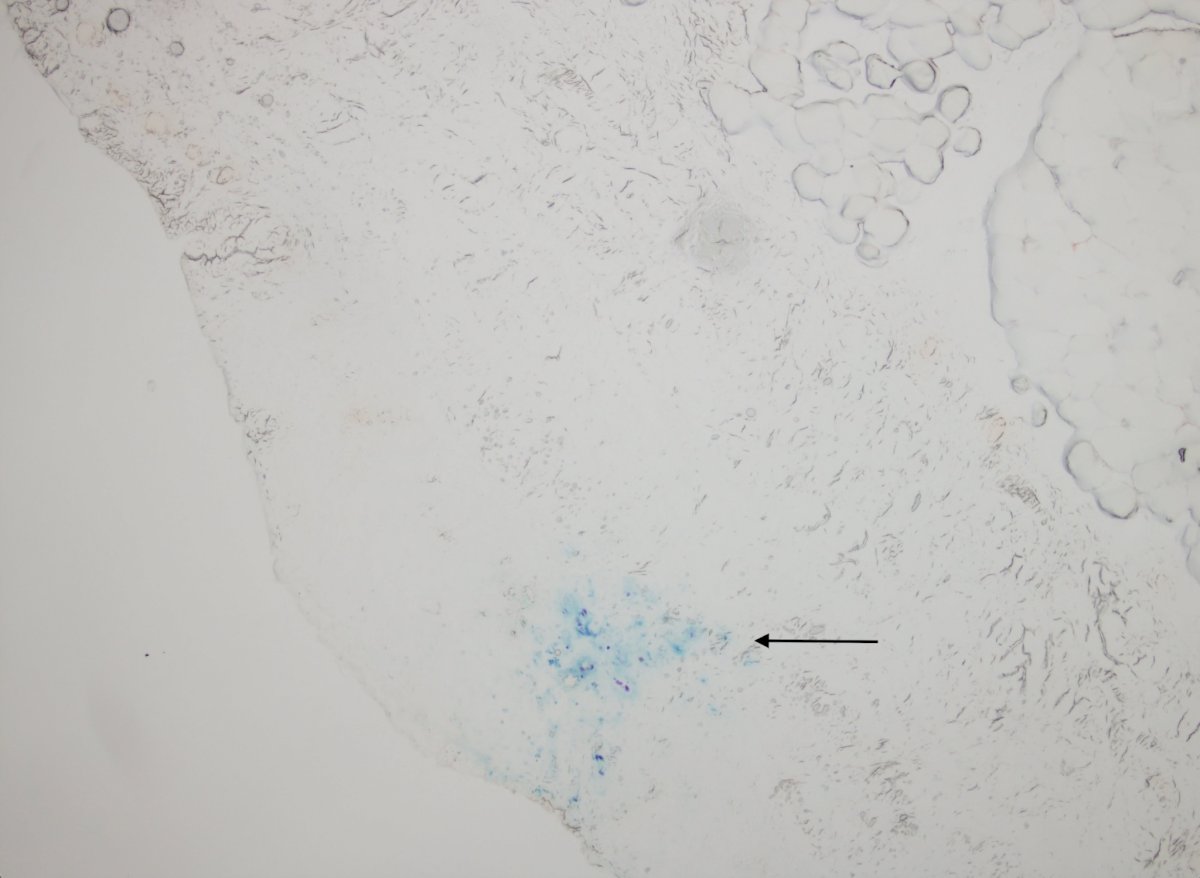 Upon further analysis of the ureters that underwent EMDA treatment, it was discovered that there was no major injury to the ureter. The image below reveals that the experimental side only experienced mild denudation of the urothelium and no deep tissue damage. 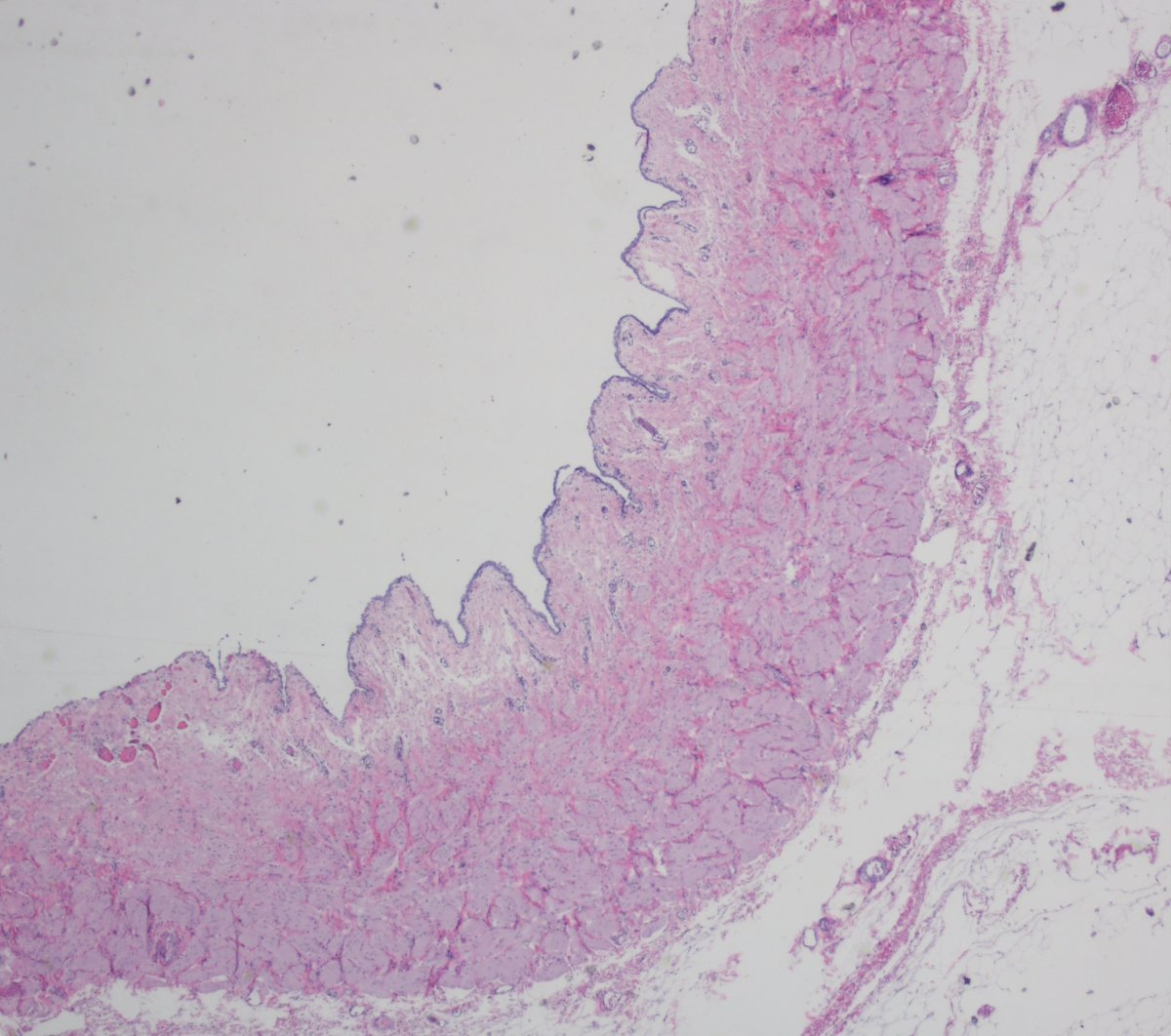 This study shows the success and potential that EMDA has as a new method of relaxing the ureter in the operating room. The results from this preliminary study show that this method is effective and safe.