To do so, the authors retrospectively examined 240 patients with recurrent prostate cancer following radical prostatectomy treated at three European tertiary centers. Patients were stratified into two groups according to clinical presentation: group 1, including patients with first biochemical recurrence (BCR, n=143) and group 2, including men with BCR after previous salvage treatments (n=97). Each patient underwent PSMA PET/CT for restaging purposes. Following PSMA PET/CT, those patients with PSMA PET/CT evidence of oligometastatic (≤3 lesions) disease underwent PSMA-targeted salvage treatments. In contrast, those patients with poly-metastatic disease (>3 lesions) on PSMA PET/CT underwent systemic therapy. Finally, those patients with negative PSMA PET/CT imaging were treated with non-imaging guided salvage therapy according to the risk of local or systemic recurrence. The authors considered differing outcomes in the two clinical scenarios: among those in group 1, the primary outcome was further BCR and radiologic progression while in group 2 further BCR, radiologic progression and occurrence of castration resistant prostate cancer (CRPC) were considered. Time to each of these events was examined using the Kaplan-Meier technique.

The authors identified 143 men with first biochemical recurrence (group 1). The median PSA at the time of PSMA PET/CT was 0.39 ng/ml in this cohort. Among the 143 patients, 68 (47.6%) men had positive PSMA PET/CT. Patients with positive PSMA PET/CT had higher median PSA at failure after salvage treatment (p=0.001) and shorter time to BCR (all p ≤0.01). Over a median follow up of 60 months, the BCR-free survival (BCR-FS) and radiologic progression-free survival (rP-FS) at 3-years were 74% vs. 64% and 90% vs. 80% in patients with negative and positive PSMA PET/CT, respectively, though these were not statistically significant differences (all p ≥0.05). 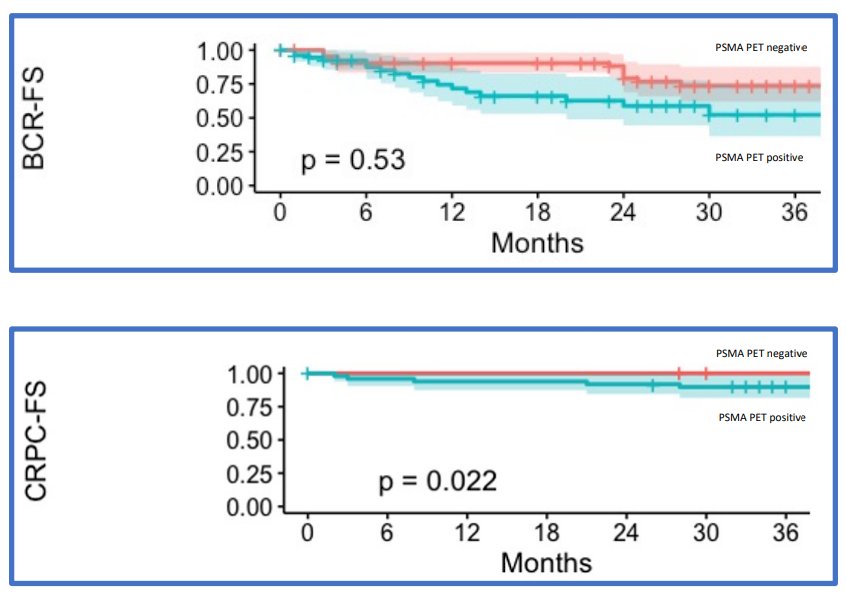 In the context of first biochemical recurrence, the authors conclude that men with positive PSMA PET/CT had comparable oncologic outcomes compared to men with negative PSMA PET/CT. In contrast, among those who had previously received salvage therapy, a positive PSMA-PET/CT is associated with worse oncologic outcomes despite increasing adoption of PSMA-guided treatment.