(UroToday.com) The 2022 American Urological Association Annual Meeting included a prostate cancer session featuring work from Dr. Mohammad Siddiqui and colleagues presenting results of their study investigating whether the presence of capsular ‘abutment’ on pre-operative mpMRI is an indication of prostate pathology in cancerous forms. Extraprostatic extension (EPE), defined as an extension of tumor into periprostatic soft tissue, is well established as an adverse prognostic indication for prostate cancer, specifically pointing to recurrence and metastasis. While the presence of EPE entails the strong possibility of aggressive disease characteristics, the presence of capsular ‘abutment’ or bulging has not been shown to predict pathological findings in the same manner. Thus, Dr. Siddiqui and colleagues sought to study the relation between capsular abutment and its ability to predict EPE.

This study was derived from a prospective institutional database from 2018 to 2021 for all men undergoing radical prostatectomy (RP) who also had preoperative mpMRI. In total, the database consisted of 442 patients undergoing RP with 102 patients being excluded for MRI and 45 patients excluded for focal EPE, leaving 295 included patients. MRIs were reviewed for the number of lesions, lesion laterality, and capsular abutment. Pathology was reviewed of EPE and its laterality. Statistical analysis was performed using t-test and chi-squared analysis.

Of the 295 included patients, within a group of 57 (20%) without abutment, 13 (22%) patients had EPE. Of 238 (80%) patients with abutment, 125 (53%) patients had EPE. While abutment was associated with higher PIRADS lesion and number of lesions, capsular abutment on MRI was determined to be a non-significant predictor of EPE on RP pathology. Independent predictors of EPE were a PSAD greater than 0.15-0.2, PIRADS 5, and grade group greater than or equal to 3. 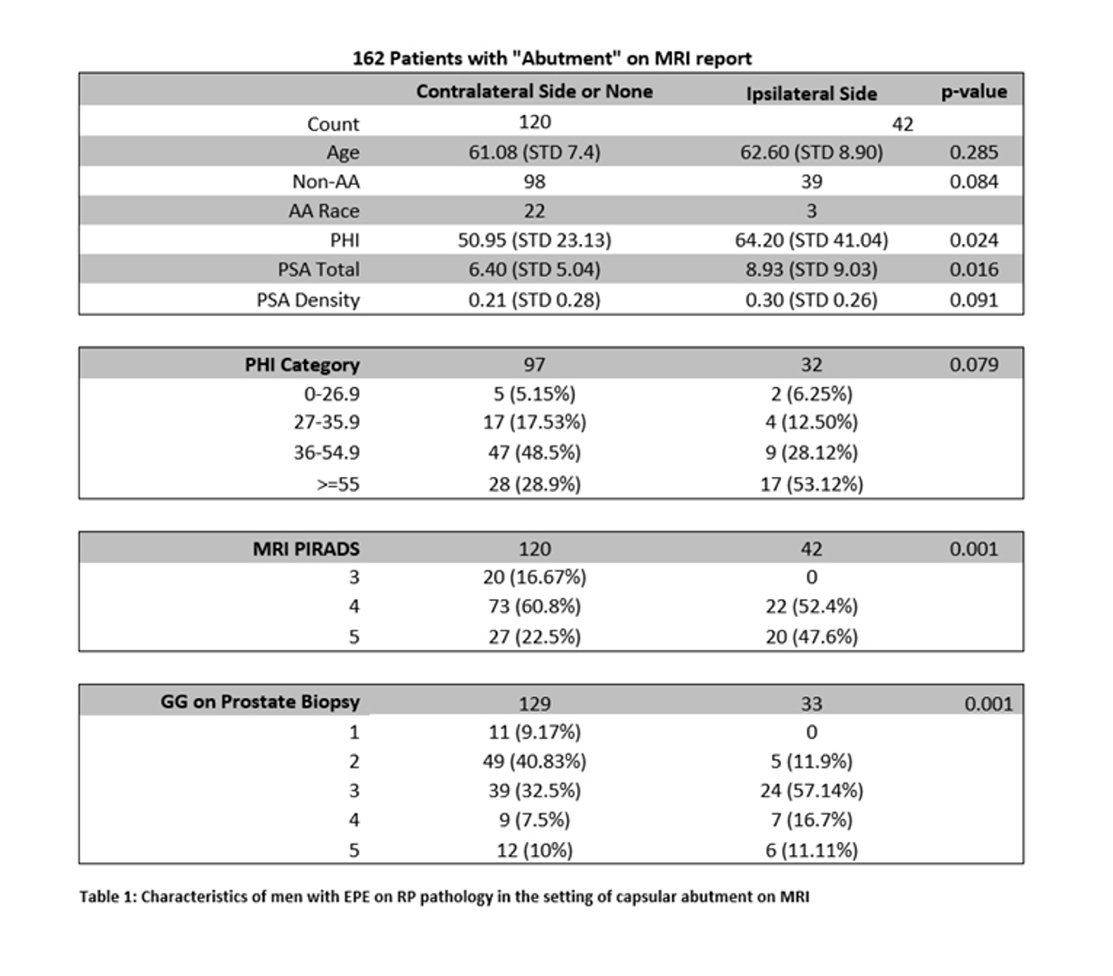 Based on the results, it appears that the presence or absence of capsular abutment had little predictive value on prostate pathology. In fact, men with ipsilateral EPE to their MRI lesions with capsular abutment were more likely to have a higher total prostate health index (PHI) and higher Gleason Grade Group (GG) lesion on diagnostic biopsy. On multivariable logistic regression analysis, MRI PIRADS scores were not predictive of the presence of EPE in general, or ipsilateral EPE on final RP pathology.

One of the moderators had a question about the classification of “abutment” and if a certain amount of contact or volume measurement was used. Dr. Siddiqui replied that while it was not commented on in the presentation, he separated out what he considered as “simple” abutment vs. more complex abutment (when there was a concern for extension through the capsule or capsular irregularity). Of these identified patients with concerning descriptions, 37 out of 45 (about 83%) had EPE or T3a or higher classification. However, when the complex abutment patients are entered back into the multivariate model, it trended strongly towards significance but did not quite achieve significance. Dr. Siddiqui notes that further work is needed to discern this relationship further.

Dr. Siddiqui concluded with the following take home messages for this study assessing the relationship between capsular abutment and the indication of prostate pathology and associated relation to extraprostatic extension: