(UroToday.com) In a podium presentation at the 2022 Society of Urologic Oncology Meeting held in conjunction with the American Urologic Association Annual Meeting held in New Orleans and virtually, Dr. Randy Vince discussed the interaction of race, social determinants of health, and cancer outcomes.

Dr. Vince began by introducing himself, as a current Society of Urologic Oncology fellow at the University of Michigan. Further, he serves on numerous committees with the American Society of Clinical Oncology in the context of social determinants of health, and increasing representation of in medicine. Moving forward, he is the incoming Director of Minority Men’s Health at Case Western/University Hospitals.

He began by overviewing the history of racist laws and policies in this country, with an emphasis of understanding on how the past (dating as far back as slavery) affects the present. To this end, while both White and Black people were initially enslaved, race was created in part to eliminate joint efforts between the races to escape slavery and to provide a justification for slavery. As a result of this effect, the concept of racialization emerged. Dr. Vince noted that, in the words of Ta-Nehisis Coates, “race, is the child of racism, not the father”. This emphasizes that racism underpins the creation of racial categorizations, rather than the product. 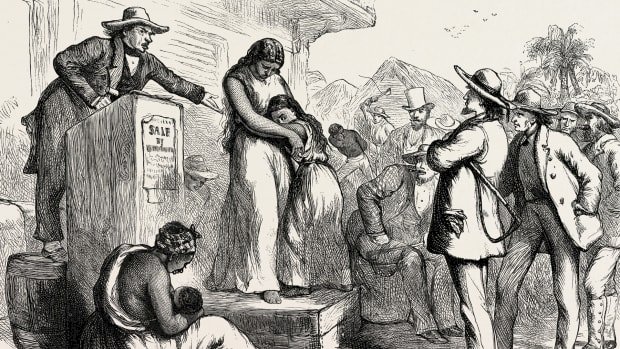 Given this, it is clear that race is a social construct. Likely as a result of this ambiguity, there have been a number of “blood fractioning rules” including the one-drop rule and the one-eighth rule. Further pseudo-scientific efforts such as eugenics have attempted to assign a biologic inferiority to Blacks. These beliefs led to efforts to suppress the education of Black citizens through criminalization, in an effort keep Black citizens oppressed. Further, racial policies were further codified through Jim Crow Laws which served to separate Blacks and Whites. Other institutional policies such as redlining served to marginalize Black populations further: redlining kept Blacks from the opportunity to own homes which impaired intergenerational transfer of wealth.

Dr. Vince then moved to discuss how these racial policies and laws contributed to identified disparities in social determinants of health. He first defined social determinants of health, in keeping with the Department of Health and Human Services, as the conditions in the environments where people are born, live, learn, work, play, worship, and age that affect a wide range of health, functioning, and quality-of-life outcomes and risks. Social determinants of health include such factors of safe housing, transportation, and neighborhoods; racism, discrimination, and violence; education, job opportunities, and income; access to nutritious foods and physical activity opportunities; polluted air and water; and language and literacy skills. These may be categorized in five domains: education access and quality; health care access and quality; economic stability; social and community context; and neighborhood and built environment. 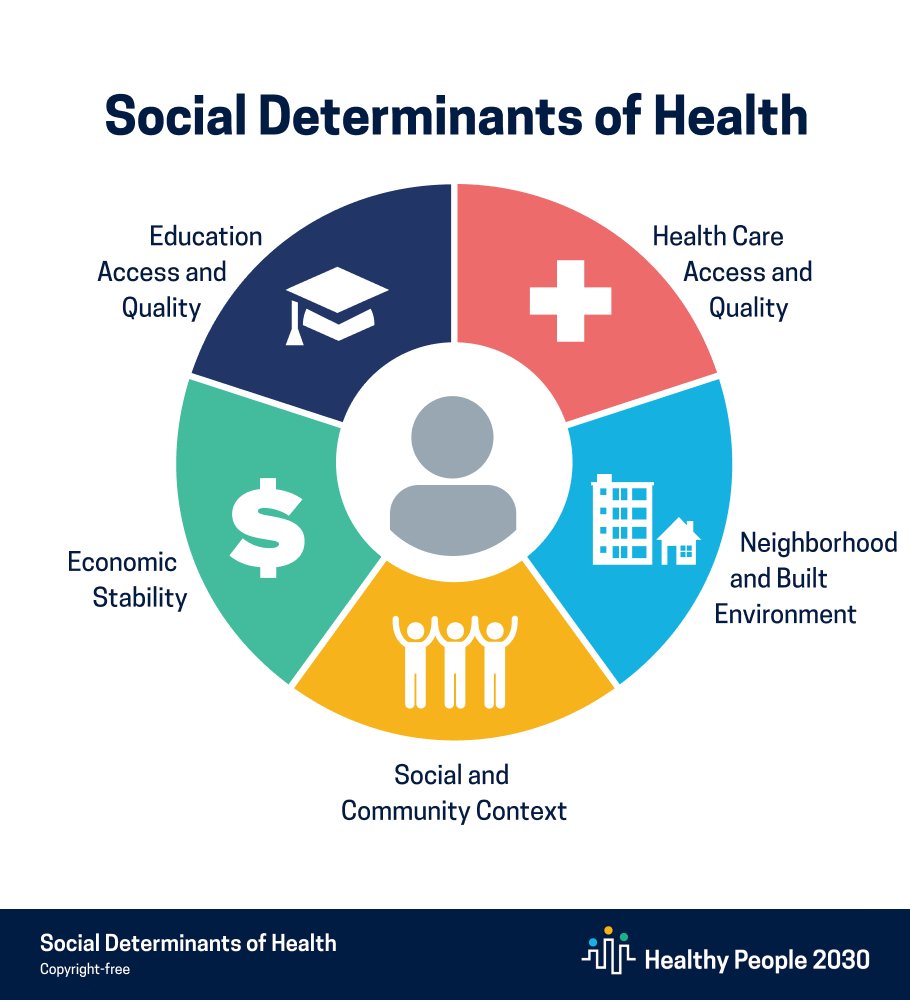 In this context, he first focused on health care access and quality. Black patients are more likely to be uninsured or underinsured; less likely to receive the same quality of care; and less likely to have preventative medicine visits when compared to White patients. Moving to domains that are less commonly discussed in medical circles, he first highlighted the importance of neighborhood and the built environment. He highlighted data demonstrating that higher pollution levels are found nationwide in areas where people of colour live. The authors of this work, as Dr. Vince quoted, explained this as follows: “The inequities we report are a result of systemic racism: Over time, people of color and pollution have been pushed together, not just in a few cases but for nearly all types of emissions.” To further highlight this issue, he discussed the example of contaminated water in Flint, Michigan. These issues in the built involvement also interact, as he further highlighted, with food insecurity which is more common among Black households.

In the social and community context, he highlighted that there is abundant literature demonstrating the association between neighborhood disadvantage and violent crime rates. Violent crime may serve as a stressor with deleterious health on population-level and individual health. This pattern is true even in regions with low levels of crime, such as in Stockholm, Sweden.

Fourth, he considered the effects of economic stability and the converse of poverty. He highlighted the overlap between maps of redlining from the 1930s and current distribution of poverty in many large US cities, using the example of Baltimore. Across all age groups, US census data demonstrates that Blacks are more likely to live in poverty. Dr. Vince noted that there is a cyclical effect of these policies which perpetuates forward to current day. For example, increased home vacancies and high volume leads to decreased property values, reduced property tax revenue, and lower school funding. 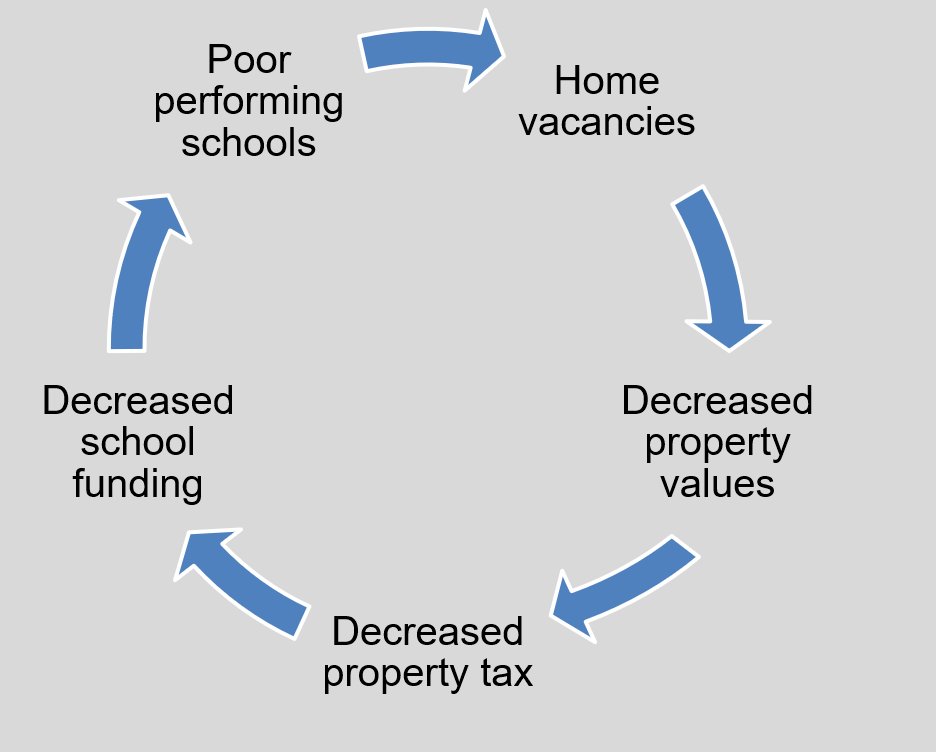 Finally, he closed by discussing educational access and quality. As alluded to before, data from the National School Boards Associations shows that Black students are more likely to like in poverty, more likely to attend high poverty schools, and less likely to have access to the internet. Conversely, recent work from the National Bureau of Economic Research showed that increased school funding leads to lower rates of incarceration and lower overall costs.

Dr. Vince then transitioned to discussing how these disparities in social determinants of health may lead to adverse effects on patient outcomes. First, regional wealth disparities may contribute to large differences (up to 20 years) in life expectancy. In the context of Baltimore, he noted that different neighborhoods may have life expectancy differences of 13-14 years. In the context of his pending move to Cleveland, data from that city demonstrated that moves of only a few miles may contribute to differences in life expectancy that exceed 10 years. Moving from overall mortality to cancer specific outcomes, he noted that poverty and cancer mortality are strongly associated after age-adjustment across many cancer types. 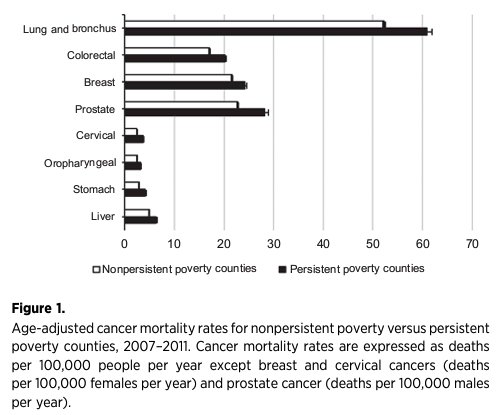 In the context of urologic oncology, there is an abundance of literature examining disparities in outcomes according to race in prostate cancer. However, very few of these studies acknowledge race and racism. Further, they fail to account for disparities in social determinants of health on prostate cancer outcomes. While there have been an increasing number of analyses in prostate cancer examining differences in outcomes across race, a very small number of study that acknowledge racism or mention race as a social construct. 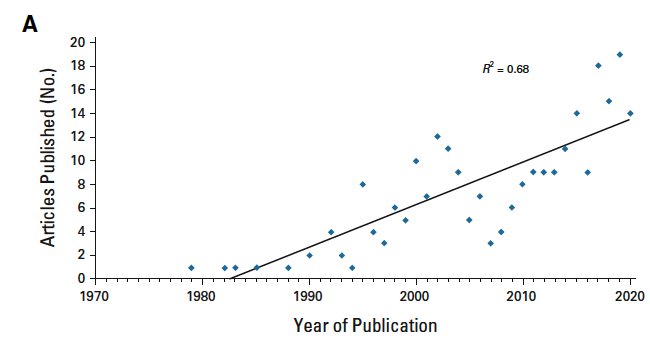 #1. Acceptance of race as a social construct
#2. Acknowledge the history of racism and its current day implications
#3. Recognize social determinants of health that effect patient’s health outcomes

To realize this vision he emphasized that, in the words of Mahatma Gandhi, to “be the change you wish to see in the world”.