Back to From the Editor Articles
Published 02 January 2020

Urination is not part of daily conversations, especially for girls and women. A skit performed on SNL (Saturday Night Live) on the 7th of July, 2019, revolved around the problem of nocturia in men. It presented the “PottyPM” device that allows for uninterrupted sleep for men. The device looked antiquated, like an external male “Texas” catheter.

At the end of the skit when Jennifer Lopez asks if the device can be used for women, the male actor seems embarrassed and naïve about a woman’s anatomy. He stumbles through an explanation about how the device could be used by a woman while wrongly addressing the clitoris and its role in urination. Lopez picks up on his errors and explains about the urethra and how it acts as a conduit for urine.  The skit then showed an illustration of how the device could (not) be used by a woman and wrongly explained our anatomy. The scene ends with Lopez saying, “It is just something for guys and that is okay, fine.” The male actor suggests we “sleep on the toilet”!

I, like probably most who viewed the skit, thought it was funny and accurate to what life is like for girls and women. But the skit illustrated the inconvenience of voiding, in this instance at night, and the embarrassment associated with female voiding. I thought about the National Institute of Diabetes and Digestive and Kidney Diseases’ Prevention of Lower Urinary Tract Symptoms (PLUS) research consortium which is promoting dialogue on lower urinary tract symptoms through conversations with girls and women about bladder health. A recent paper by Williams presented the consortium’s research on adolescent girls' and women’s lay language related to bladder function1. I was involved in this research and from it, I came to the realization that the terminology used in daily practice to identify bladder function and symptoms is probably not being understood by most of our patients. The SNL skit reminded me of this research. PLUS is trying to expand our knowledge about what girls and women know and do about bladder issues. In November, as a campaign for Bladder Health Month, they released positive bladder memes that highlighted women’s daily thoughts on keeping healthy bladder function. These memes, seen below, were released on social media platforms such as Facebook and Twitter. 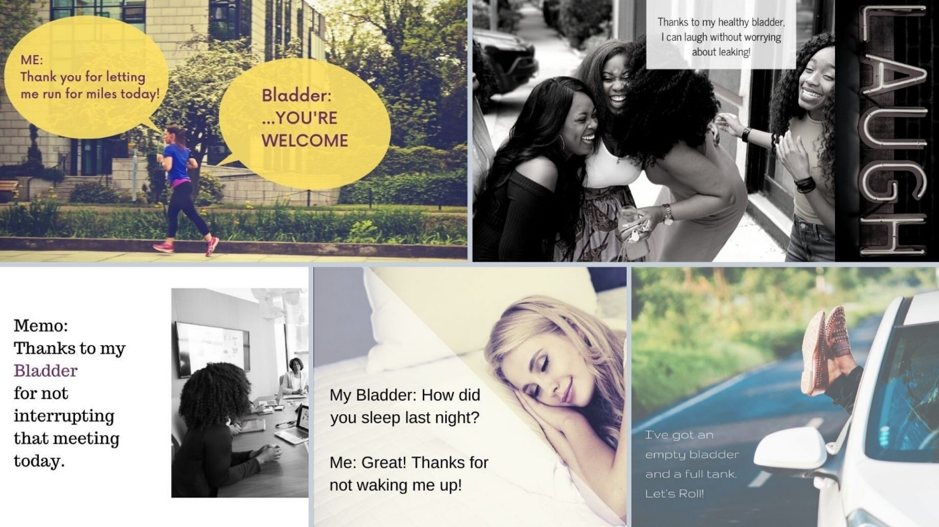