We first conducted an electronic search of the National Guideline Clearinghouse® (Agency for Healthcare Research and Quality), Medline® (National Library of Medicine) using the Ovid® Platform (Ovid Technologies, Wolters Kluwer, New York, NY), the Cochrane®Health Technology Assessment Database (Cochrane Collaboration, Oxford, UK), the NIH Consensus Development Program, and the United States Preventive Services Task Force database for existing national and international guidelines relevant to CAUTI. The strategy used for the guideline search and the search results can be found in Appendix 1A. A preliminary list of key questions was developed from a review of the relevant guidelines identified in the search.1,35,36 Key questions were finalized after vetting them with a panel of content experts and HICPAC members.

Following the development of the key questions, search terms were developed for identifying literature relevant to the key questions. For the purposes of quality assurance, we compared these terms to those used in relevant seminal studies and guidelines. These search terms were then incorporated into search strategies for the relevant electronic databases. Searches were performed in Medline®(National Library of Medicine) using the Ovid® Platform (Ovid Technologies, Wolters Kluwer, New York, NY), EMBASE® (Elsevier BV, Amsterdam, Netherlands), CINAHL® (Ebsco Publishing, Ipswich, MA) and Cochrane® (Cochrane Collaboration, Oxford, UK) (all databases were searched in July 2007), and the resulting references were imported into a reference manager, where duplicates were resolved. For Cochrane reviews ultimately included in our guideline, we checked for updates in July 2008. The detailed search strategy used for identifying primary literature and the results of the search can be found in Appendix 1B.

Titles and abstracts from references were screened by a single author (C.V.G, R.K.A., or D.A.P.) and the full text articles were retrieved if they were 1) relevant to one or more key questions, 2) primary analytic research, systematic reviews or meta-analyses, and 3) written in English. Likewise, the full-text articles were screened by a single author (C.V.G. or D.A.P.) using the same criteria, and included studies underwent a second review for inclusion by another author (R.K.A.). Disagreements were resolved by the remaining authors. The results of this process are depicted in Figure 2. 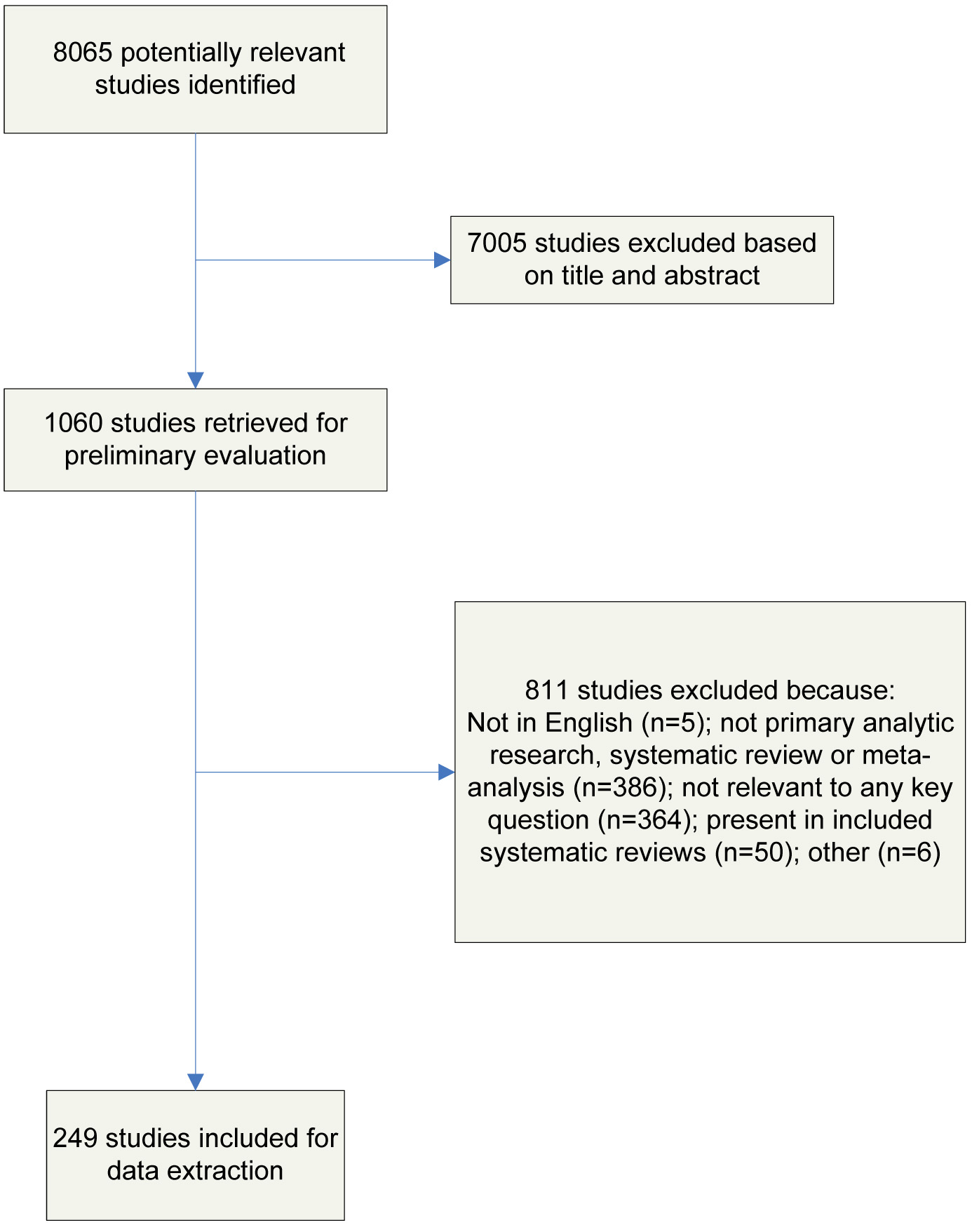 Data on the study author, year, design, objective, population, setting, sample size, power, follow-up, and definitions and results of clinically relevant outcomes were extracted into evidence tables (Appendix 2). Three evidence tables were developed, each of which represented one of our key questions. Studies were extracted into the most relevant evidence table. Then, studies were organized by the common themes that emerged within each evidence table. Data were extracted by one author (R.K.A.) and cross-checked by another (C.V.G.). Disagreements were resolved by the remaining authors. Data and analyses were extracted as originally presented in the included studies. Meta-analyses were performed only where their use was deemed critical to a recommendation, and only in circumstances where multiple studies with sufficiently homogenous populations, interventions, and outcomes could be analyzed. Systematic reviews were included in our review. To avoid duplication of data, we excluded primary studies if they were also included in a systematic review captured by our search. The only exception to this was if the primary study also addressed a relevant question that was outside the scope of the included systematic review. Before exclusion, data from the primary studies that we originally captured were abstracted into the evidence tables and reviewed. We also excluded systematic reviews that analyzed primary studies that were fully captured in a more recent systematic review. The only exception to this was if the older systematic review also addressed a relevant question that was outside the scope of the newer systematic review. To ensure that all relevant studies were captured in the search, the bibliography was vetted by a panel of clinical experts.

Table 3. Rating the Quality of Evidence Using the GRADE Approach

In some instances, multiple recommendations emerged from a single narrative evidence summary. The new HICPAC categorization scheme for recommendations is provided in Table 1.

It should be noted that Category II recommendations are discretionary for the individual institution and are not intended to be enforced.

The category "No recommendation/unresolved issue" was most commonly applied to situations where either 1) the overall quality of the evidence base for a given intervention was low to very low and there was no consensus on the benefit of the intervention or 2) there was no published evidence on outcomes deemed critical to weighing the risks and benefits of a given intervention. If the latter was the case, those critical outcomes will be noted at the end of the relevant evidence summary.

Reviewing and Finalizing the Guideline

After a draft of the tables, narrative summaries, and recommendations was completed, the working group shared the draft with the expert panel for in-depth review. While the expert panel was reviewing this draft, the working group completed the remaining sections of the guideline, including the executive summary, background, scope and purpose, methods, summary of recommendations, and recommendations for guideline implementation, audit, and further research. The working group then made revisions to the draft based on feedback from members of the expert panel and presented the entire draft guideline to HICPAC for review. The guideline was then posted on the Federal Register for public comment. After a period of public comment, the guideline was revised accordingly, and the changes were reviewed and voted on by HICPAC. The final guideline was cleared internally by CDC and published and posted on the HICPAC website.

Future revisions to this guideline will be dictated by new research and technological advancements for preventing CAUTI and will occur at the request of HICPAC.