DUBAI, UAE (UroToday.com) - There is evidence that child-bearing results in higher risk of incontinence - but is the development of urinary incontinence (UI) due to pregnancy itself or to the mechanics of childbirth?

Wesnes and colleagues (2009) conducted a population-based study on delivery methods. The study included 12,000 Norwegian primiparous women. At 6 months postpartum, 31% reported UI. Of these women who reported UI, 36% were delivered using instruments, 34% was spontaneous delivery and 17% had a vaginal delivery. Acute (17%) or elective (13%) cesarean section was also reported.

What is known is that each subsequent childbirth increases a woman’s chance of developing UI.

According to a study by Hermansen (2010), women are inadequately informed about the possibility of developing postpartum UI and there needs to be multidisciplinary teams who pay more attention to developing a coordinated approach to informing pregnant and post partum women about UI and pelvic floor muscle (PFM) exercises. 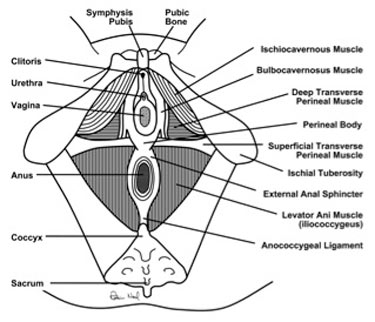 There can be a significant effect of pregnancy on the PFM and both nerve and mechanical trauma have been implicated. Denervation injury of the pelvic floor may occur from traction and straining during vaginal delivery. Endopelvic fascia and muscles and the nerve supply to internal and external sphincters are susceptible to damage from stretching and compression during delivery. Pudendal nerve innervates the anal (inferior hemorrhoidal)and urethral (perineal and) sphincters and it is vulnerable to traction and the compressive forces of pregnancy, labor and delivery. Denervation injuries of the pubococcygeus and external sphincter muscles have been reported after 42–80% of vaginal deliveries (Snooks, 1984; Allen, 1990). Presence of neuropathy is found to be related to the length of the second stage of labor, size of the baby, and instrumental delivery (Snooks, 1990). Pelvic floor damage from childbirth can be measured objectively by the use of MRI of the levator ani complex. Nulliparous women do not have defects in levator ani musculature as evaluated by MRI. Up to 20% of primiparous women develop defects in the levator ani after vaginal birth. Defects occur most commonly in the pubovisceral portion of the levator ani. Levator ani injuries have been shown to be associated with stress UI.

A Cochrane review in 2008 found some evidence that PFMT in women having their first baby can prevent UI in late pregnancy and postpartum. In common with older women with SUI, there is support for the widespread recommendation that PFMT is an appropriate treatment for women with persistent postpartum UI. And the review noted that it is possible the effects of PFMT might be greater with targeted rather than population-based approaches and in certain groups of women (e.g. primiparous women, women who had bladder neck hypermobility in early pregnancy, a large baby, or a forceps delivery). The review went on to note that pregnancy, type of delivery and postpartum state increase the risk of developing FI and UI. Preventative strategies should include promoting increased general education of pelvic floor issues in all young reproductive-aged women, avoidance of operative delivery and episiotomy, targeting intervention to high-risk women (e.g. women sustaining sphincter tears, women with UI, FI prior to pregnancy, during pregnancy, postpartum, etc.).

In 2009, an NIH State-of-the-Science Conference on Prevention of FI & UI in Adults noted that pelvic floor muscle training (PFMT) and biofeedback are effective in preventing and reversing UI in women for the first postpartum year, but research is needed to determine incidence of UI, to classify persons according to their future risk and to design interventions targeted to at-risk groups

Ms. Newman went on to discuss PFMT, which is done to strengthen the muscles that support the pelvic organs. It is often referred to as “Kegel” exercises. According to the Cochrane review, the more intensive the PFMT program, the greater the treatment effect. The goal of PFMT is to improve urethral resistance and urinary control through the active exercise of the PFM and has 3 components: 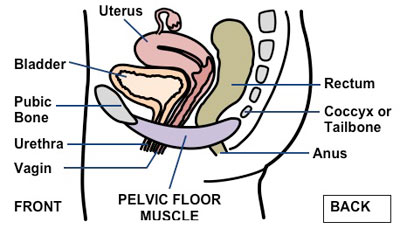 The clinician should palpate the muscle during a digital vaginal exam by inserting 1 or 2 fingers into vagina up to first knuckle and asking the patient to contract and relax the pelvic muscle. If the correct muscles are contracted, the clitoris descends and the anus retracts.

However, Ms. Newman noted that the most effective parameters are unclear. Parameters selected based on the treatment goal, e.g., strength, endurance, coordination, or function. Strength training is small numbers of maximal or near maximal contractions held for short periods (2 seconds) repeated once or more daily, at least 3 days/week. Endurance training is performing a moderate number of daily, submaximal contractions held for long periods (5 to 10 seconds). Coordination and functional training is performing voluntary contractions timed with activities, in different body positions, and with varying task difficulty. 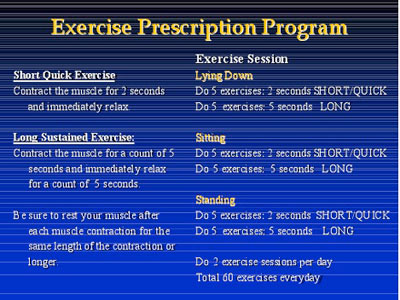 An important part of PFMT is to perform the ‘knack,” an intentional, strong, and fast muscle contraction. It should be performed before and during activity that causes leakage (e g, laughing, coughing, sneezing). IF consistently done, it can become as automatic as a reflex. Other names for the same knack maneuver include pelvic flex or clutch, perineal lock, quick Kegel and women often refer to it as “holding back.”

Biofeedback can provide high quality PFM measurements and is a necessary tool for many women - as without proper instruction, proper muscle contraction is not correctly performed. Common errors include overflow 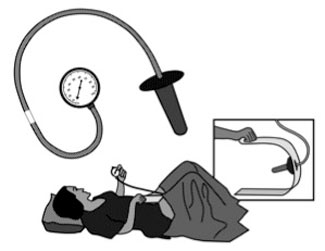 breath holding, exaggerated inspiration, and bearing down – valsalva. Biofeedback can also document change (or lack of change) in PFM function, and strength relies on accurate pre- and post-training measurement. Biofeedback does not represent an intervention by itself, but rather, it represents techniques that use electronic or mechanical devices to display information to patients regarding their physiologic activities or function. Ms. Newman feels it is an important part of her practice as it provides immediate patient feedback, through auditory and visual information. Dr. Kegel described the first biofeedback unit shown in the picture to the right – it was called a “perineometer.” She uses external surface skin electromyography (EMG) and can take simultaneous multi-measurements. This type of therapy shows intensity and frequency of muscle activity. EMG is the measure of electrical activity of skeletal muscle. Increased electrical activity is a result of more muscle activity, however, it is not a measure of force. There is controversy as to whether EMG is superior to vaginal palpation in all but one variable (lift), and the concern is about the reliability of EMG measurements. Cross-talk and variations in placement of the electrode can decrease the quality of signal form comparisons.

The opinions expressed in this article are those of the UroToday.com Contributing Medical Editor and do not necessarily reflect the viewpoints of the Pan Arab Continence Society.