(UroToday.com) There has been a rapid evolution in treatment options for patients with non-metastatic castration-resistant prostate cancer since the spring of 2018. Up until the presentation of SPARTAN and PROSPER trials, reporting on the use of apalutamide and enzalutamide in non-metastatic castration-resistant prostate cancer, at GU ASCO in February 2018, there were no specifically approved treatment options for these patients. These agents, as well as darolutamide, were subsequently approved on the basis of demonstrated improvements in metastasis-free survival. While metastasis-free survival has been shown to be a reasonable surrogate for overall survival in this population, there were questions as to whether the benefit of using androgen-axis inhibitors would translate to overall survival benefits, in part due to the differential survival effect seen according to disease burden in CHAARTED. While overall survival data from SPARTAN have been previously reported, Karim Fizazi, MD, PhD, and colleagues present the overall survival data assessing darolutamide in non-metastatic castration-resistant prostate cancer from ARAMIS in the Poster Discussion section of the 2020 American Society of Clinical Oncology Virtual Annual Meeting.

As a brief reminder, darolutamide is an androgen receptor inhibitor with a structure distinct from apalutamide and enzalutamide. Perhaps as a result of this structural difference, indirect comparisons from network meta-analysis have shown it to have a favorable safety profile compared to these other agents.

The methodology of the ARAMIS trial has been previously reported in the initial publication of this trial. To briefly summarize, the authors accrued 1509 patients with nmCRPC who were subsequently randomized 2:1 to darolutamide 600 mg twice daily (n=955) or PBO (n=554). All patients continued ADT. The trial was designed and powered to assess the primary outcome of metastasis-free survival. However, in this presentation, the authors focused on maturing data on secondary outcomes including overall survival, and times to pain progression, first cytotoxic chemotherapy, and first symptomatic skeletal event. The overall survival analysis was planned for when approximately 240 deaths had occurred. Secondary endpoints were evaluated in a hierarchical order.

As a result of the treatment benefit of darolutamide demonstrated in the primary analysis of metastasis-free survival, patients underwent unblinding. As a result, there was a cross-over of 170 patients from placebo to darolutamide.

The authors performed this reported final analysis after 254 deaths had occurred (15.5% of DARO and 19.1% of PBO patients). While the median overall survival was not reached in either the darolutamide or placebo arms, Cox proportional hazard modeling demonstrated a 31% relative reduction in the risk of death (hazard ratio 0.69, 95% confidence interval 0.53 to 0.88) in spite of the aforementioned cross-over.

As highlighted in the Table, darolutamide showed consistent benefit across the remainder of secondary outcomes including times to pain progression, first cytotoxic chemotherapy, and first symptomatic skeletal event.

At the updated analysis, there were no differences in the identified adverse event profile as compared to the initial publication of ARAMIS. 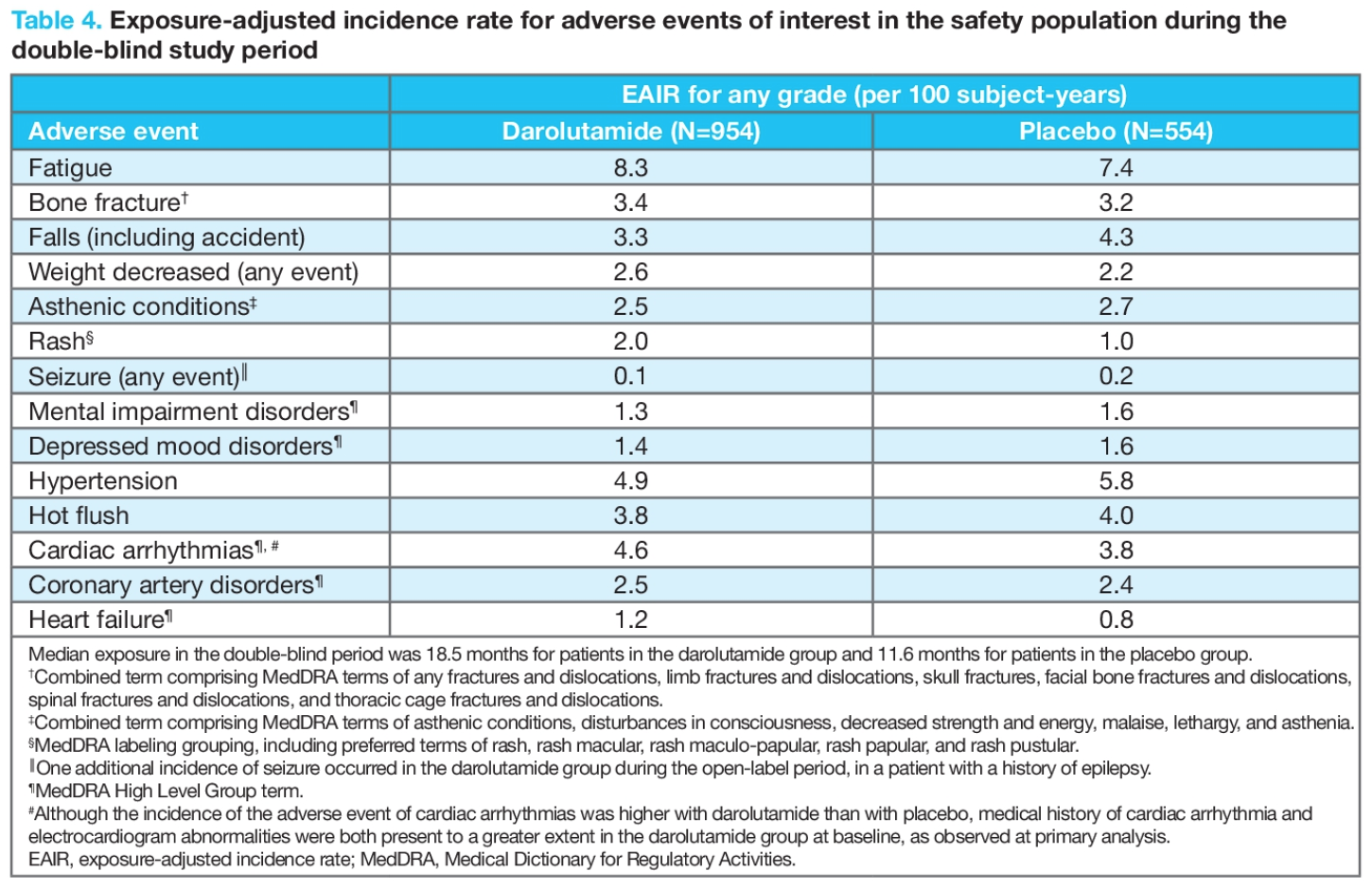 The authors conclude that darolutamide, compared to placebo, is associated with an overall survival benefit in men with non-metastatic castration-resistant prostate cancer.

Presented by: Karim Fizazi, MD, PhD, Head of the Department of Cancer Medicine at the Institut Gustave Roussy, Villejuif, France