This website uses cookies to ensure you get the best experience on our website. Privacy Policy
Published 17 December 2019
Many transmasculine individuals seeking phalloplasty desire an aesthetic penis and scrotum that has urinary and sexual function. Most desire phalloplasty with urethral lengthening, vaginectomy, scrotoplasty, and perineal reconstruction—all performed in a “single-stage.” Despite the moniker “single-stage phalloplasty”, the operation to achieve urinary and sexual function typically involves two stages: phalloplasty with urethral lengthening, vaginectomy, scrotoplasty, and perineal reconstruction, with their associated procedures, followed approximately 12 months later by prosthetic surgery. Some surgeons will further “stage” phalloplasty by dividing the urologic portions (vaginectomy, scrotoplasty, urethroplasty) from the microsurgical portions (neophallus creation) of the procedure. Single-stage phalloplasty involves a microsurgical team and a reconstructive urologist. Both teams work simultaneously: the microsurgeons harvest the flap, dissect the cutaneous nerve(s) and vascular pedicle and create the pars pendulans (PP) urethra, neophallus, and glans. The urologist simultaneously performs the vaginectomy, pars fixa (PF) urethroplasty, dorsal nerve dissection, and scrotoplasty with perineal reconstruction. 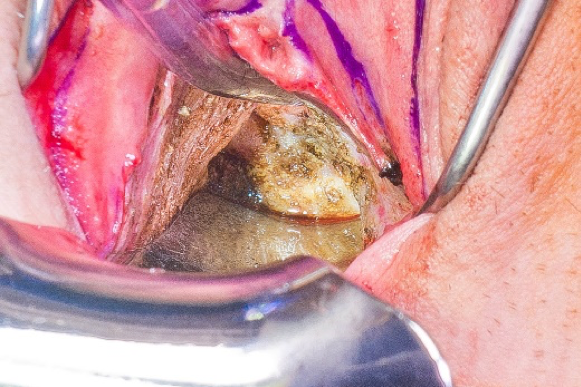 The labia minora is marked and local flaps are created around the native urethral meatus for pars fixa urethroplasty. Patients with a large clitoris and plentiful labia minora tissue undergo U-shaped urethroplasty (Fig 2). 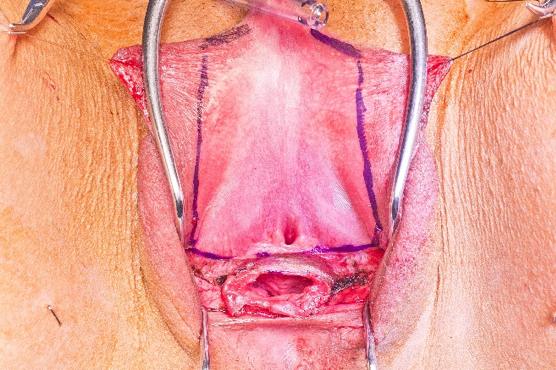 Patients with smaller clitorises with deficient labia minora may benefit from a ring flap urethroplasty (Fig 3). This allows tension-free translocation of the distal PF urethral meatus to the mons pubis. The periurethral fornices are also de-epithelialized to allow for cylindrical urethral reconstruction with resultant standard urethral catheter insertion. 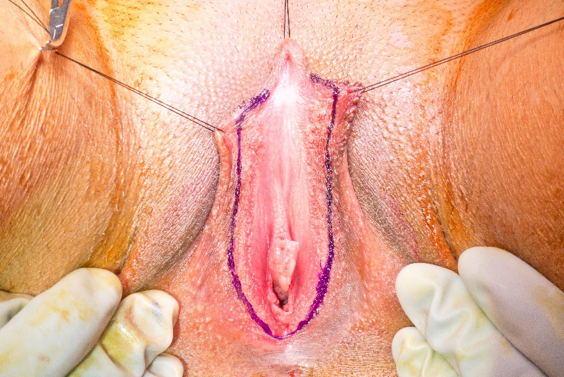 Fig 3B. Ring Flap dissection. The periurethral fornices are de-epithelialized. The ring is transected in the midline and bilateral labia minora flaps are demarcated. 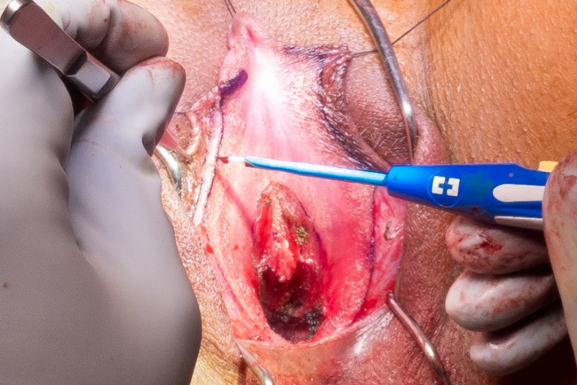 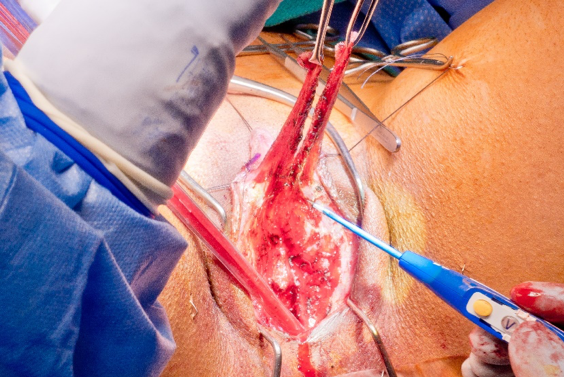 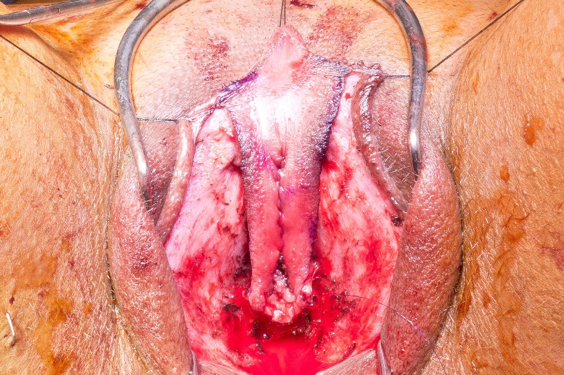 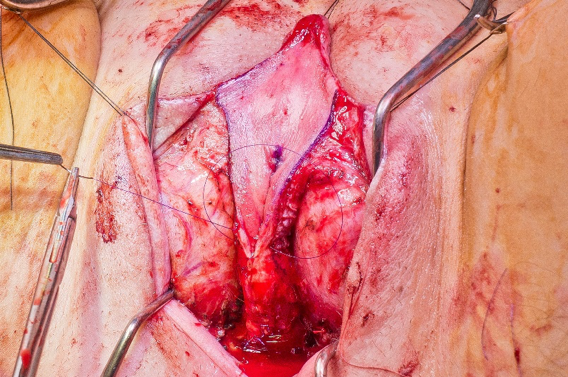 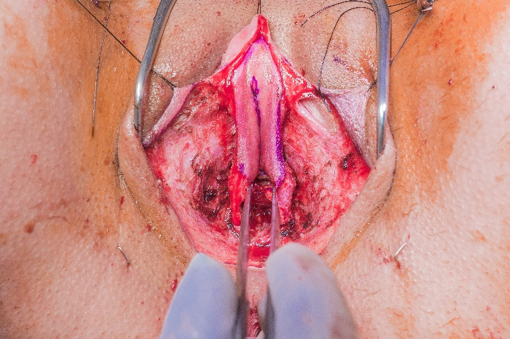 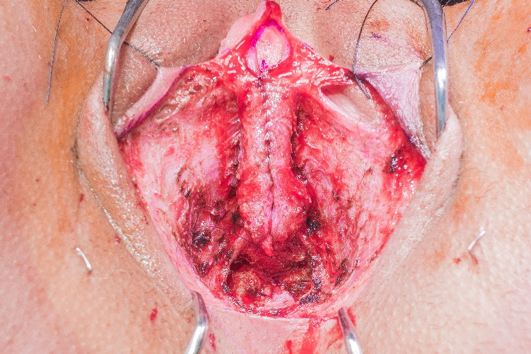 The clitoris is subsequently de-epithelialized and the suspensory ligament transected.  We then isolate one of the dorsal nerve bundles, which is identified between the corpora cavernosa and Buck’s fascia (Fig 5). 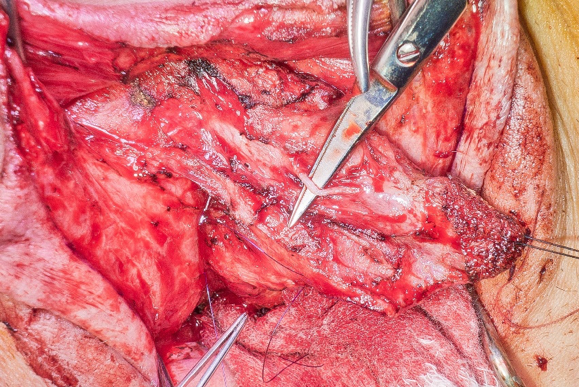 An opening is then made overlying the pubic symphysis, and the distal PF urethra and de-epithelialized clitoris are translocated to the infra pubic position (Fig 6). The urethral catheter is then inserted to facilitate perineal reconstruction. 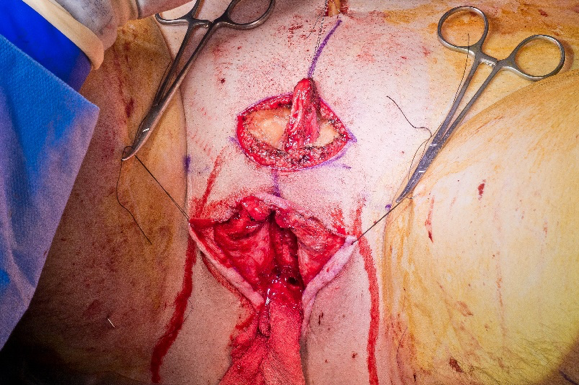 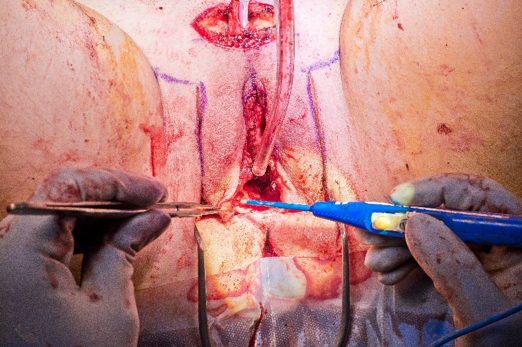 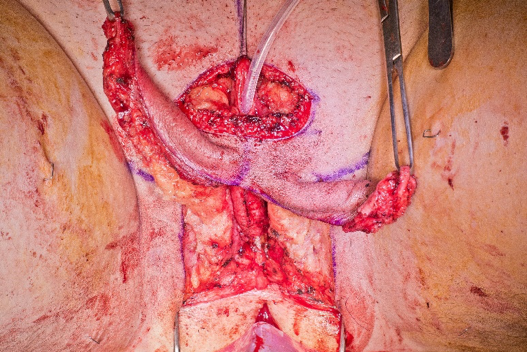 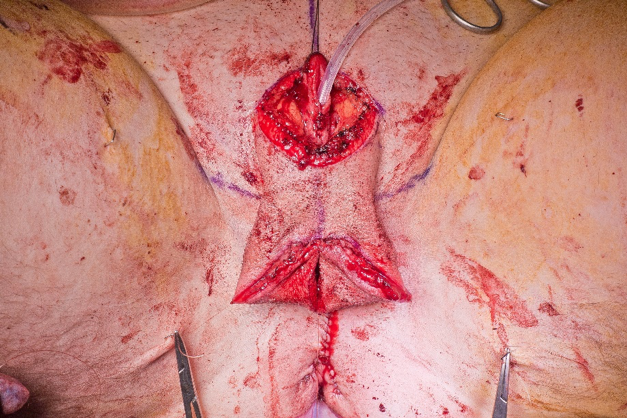 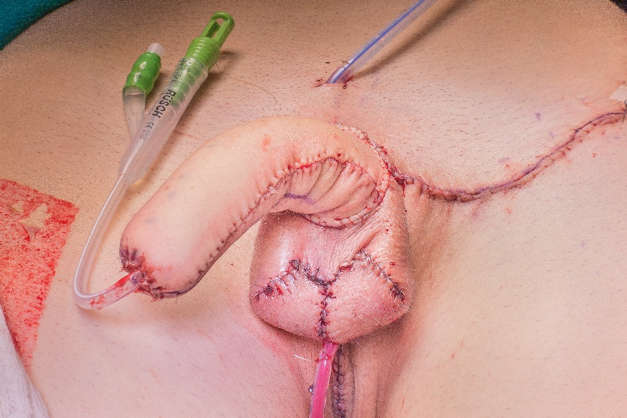 Fig 8A. Perineal reconstruction begins with closure of the bulbospongiosus layer over the PF urethral suture line. 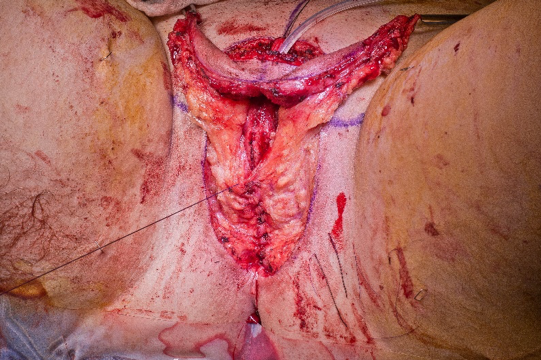 Fig 8B. Perineal reconstruction complete. An inverted Y closure of the perineum decreases the occurrence of a perineal divot. 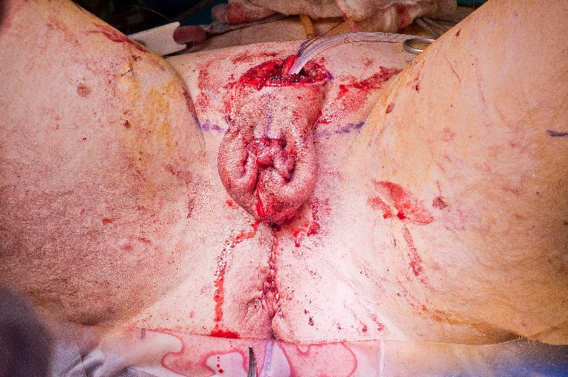 As the reconstructive urologist completes the genital masculinization of the perineum, the microsurgical team harvests the radial forearm (RF) free flap or anterolateral thigh (ALT) pedicled (or free) flap and fashions it into the neophallus and pars pendulans urethra (Fig 9).

Fig 9A. Radial Forearm flap has been elevated and the urethral and phallus component separated by a de-epithelialized segment. 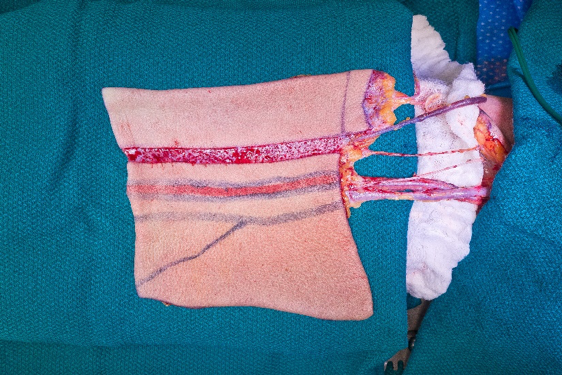 Fig 9B. Phallus component of the flap has been wrapped around the urethra, and the glansplasty with meatoplasty have been completed. 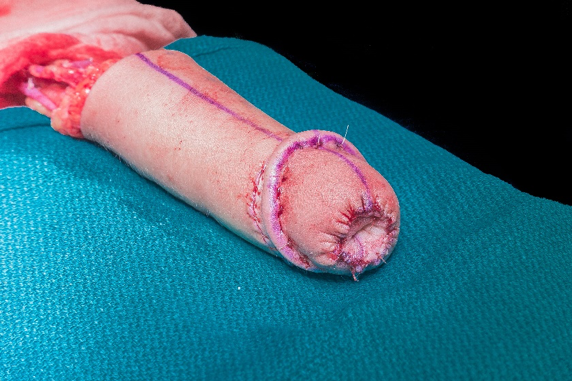 In RF phalloplasty, the microsurgeons will subsequently make an incision in the groin to expose the femoral vessels. The flap vessels are then divided and the neophallus is brought towards the midline infra pubic position. The urologist performs the urethral anastomosis (Fig 10). 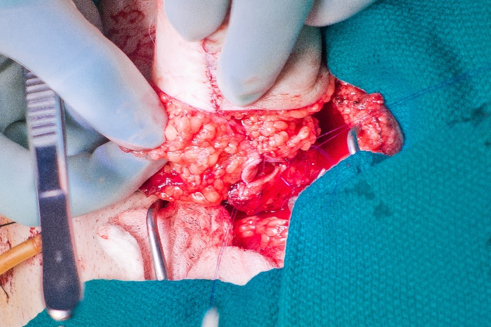 Utilizing an operative microscope, the microsurgeons complete the coaptation between the dorsal nerve and lateral antebrachial or lateral femoral cutaneous nerve followed by the vascular anastomoses of the flap. The neophallus is then fully inset and the wounds are closed (Fig 11). 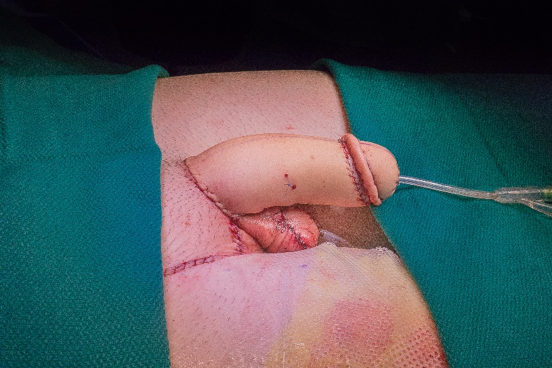 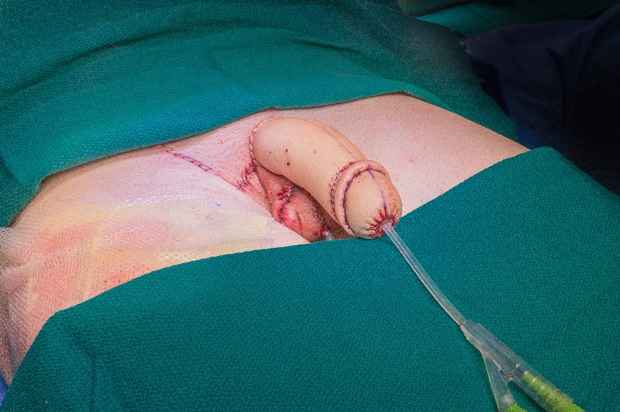 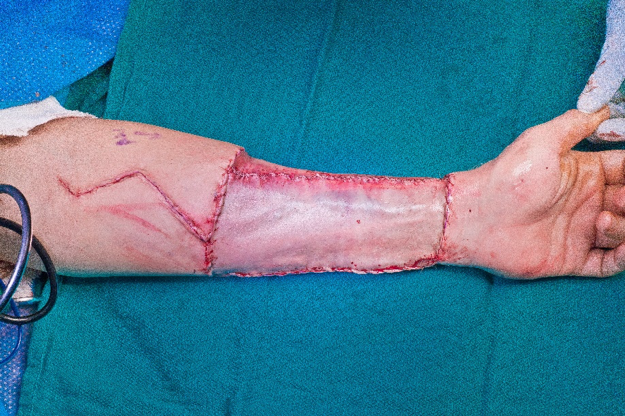 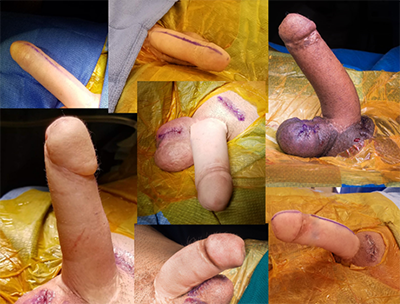 Male genital aesthetics and urinary function can be achieved in a single stage via phalloplasty with urethroplasty, vaginectomy, scrotoplasty, and perineal reconstruction. Sexual function via prosthetic surgery is offered after patients develop protective tactile sensation in their neophallus and are voiding reliably. Patients with urethral complications require repair prior to the insertion of implants.