It is estimated that over 73 million couples globally are infertile. Almost half involve a male factor. Standard semen analysis diagnoses only about half of these cases. A new test of sperm function adds important complementary information to the traditional testing model, and may become a new standard of care.

Here, Alexander J. Travis, PhD, Associate Professor at Cornell University, and a principal of a new company, Androvia LifeSciences, explains how an original assay he and colleagues have developed and are bringing to market, may assist couples who are seeking to be parents but have not had success learn why.

Q: Dr. Travis, you and your colleagues have reported that male infertility is a large and escalating problem. How large is the issue?

About 10 to 15% of couples have problems with fertility. Previously, infertility was thought to be a woman’s health problem. Now we know that in the U.S., about 40% to 50% of infertility involves the male partner. In some other countries, the problem is even higher. This is a problem that is global in nature: there are currently about 73 million infertile couples globally.

Q: What is known about the possible reasons for an increase in cases of male infertility?

There are different ideas as to why the problem of male infertility seems to be growing. A large part of why we are seeing more men present with male infertility is the more recent recognition that infertility is a problem for men too. The burden used to just fall on the female partner: if there was a fertility problem, [only] the woman would receive a workup. But that is not the case today.

Q: Traditional semen analysis addresses only a portion of male infertility cases. You point out the standard analysis of male infertility provides little information about the sperm’s “functional competence.” Could you comment further on this shortcoming of current testing and its impacts?

Semen analysis is still the cornerstone of male fertility workups. Men with [defects] in sperm function represent about half of cases of male infertility. Yet, right now, men are only diagnosed after repeated failed attempts at natural conception and at intrauterine insemination. This imposes huge emotional, physical, and financial stresses on couples that are trying to have a child.

Q: I understand that male infertility might not be identified until a man has undergone repeated testing and even then, the answer may be inconclusive.

After semen analysis is done, and assuming the man passes that, couples often tries intrauterine insemination. If his semen analysis remains normal, and [the couple] still has difficulty conceiving after three, four, five cycles of IUI, eventually a diagnosis of ‘idiopathic’ infertility is made. What is believed is that many of these men actually have defects in sperm function, but there’s been no commonly available test to diagnose that.

If we can determine sperm function prior to deciding whether to do IUI or go straight to ICSI, we can spare couples with defects in sperm function the cost and stress of cycles that are likely destined to fail from the outset. And conversely, if men have good sperm function, then those couples can pursue IUI initially. In a nutshell, providing clinicians with key information to help them counsel their patients is what we are aiming to do with the Cap-Score Sperm Function Test.

Q: New research by you and your and your colleagues addresses issues of sperm function, or dysfunction. Could you describe these findings?

In a poster that we presented at the American Society of Andrology recently1 we show data from a group of men who are having difficulty conceiving. A lot of these men have a normal concentration of sperm and sperm motility, but our test of sperm function revealed that close to 40% have a lower ability to capacitate.

A man’s sperm may look fine, may swim fine, but if they can’t fertilize the egg, sending that couple to repeated cycles of intrauterine insemination is...doomed to fail.

Q: One of your posters details findings that normal ejaculates as defined by the World Health Organization can have abnormal “capacitation.” Could you define capacitation and how a focus on this function addresses the shortcomings of the current definition and means of addressing male infertility?

Capacitation depends upon several things. The sperm has to be properly made in the testes; and when the sperm gets into the female reproductive tract, they have to be able to detect and respond to different stimuli. The current tests can tell us how many sperm are in a sample; whether they are swimming ok, whether they look ok.
But the Androvia Cap-Score Sperm Function Test will be the only [available] laboratory test that can help determine whether sperm capacitate and can actually fertilize an egg.

Q: You have shown that the Cap-Score greatly enhances the ability to identify cases of idiopathic infertility. Could you describe some of the evidence that has emerged from the work using the Cap-Score, and highlight its clinical potential for addressing male infertility.

A: In one of the posters,2 we compare the Cap-Score results of samples from men who are having difficulty conceiving against the results from a large cohort of men who we know are fertile as their wives are pregnant or they just fathered a child.

Having data from this population of men who have a pregnant wife or who have fathered a child gives us a sense of what normal scores are for fertile men.

By looking at the Cap-Score results from men who are consulting a urologist for semen analysis because they are having difficulty conceiving, we found that a very high percentage of the men who question their own fertility do have reductions in sperm function. The Cap-Score test showed us that 40% or more of men [who are consulting a physician about their fertility] are coming in one or more standard deviations below the mean for the fertile men.

The Androvia Cap-Score Sperm Function Test is the only [available] laboratory test that can help determine whether sperm capacitate and can actually fertilize an egg.

Q: What do you think is the potential role for the Cap-Score in clinical settings where an assessment of male fertility is appropriate?

A: I think it will be a complement to current testing. The Cap-Score Sperm Function test will help to personalize assisted reproduction, in two ways. First, the Cap-Score will give medical professionals and couples the information they need to help them make informed decisions about the best approach for them to take regarding their fertility, whether it be attempting natural conception, IUI, classical IVF, or ICSI.

The second way this assay might help clinicians personalize assisted reproduction is through some research we’re doing on the timing of capacitation. The presentation that I just gave [at the American Society of Andrology meeting] included data from studies where we showed that the time of capacitation is reproducibly different for different men.3

In some men, repeated semen samples show that [their] sperm capacitate within a few hours. In other men, [capacitation] takes longer—up to 24 hours. This information could help to time insemination when performing IUI. Currently, insemination is done based on the predicted time a woman is ovulating. Information on the timing of capacitation will allow clinicians to factor in the time it is going to take for a particular man’s sperm to capacitate, so both the sperm and the egg are functional at the same time.

This is important because the peak fertilizing time is relatively short. When a woman ovulates, that egg can only be fertilized within a 12 to 24 hour window. Knowing how long it takes for a particular man’s sperm to capacitate will help make sure that the maximum number of sperm are ready to fertilize at that time, too. This kind of personalized medicine approach will allow the clinician to optimize this technique for each particular couple.

We think there are two ways the Cap-Score can potentially be used to personalize assisted reproduction. The first pertains to choosing whether a couple is a good candidate for IUI or whether they should go straight to ICSI. We are very confident about this part and have a lot of data. We are still conducting research on the timing of capacitation in the Androvia lab.

Q: What lines of inquiry are you investigating to build upon these findings?

The timing of capacitation is research in the pipeline. Hopefully, if that research goes well, we’ll be able to provide information that can help clinicians determine not only which form of assisted reproduction to use, but also tailor how they perform that technique to maximize the chance of success for that individual couple.

At this time, the data demonstrate that the Cap-Score Sperm Function Test will allow us to provide objective information to help clinicians who are trying to treat couples having trouble conceiving, and counsel these patients toward the most appropriate form of reproduction that’s right for them. We’re very excited to see this put into practice. 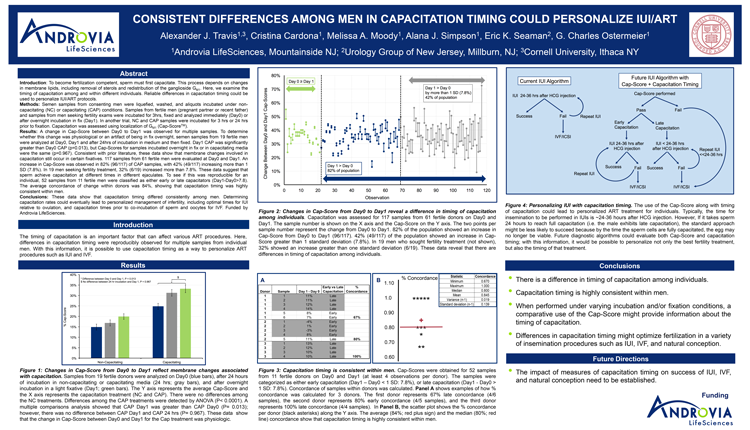