This website uses cookies to ensure you get the best experience on our website. Privacy Policy
Erectile dysfunction (ED) is strongly associated with aging, smoking, obesity, hypertension, diabetes mellitus (DM), chronic kidney disease (CKD), mental status, and a history of cardiovascular disease (CVD). Gut microbiome is considered to be a crucial factor in human health and disease. Many researchers have investigated gut microbiome in various disorders, such as aging, hypertension, CVD, mental status, CKD, and DM. It is known that some bacterial genera which produce beneficial substances for human health decrease and others which are related to pathogens for human being increase in various diseases. We hypothesized that men with ED might have a decrease in some beneficial genera or an increase of some harmful genera. In this study, we researched the relationship between ED and gut microbiome in a community-based population in Japan.

We cross-sectionally surveyed 196 age-matched men who participated in the Iwaki Health Promotion Project in 2015. The gut microbiome was assessed by tag sequencing of the 16S rRNA gene extracted from fecal samples. Erectile function was evaluated with the five-item International Index of Erectile Function (IIEF-5), and the men were divided into two groups: low-IIEF-5 (≤16; n = 92) and high-IIEF-5 (>16; n = 92). No significant difference was seen in age, history of hypertension, DM, CKD, and CVD between the two groups. However, the relative abundance of Alistipes was significantly lower and Clostridium XVIII was significantly higher in the low-IIEF-5 group (Figure1). Multivariate analysis showed that low-IIEF-5 was significantly associated with moderate-to-severe lower urinary tract symptoms, an abundance of Alistipes and Clostridium XVIII.
Alistipes is a culturable bacteria and believed to produce sulfonolipid. Sulfonolipids are known for acting as an antagonist on the von Willebrand factor receptor and suppressing tumor necrosis factor-alpha (TNF-a). These substances are related with micro-inflammation and vascular endothelial dysfunction. Previous studies have demonstrated that the severity of ED was inversely correlated with von Willebrand factor and TNF-a. Further research has demonstrated that CVD patients have a lower abundance of Alistipes and a higher level of TNF-a. A longitudinal study in Europe revealed that men with an IIEF-5 <16 had a notable risk of CVD event than those with IIEF-5 ≥16. Because ED may be an early phase of generalized vascular disease and be an independent risk for CVD, we speculated that a lower abundance of Alistipes in men with ED may be associated with the risk of future CVD. 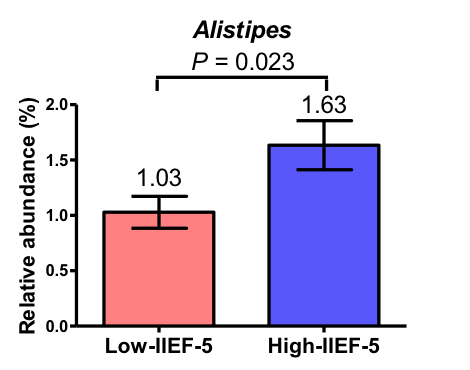 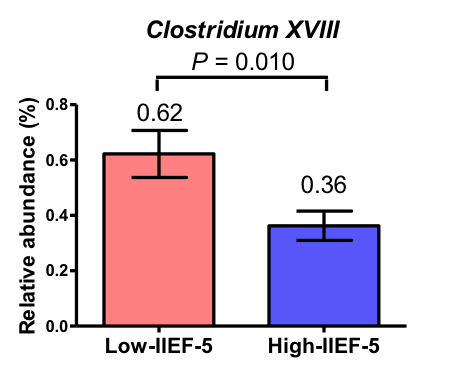 We did find that some genera were significantly decreased or increased in the low-IIEF-5 group. However, we could not find an obvious altered microbiota structure in ED. Further research is necessary to elucidate the relationship between ED and gut microbiome.