This website uses cookies to ensure you get the best experience on our website. Privacy Policy
The Vescica Ileale Padovana (VIP) was described first in 1989 as a technique for total bladder replacement by mixing principles from the Camey reservoir, the clam cystoplasty, and the Kock pouch. It represents the second most commonly performed neo-bladder in Italy and it has gained popularity also in Poland, Spain and elsewhere due to its simplicity, technical advantages and functional outcomes.

Intra-corporeal, extra-corporeal and hybrid techniques of UD after RARC have been reported for both continent and incontinent diversion. Despite the rise of robotic assisted radical cystectomy from 0.6% in 2004 to 31.3% in 2017, only few centers perform intra-corporeal orthotopic neo-bladder (ICONB).

In order to minimize complication in the development of a new surgical technique in the safest way for patients, the Ballion Collaboration recommend to follow the Idea, Development, Exploration, Assessment and long term follow up (IDEAL) guidelines. The IDEAL Framework describes the stages through which interventional therapy innovation normally passes, the characteristics of each stage and the study design types which we have recommended for each.

The IDEAL stages are the following: (Phase 1) Idea, (Phase 2a) Development, (Phase 2b) Exploration, (Phase 3) Assessment and (Phase 4) long term follow up.

IDEA (Phase 1): our study is based on specific historical references. The idea was to describe a new intracorporeal technique that replicates the open surgical principles. All the surgical steps were first evaluated and subsequently tested in a dry lab model.

The creation of the phantom model represents an important phase of IDEAL guidelines. In order to test the new intracorporeal surgical technique, a phantom model and Porcine model have been developed.

For the phantom model, we used a “tourniquet” to simulate the urethral stamp and a 40cmx 6 cm strip of Newnik Cozymat Reusable Absorbent Sheets / Under Pads- Peach is a comfortable fabric mat with an extra dry layer to prevent bed wetting. It simulates properly the ileum: the cover outside is smooth and waterproof and simulates the ileal serosa, while the roughly and absorbent surface simulates the ileal mucosa. After selecting 40 cm x6 cm strips, we immersed it in a solution of Braunol and Ultrasound Gel in order to obtain a texture similar to the ileum. Three sponges were assembled in order to simulate the pelvic floor. We used the Da Vinci Si® System (Intuitive, CA), one needle drivers EndoWrist®, one scissor EndoWrist®, one Prograsp EndoWrist®, 0° lens camera, and Vicryl synthetic absorbable sterile surgical suture monofilament, with 5/8 needle size 3-0 sutures.  To perform the watertight test a 150 ml syringe and saline solution mixed with Ultrasound Gel and methylene blue dye was used.

All the surgical steps were tested during 12 procedures. VIEW a time-lapse video.  Moreover, the neo-bladder was tested using a live porcine model by an expert robotic surgeon. 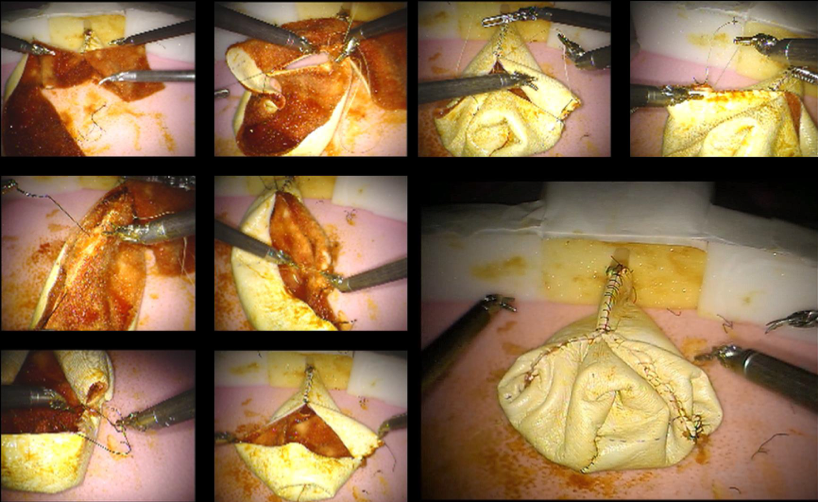 DEVELOPMENT (Phase 2a). Once the steps of the technique were standardized, we performed the first cases, focusing on technical details.

EXPLORATION (Phase 2b). We performed the technique in the consecutive series, focusing on adverse effects and potential benefits.

In the described technique, replicating the open technique, staplers are avoided, and every suture is accomplished with re-absorbable sutures (barbed or non-barbed). Specific tricks were developed in order to facilitate suturing by means of stay sutures putting in axis and tension the segment to be sutured. 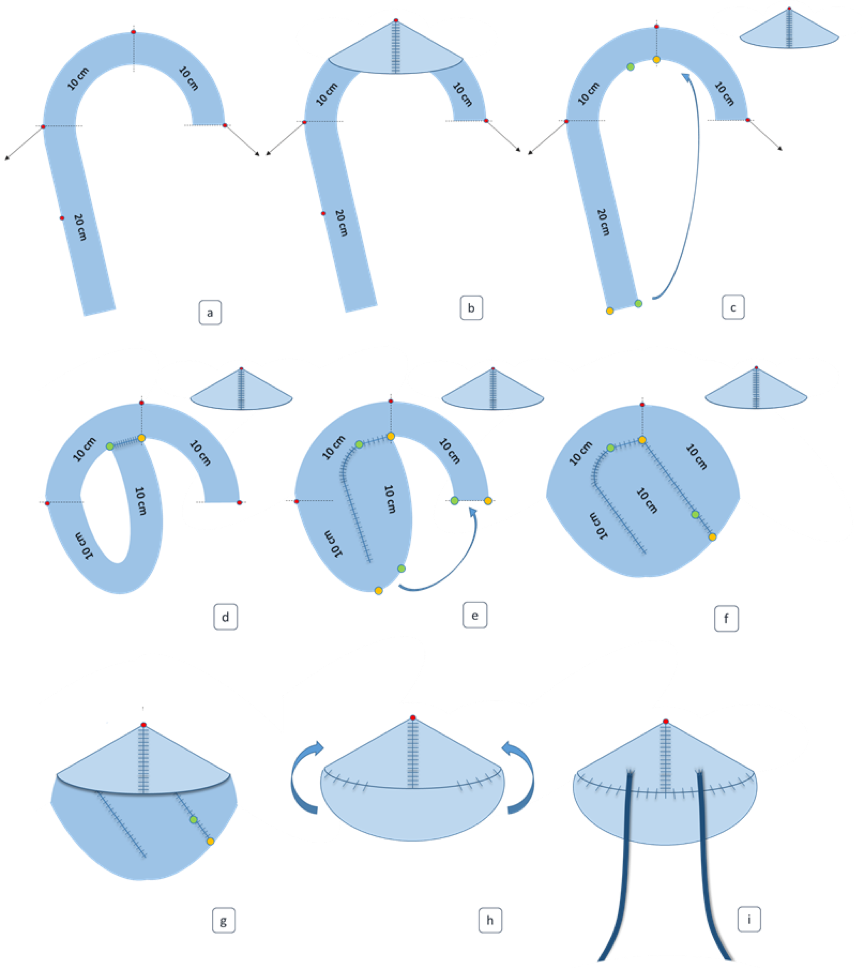 Figure 2. After ileal loop isolation, e positioning the reconstructive part takes place as follow.  A 10-cm antimesenteric opening of the distal ileal segment is performed and a 5 cm distal funnel is created. The ileal orifice is created at the inferior apex of the funnel and the UIA is performed. The ileal segment is totally open on the antimesenteric border to obtain full detubularization. The posterior plate configuration is carried out folding medially in a “U-shape” the proximal ileal loop. To perform the anterior plate, the superior margin of the posterior plate is folded up-down with a first stitch in the middle to the anterior wall of the distal funnel. The right and left ureter are generously spatulated and then separately anastomosed directly to the lateral horns of the reservoir, previous ureteral catheters positioning. A watertight-test is performed with 150ml of saline solution. Ureteral stents are brought outside the abdominal wall through a single small incision. A drain is placed in front of the reservoir. A detailed description of the aforementioned steps is reported in figures legend.

In addition to the magnification, 3D visualization and endowristed manipulation allowed by the robotic technology, the benefits of our technique are the following. When compared to the other techniques described, we use a shorter ileal segment (40 cm vs 55-65 cm). This consents to reduce the absorption surface and leads to a lesser post-voiding residual. The principles of detubularization and a double-folding reconfiguration are followed in order to create a low-pressure good capacity and compliance reservoir. The “cardioid” shape of VIP is similar to the natural bladder allowing to fit perfectly in the small pelvis becoming a real orthotopic neobladder. The lower funnel directs the voiding pressure towards the urethral conduit during the abdominal straining. The anastomotic hole at the very end of the anterior suture constructing the lower funnel allows a perfect ileal-urethral anastomosis, without tension and with well-vascularized ileal wall. Moreover, maintaining the left ureter in its anatomic native position, without the need of crossing from left to right side, the risk of stricture, due to the left ureter isolation and devascularization is at least theoretically decreased.