It was October 20, 2010, when the U.S. Food and Drug Administration asked manufacturers to add new warnings to labeling of gonadotropin-releasing hormone (GnRH) agonists, a class of drugs primarily used to treat men with prostate cancer.  The warnings alert patients and their health care professionals to the potential risk of heart disease and diabetes in men treated with these medications.


An analysis demonstrated that patients receiving GnRH agonists were at a small increased risk for diabetes, heart attack, stroke, and sudden death. The new labels included this update in the Warnings and Precautions section about these potential risks. Since this time urologists, medical oncologists and cardiologists have been assessing the effects of androgen deprivation therapy (ADT). The ongoing inquiry seeks to clarify if the type of medication and patient characteristics, such as age and comorbidities, impact cardiovascular disease (CVD) risk associated with ADT? And further how to assess the increased cardiovascular risk associated with current agonist or antagonists GnRH medications?

Studies over the past few years have been published which demonstrate that prostate cancer patients’ comorbidities can impact. So it’s important for urologists to consider these factors when treating men with advanced prostate cancer using ADT.

To gain an in-depth perspective on the CVD risks associated with ADT use, and how to best use these therapies in treating advanced prostate cancer, Everyday Urology™, interviewed expert Thomas Keane MD, professor and chairman of urology at the Medical University of South Carolina.

“We should not use a ‘one size fits all’ approach when using ADT. Different options should be made available and fully discussed with advance prostate cancer patients, and we should individualize our treatment choices,” Dr. Keane said.

Dr. Keane noted that the first data on CVD risks associated with hormonal therapies in prostate cancer was published in 1967 by the Veteran’s Administration.1 Estrogens had proven to be effective for reducing prostate-cancer related deaths in patients with advanced hormone sensitive disease but using oestrogens also caused an increased incidence of deaths from cardiovascular disease. “Not only were patients dying from myocardial infarction, but also pulmonary emboli,” Dr. Keane said.

Use of ADT using LHRH agonists (or GnRH agonists) for prostate cancer has been a step forward for effectively treating advanced prostate cancer, but there are still significant cardiovascular morbidities and mortality associated with these medications. In 2015, for instance, a population-based study showed that among 9,596 patients from the Surveillance, Epidemiology and End Results (SEER) Medicare database, treated from 1991 to 2009 with ADT (LHRH agonists), the 5-year mortality from CVD was 9.8% and among those with pre-existing CVD, the mortality was even higher—14.8%.2 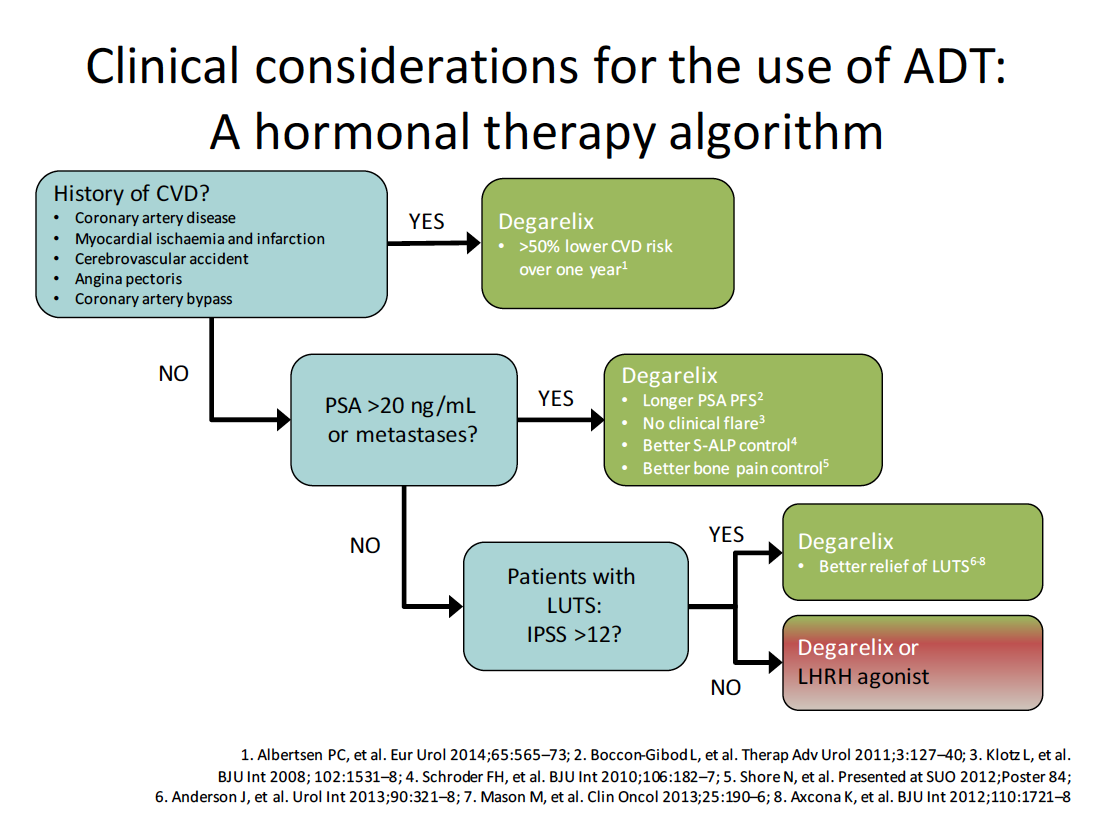 The CS21and CS21A phase III trials however, showed that the ADT alternative, the GnRH antagonist, degarelix—was at least as effective as GnRH agonists with less cardiovascular disease complications. The results from the CS21 trial showed that degarelix, when compared to the GnRH agonist leuprolide, offered faster testosterone suppression and PSA reduction and similar incidence of acute adverse events at 1 year. It also showed a lower rate of PSA failure in favor of degarelix but this was a secondary endpoint and the design of the trial was for non-inferiority On the basis of these results, the FDA approved degarelix in 2008. A later analysis of the CS21 trial data also showed that ischemic heart disease—the most frequent cardiac disorder in the trial—occurred in 4% of degarelix patients vs. 10% of leuprolide patients. Myocardial ischemia, myocardial infarction, and cardiac failure each occurred in less than 1% of those on degarelix vs. 2% of leuprolide patients.3 CS21A data also revealed that degarelix offered improved disease control and superior PSA progression-free survival when compared with leuprolide.

Knowing which patients are most likely to suffer adverse cardiovascular effects from ADT therapy is one part of helping patients choose the best type of therapy for their advanced prostate cancer, Dr. Keane says. Results from a pooled analysis of six different randomized phase IIII and IIIB trials of degarelix or GnRH agonists has also offered specific guidance on the cardiovascular morbidities and mortality seen with these two types of ADT.

“This analysis was very significant, because it gave us a lot of data—not just on the morbidity associated with degarelix vs. GnRH agonists—but also on the relationship between ADT and pre-existing cardiovascular disease,” Dr. Keane said. While a randomized trial would be best, in the absence of such, this data is the best we currently have

In the study, published in European Urology, in 2014, cardiovascular risks, cardiovascular events and deaths from cardiovascular disease were assessed over 1 year following initiation of ADT therapy.6 Men with certain risk factors for cardiac disease—such as a prolonged baseline QT, a corrected QT interval, hypokalemia, or a family history of long QT syndrome were excluded from the analysis. Cardiovascular events were defined as arterial embolic or thrombotic event, hemorrhagic or ischemic stroke, myocardial infarction and other ischemic heart disease.

A Swedish study also shed light on the timing of cardiovascular disease after the administration of ADT.7 In a study of 10,656 men on antiandrogens, 26,959 on GnRH agonists, and 3,747 who underwent surgical orchiectomy for prostate cancer, men with prostate cancer on GnRH agonists were at greater risk for a cardiovascular disease event than those who underwent orchiectomy 2 years after initiating ADT or surgery. Men who had experienced CVD events prior to surgery or ADT were at the greatest increased risk for cardiovascular events.

Yet time on ADT also had an impact on CVD risk in the study. Among men on ADT, CVD peaked sharply during the first year after initiation of therapy as well as for those who underwent surgical orchiectomy. “These observations imply that the majority of cardiovascular events occur shortly after the start of ADT, potentially because of an acute direct drug effect…” the researchers wrote in their study. The observation that cardiovascular events seem to peak right after the start of ADT has implications for clinical practice—and may affect the use of neoadjuvant and adjuvant ADT as well as palliative ADT, the researchers concluded.

As an increasing amount of research has provided details about the increased risk of CVD with ADT, studies have also delved into the possible mechanisms of this increased risk, according to Dr. Keane. Most acute CVD events are caused by rupture of a vulnerable atherosclerotic plaque. “The most vulnerable plaque is one with a thin cap and one that is rich in inflammatory cells and rich in lipids,” Dr. Keane said. GnRH agonists and antagonists have different biological effects on T cells—which express GnRH receptors—these differences could lead to a difference in cardiovascular disease risk, he added.

GnRH agonists cause T cells to increase activity and proliferation, and one result is fibrotic cap disruption and plaque instability. By contrast, GnRH antagonists cause a complete blockade at the T-cell GnRH receptors with no signal transduction. As a result, stimulated responses are inhibited—potentially leading to less fibrotic cap disruption and plaque instability, according to Dr. Keane.

Since the increased CV risk from ADT therapy is so pronounced among men with pre-existing cardiovascular disease, recent laboratory and animal studies have also investigated the effects of different types of ADT therapy on established plaques. In one study in ApoE-/- mice, researchers looked at the effects of GnRH agonists and antagonists on advanced and stable plaques in the carotid artery.8

After 4 weeks of ADT, increased areas of necrosis were found in stable plaques from leuprolide-treated mice when compared to degarelix-treated mice or controls (11% vs. .2% vs. .6%). “Necrosis destabilizes plaques and increases the risk for rupture and development of acute cardiovascular events,” the researchers wrote in their paper. Plaques from mice treated with leuprolide also showed evidence of increased inflammation as evaluated by macrophage immunohistochemistry, but there was no evidence of inflammation in plaques from degarelix-treated or control mice.

In addition to delving into the mechanisms that underlie the CVD risk seen with ADT therapy, recent studies have also pointed out that assessment for previous cardiovascular disease is vitally important in selecting patients for ADT therapy. A recent study in British Columbia, Canada, for instance, found that among 100 consecutive men with intermediate- or high-risk localized prostate cancer referred to the British Columbia Cancer Agency for ADT therapy, 25% had established cardiovascular disease.

Even among those without established cardiovascular disease, the risk for CV event was increased. This finding could be explained by the fact that Framingham risk scores that were high in 65% of patients in the study, intermediate in 33% of patients and low in just 1% of patients. Comorbidities that could affect CVD risk were also increased in the study population with hypertension present in 58% patients, dyslipidemia in 51% and impaired glucose tolerance or diabetes in 24%. Yet very few patients in the study had undergone any kind of testing for cardiac disease.

This kind of pre-existing cardiovascular disease points out the need for multidisciplinary care—including testing from cardiologists for patient who merit it—as well as improved patient selection for ADT therapies, according to Dr. Keane and recent research studies.

In one study presented at the 2015 ASCO Genitourinary Cancers Symposium, a large multiyear retrospective analysis of German health insurance data showed that men with prostate cancer treated with ADT—particularly GnRH agonists— had an increased occurrence of serious cardiovascular events as well as relevant baseline cardiovascular diseases.10 In the study, the investigators identified 44,166 men with prostate cancer of whom 10,611 were treated with ADT. The majority, or 10,554 men, received a GnRH agonist, while the rest received a GnRH antagonist. Among those who received any kind of ADT, 7.8% experienced acute coronary syndrome or ischemic stroke vs. 5.9% of those who did not receive these medications. In the small group of patients receiving a GnRH antagonist, degarelix, the cardiovascular event rate was low at 2.3%--and all events occurred among men with a high-risk profile.

The investigators also identified an increased prevalence of baseline diabetes, coronary artery disease and heart failure among the ADT-treated patients vs. a non-prostate cancer reference group. Because of the frequent comorbid cardiovascular risk factors, another study by the same research group looked at coordination of care among treating specialists. Although they found that in German clinical settings, urologists are “important partners in the detection and observation of cardiovascular morbidity,” vigilance from cardiologists was far from ideal. The rate of concomitant cardiology treatment of ADT patients was just 28.8%, according to the study.10

While degarelix is not yet considered a standard of care for ADT treatment in advanced prostate cancer, it can be the best choice for men with pre-existing cardiovascular disease or risk factors for CVD. Likewise, patients with higher PSAs and more advanced disease will get the maximum benefit from degarelix due to this medication’s superior effects on PSA progression, Dr. Keane said.

The GnRH agonists, however, offer improved convenience since they can be given at 3, 6 or 12 months, and the GnRH antagonists requires a monthly 28-day dosing regimen. “For patients who want that convenience, or who are unable to visit a physician very often, the GnRH agonists can be a good choice—if they also have no history of CVD and small volume metastatic disease,” Dr. Keane added. Finally, the appropriate way to resolve the remaining questions is conducting a prospective randomized controlled clinical trial and just such a trial is currently accruing.  This is a Trial Comparing Cardiovascular Safety of Degarelix Versus Leuprolide in Patients With Advanced Prostate Cancer and Cardiovascular Disease (PRONOUNCE).

Meanwhile as we await results on this study, we have guidance from the other analysis to guide us in daily clinical practice decisions.