(UroToday.com) The Society of Urologic Oncology (SUO) held a virtual meeting on Saturday, July 18, 2020 in place of the usual meeting held at the American Urological Association annual meeting. This virtual meeting was divided into sessions on bladder cancer, kidney cancer, and prostate cancer. In the session on prostate cancer, Laurence Klotz, MD, FRCSC, discussed the role of focal therapy for prostate cancer, highlighting both its role (the use) and potential pitfalls (the misuses).

Dr. Klotz began by highlighting a nearly exhaustive list of considerations on both side of the pro/con debate for focal therapy, as summarized in the following table:

Notably, a profusion of technical approaches/methods is both a potential pro and con to focal therapy as this variety allows for potential personalization of care to optimize patient outcomes but at the cost of potential variability/heterogeneity and lack of reliability.

Dr. Klotz highlighted that 20 years ago, breast cancer treatment was characterized by radical surgery with mastectomy which was disfiguring. Subsequently, the paradigm has markedly changed to involve lumpectomy (with adjuvant radiotherapy) that preserves much of the normal anatomy and function while treating the tumor. 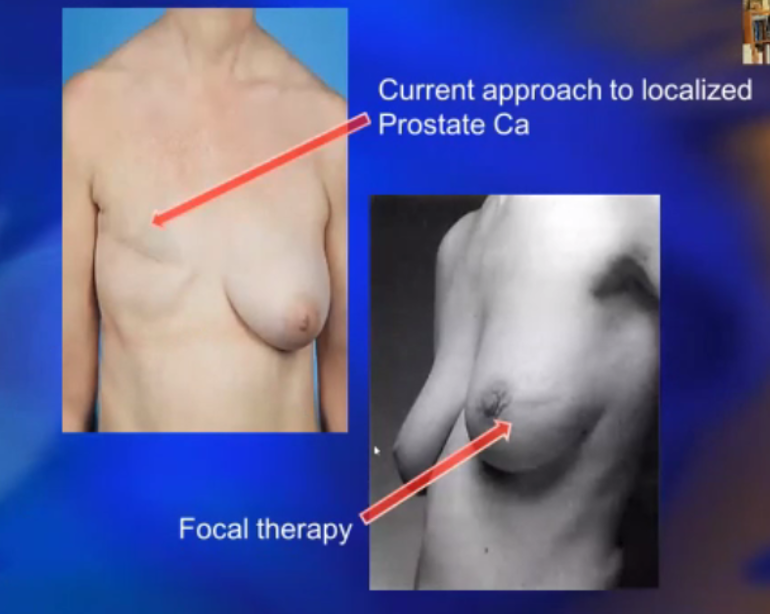 The rationale for a less radical treatment approach comes from an understanding of the natural history of prostate cancer, particularly of GG2 disease. While there have been changes in disease characteristics over time (due to the Will-Rogers phenomenon and other factors), the SPCG-4 trial demonstrated no mortality benefit for radical prostatectomy compared to watchful waiting for patients with GS3+4 disease, despite significant benefits for patients with higher grade disease.

Within this context of relatively limited potential for oncologic benefit of radical therapy, Dr. Klotz moved on to an assessment of the functional outcomes for patients treated with focal therapy. To date, these data come from a variety of small cohorts. However, erectile dysfunction rates have been reported to range from 0 to less than 40%, incontinence in 0 to 12% and relatively rare retention and hematuria events. While there are limitations to these data, the evidence is clear that functional outcomes are better following focal therapy compared to radical treatment.

Moving forward, Dr. Klotz discussed the oncologic outcomes of ablation. These vary somewhat based on treatment approach, PSA reductions are significant, typically in the range of 80-95%. Positive biopsy rates are somewhat variable, between 9 and 35%. Dr. Klotz suggested that, depending on one’s perspective, these data could be viewed through a “glass half empty” or “glass half full” approach.

He then highlighted data from Tourinho-Barboas and colleagues examining outcomes following focal therapy with HIFU or cryotherapy in which a significant proportion of patients remained free of further oncologic treatments with 8-year follow-up. 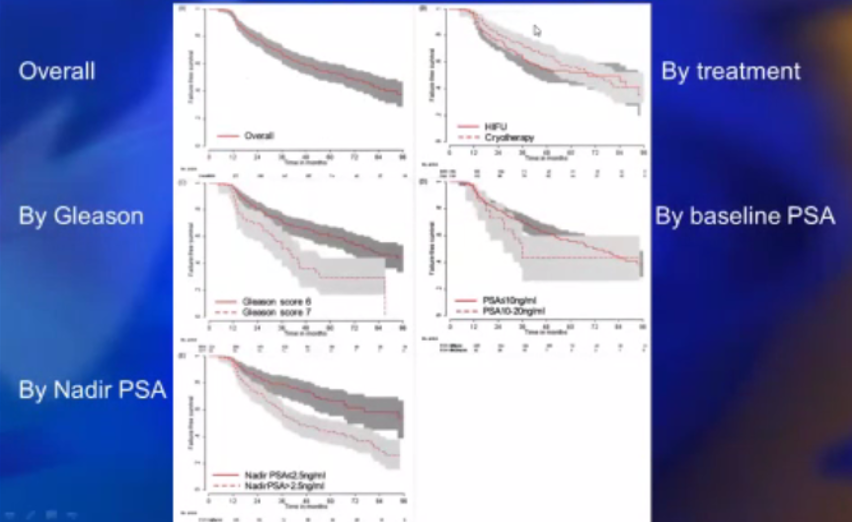 Given the known positive functional outcomes, these patients will have a very positive outcome.

Moving from these potential strengths of a focal therapy based approach, Dr. Klotz considered a number of potential caveats.

First, for patients with clinically insignificant disease, active surveillance is most appropriate. Thus, use of focal therapy in this patient population is potentially, in his words, “snake-oil medicine”. Further, for patients with more aggressive histology, use of focal therapy may provide false reassurance following essentially ineffective therapy. Both of these issues relate to patient selection.

Second, there are further concerns regarding tissue reaction to focal therapy. The concept of accelerated repopulation is well recognized when patients undergo inadequate radiotherapy with double stranded DNA breaks leading to genomic instability and tumor induction instead of cell death. Dr. Klotz hypothesized that a sublethal energy dose from focal therapy may lead to a tissue injury response with cytokine and growth factor release leading to tumor induction. It’s important to note that this is, to date, a hypothetical concern with no data to either support or refute it.

Third, as highlighted in the previous discussion of oncologic outcomes, salvage therapy is not infrequently required. When necessary, salvage radical prostatectomy is associated with significantly worse functional and oncologic outcomes compared to upfront surgery, although there is the inevitable selection bias of patients who have more adverse features among those who recur and require salvage therapy. 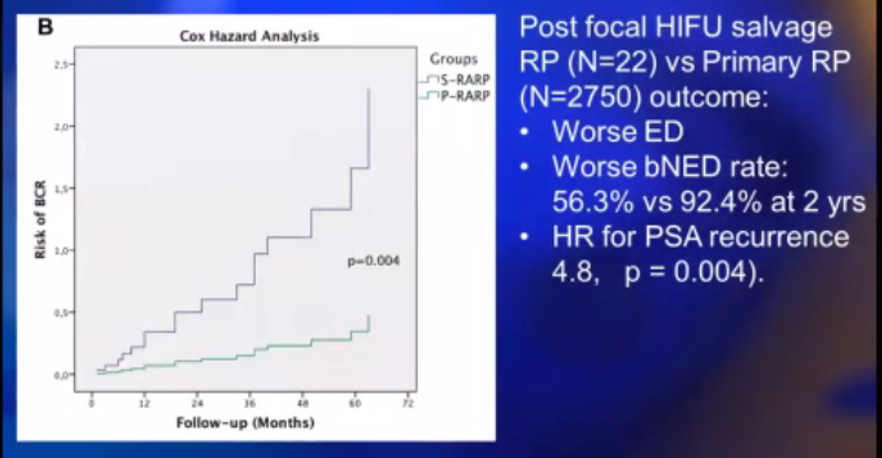 Fourth, focal therapy depends on MRI for tumor localization, patient selection, and response assessment. However, as highlighted previously by Drs. Schade and Hu, there are significant limitations to MRI. Notably, small tumors (<10mm) and secondary (non-index) tumors are often missed on initial MRI. To supplement MRI, Dr. Klotz sees a major role for biomarkers, particular in post-treatment monitoring. Citing a hypothetical biomarker of clinically significant disease, if such a marker was positive prior to treatment and converted to negative following treatment, it could be used for ongoing monitoring with a reversion to positive marker assays triggering further investigation. Such an approach, deemed dynamic risk profiling, has been examined in hematologic malignancies. 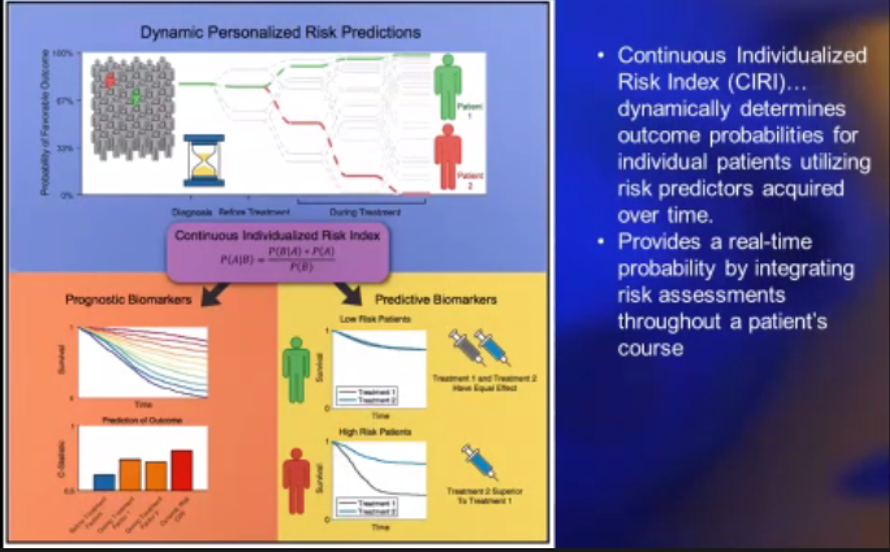 Considering the future of focal therapy, Dr. Klotz highlighted limitations in generating data to support such an approach. Unlike pharmaceutical trials that represent quantum changes, the benefits of new technologies and approaches tend to be gradual and incremental. Further, there are important confounders including the learning curve/experience, technical skill, and site-to-site variation. As a result, it often requires very large trials with long follow-up to demonstrate relatively small differences. This renders these trials often unfeasible. Dr. Klotz highlighted the case of robotic-assisted surgery using the Da Vinci robotic platform as an example of these barriers to interventional trials. The U.S. Federal Drug Administration (FDA) has acknowledged these issues in their approvals, to date, for HIFU, High-Intensity Focused Ultrasound (HIFU), and TULSA, transurethral ultrasound ablation (TULSA), (TULSA-PRO®) for prostate tissue ablation. However, there remains an ongoing need for robust and clinically relevant endpoints for focal therapy trials.

Guiding our treatment choices, Dr. Klotz laid out his view of the appropriate indications for focal therapy.

First, the ideal candidates for focal therapy, in his view, are those with GG2 disease in a targeted biopsy of a solitary unilateral, MRI-visible lesion with systematic biopsies showing no disease or only lower volume, GG1 disease.

Also reasonable, but less ideal, candidates including the following:

Finally, Dr. Klotz would not recommend focal therapy in the following circumstances, acknowledging that others may: