(UroToday.com) The poster session focusing on Bladder and Kidney cancer was held at the Annual Meeting of the Society of Urologic Oncology. In this session, Dr. Phillip M. Pierorazio presented long-term outcomes for patients treated with UGN-101 for low-grade upper tract urothelial carcinoma (UTUC).

UGN-101 is a mitomycin-containing reverse thermal gel. This novel delivery system allows for the topical treatment of upper tract urothelial cancer (UTUC), addressing issues associated with dwell time for standard topical treatments in liquid formulation. UGN-101 provides a kidney-sparing alternative for patients with low grade, non-invasive tumors or in patients whose renal function would be severely compromised after nephroureterectomy. UGN-101 was approved on the basis of the final results of the phase 3 OLYMPUS trial. As of this report, 23 of 41 (56%) patients who achieved CR following induction treatment with UGN-101 remained in CR at the end of OLYMPUS as of 12 months following the initial complete response. For interested and eligible patients, an ongoing, non-interventional, rollover study followed OLYMPUS to obtain long-term follow-up data which are reported by Dr. Pierorazio today.

All patients who completed OLYMPUS are eligible to participate in this rollover study. While not protocolized, involved physicians provide updates on disease status biannually as patients continue standard of care surveillance and treatment. 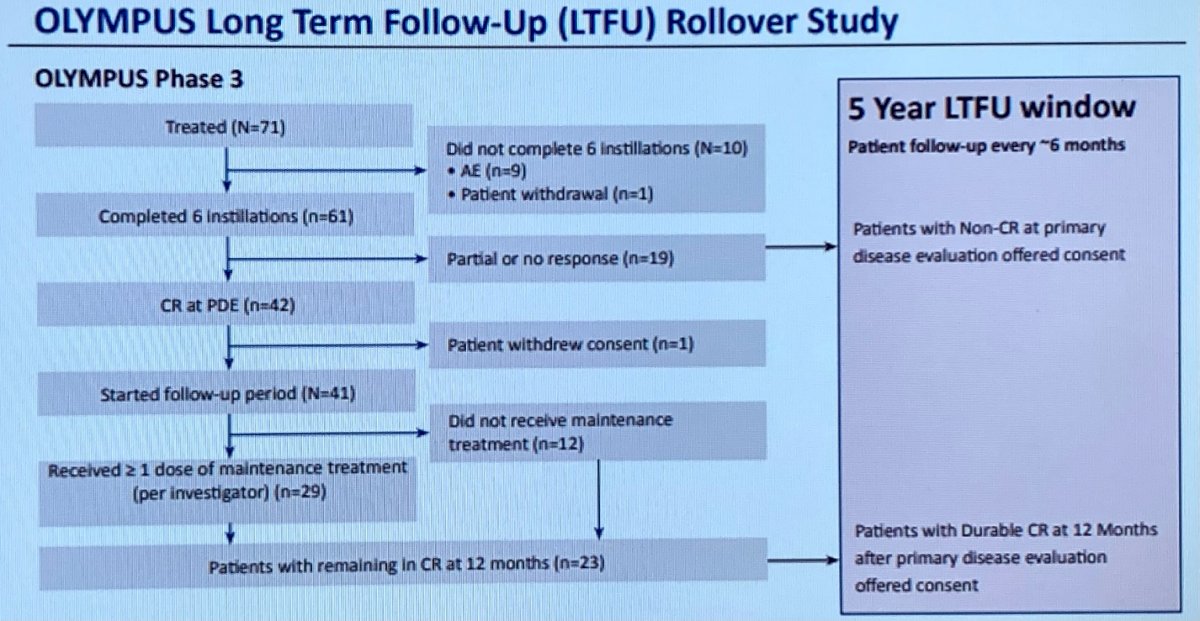 The authors are assessing duration of response (DOR) in patients who remained in complete response (CR) at the end of OLYMPUS, events of disease recurrence and progression, post-study treatments, and death as outcomes of interest. DOR is calculated as the time from first documented CR in OLYMPUS to disease recurrence or death or last adequate disease assessment (for patients who remained in CR).

As of a data cut off date of February 25, 2022, 16 of the 23 patients who achieved durable CRs at 12-months during the OLYMPUS protocol provided ongoing follow-up data. Among these individuals, the median (range) DOR among the 16 patients was 28.9 months (14.6 to 47.6 months). Among the 16 patients with a CR maintained until 12 months, 13 (81%) remained with a complete response, 2 (13%) had an ipsilateral recurrence of low-grade disease, and 1 patient (6%) underwent radical nephroureterectomy (RNU) due to ureteral stricture without evidence of UTUC at the time of surgery. Both patients with disease recurrence underwent endoscopic ablation.

Importantly, no patients had progression to high grade UTUC. One patient died during follow-up but remained in CR at the last evaluation prior to death.

Additional follow-up data were also available for 4 patients who were non-CR at the end of OLYMPUS. Since the end of the trial, 1 of these patients underwent endoscopic ablation for recurrent disease in the kidney treated during the study and 1 patient underwent RNU due to recurrent UTUC.

Thus, the authors concluded that these data demonstrate the robust durability of complete responses in patients treated with UGN-101. Importantly, none of these patients had evidence of disease progression.