(UroToday.com) The Society of Urologic Oncology (SUO) annual winter meeting included the annual Huggins Medal Award lecture with the 2021 recipient being Dr. Curtis Pettaway from the MD Anderson Cancer Center. Dr. Pettaway completed his BA in 1978 at Millersville University (Millersville, PA) followed by his medical degree in 1983 at the Temple University School of Medicine. Subsequently, he moved to Texas, completing two years of surgical training at Parkland Memorial Hospital in Dallas, followed by a two-year postdoctoral research fellowship in Internal Medicine at the University of Texas Health Science Center in Dallas, followed by his Urology residency training (graduating in 1991) at the University of Texas Southwestern Medical School. He then did his urologic oncology fellowship (1991-1993) at the MD Anderson Cancer Center, where he has remained on staff ever since. Dr. Pettaway’s accomplishments are vast, as highlighted:

Dr. Pettaway started his presentation by thanking many of the people/mentors that came before him. First, Dr. R. Frank Jones was the first African American diplomate of the American Board of Urology (1936) at a time when Black Americans were denied training in most medical specialties. In 1947, Dr. Jones helped create a training program at Howard University (Freedmen’s Hospital). Subsequently, the R. Frank Jones Urological Society (RFJUS) was founded in 1965 with a mission to “support Black American urologists in their efforts to care for patients, as they exercise clinical excellence to achieve quality outcomes and reduce health care disparities for Black people with urologic conditions.” RFJUS also has subspecialty society membership in the National Medical Association and the American Urological Association.

Second, Dr. Isaac Powell is urologic oncologist and Professor of Urology at Wayne State University and the Karmanos Cancer Institute. He is also the AUA 2021 Presidential Citation winner for his outstanding contributions regarding the biology, genetics, and environmental impact of prostate cancer in African American men. For Dr. Pettaway, Dr. Powell was a mentor for studying the biologic basis for prostate cancer disparities, specifically as a co-investigator of an NCI funded African Hereditary Prostate Cancer Study and a CDC funded Prostate Outreach Project for community based education/early detection in the Houston area.

During the early years at the M.D. Anderson Cancer Center, Dr. Pettaway discussed the mentorship of Dr. Andrew von Eschenbach (chair of Urology at the time) who recruited Dr. Pettaway as a fellow in 1991. He then became a clinical mentor, hired him on as faculty after his fellowship, and has provided guidance, exposure, and opportunities. Another key member during his early days at M.D. Anderson was basic scientist Dr. Isaiah J. Fidler (chair of Cancer Biology at the time), who was an expert in cancer metastasis. Dr. Fidler set high expectations for Dr. Pettaway, helping him apply his principles of metastasis to prostate cancer.

The basis of the title of Dr. Pettaway’s talk, specifically ‘An “Overcoming” Journey’ is centered around his work in penile cancer and the dilemma of penile cancer being a rare disease with little funding for research. At the onset of Dr. Pettaway’s career, he sought to further understand the dilemma of managing regional lymph nodes in penile cancer, with a focus on strategies to decrease morbidity and increase survival. Early work from his group looked at the effect of primary tumor stage and risk of lymph node metastasis, identifying the importance of vascular invasion and differentiation for lymph node risk. This early work formed the basis for the TNM 7th and 8th editions for assessing inguinal lymph node metastasis risk as follows:

Dynamic sentinel node staging includes injecting technetium labeled sulfur colloid dye into the dermal lymphatics of the penis, which then spreads bilaterally to the inguinal lymph nodes. Intraoperatively, using the gamma probe, one is able to identify the sentinel lymph node, which is made easier to visualize during dissection if blue dye is used (blue-stained node). After removing the node, a final scan of the area with the gamma probe is performed to ensure there is no additional activity. Dr. Pettaway notes that since you are only taking out several nodes when performing dynamic sentinel node biopsy, the complication rates are low, at ~10% in the majority of series. At high-volume centers, the sensitivity for detecting lymph node metastases is >90%:

Dr. Pettaway prefers to do a superficial inguinal lymph node dissection, which involves removing the nodal tissue above fascia lata (midpoint of the sartorius and adductor longus muscles), and 2-3 cm above the inguinal ligament and apex of the femoral triangle, which identifies all “first echelon” lymph nodes. The benefit of this approach is that the saphenous vein and fascia lata are spared. It is important in this setting to perform frozen sections because if a superficial node is positive, one has to then perform a deep dissection. This is a very effective approach as Dr. Pettaway nodes that in patients with pN0 superficial nodes, he has never had an in-field recurrence.

Another effective approach is a fascial sparing complete inguinal lymph node dissection. This includes a superficial dissection but also includes nodes in the fossa ovalis (deep), which also spares the saphenous vein. Since you are getting those additional deeper nodes, there is no need to do frozen sections. In a series from China, Yao et al.1 performed 201 inguinal dissections with preservation of the fascia lata in 104 patients with clinical disease staged at ≤N2. A mean number of 12.5 nodes were removed per groin. One patient (1%) had a recurrence outside the borders of the fascia lata after 7 months of follow-up, and the 3-year disease-free survival rate was 92.1% (100% for pN0, 91.3% for pN1, 80% for pN2, and 33.3% for pN3 disease).

Dr. Pettway states that laparoscopic and robotic inguinal lymphadenectomies are becoming more popular. The early goals of these techniques were to establish feasibility and adequacy of node removal, whereas more current goals are to assess complication rates and disease control rates. In a study from Dr. Pettaway’s group from 2013,2 they evaluated 10 patients with T1-T3 penile squamous carcinoma and no palpable inguinal adenopathy using a robotic assisted approach. The primary endpoint for this study was adequacy of lymph node dissection. Among 19 evaluable groins, the median lymph node count was 9 (range 5-21), there was one conversion to open, and the complication rate was only 20%. There are three studies that have reported comparison of outcomes among patients undergoing robotic versus open inguinal lymphadenectomy:

For patients with clinically palpable lymph nodes, Dr. Pettaway states that these are the patients that have the potential to die of their disease. In a study from Dr. Pettaway’s group, 182 men underwent lymph node dissection for squamous cell carcinoma, with a median follow-up of 4.2 years.3 After lymph node dissection 34 men had regional recurrence, of which 24 developed isolated regional recurrences without distant metastasis. The median RFS was 5.7 months, and the 3-year RFS rate was 70%. The 3-year RFS for patients with cN0, cN1, cN2, and cN3 disease was 91.7%, 64.5%, 54.7%, and 38.3%, respectively. Additionally, for men with ≥3 involved nodes, the 3-year RFS was 17% vs 82.4% in men with <3 involved nodes.

In a phase II study, Pagliaro and colleagues4 assessed neoadjuvant chemotherapy with the objective of determining the response rate, time to progression (TTP), and overall survival (OS) among patients with bulky adenopathy. Among 30 patients with stage N2 or N3 (stage III or stage IV) penile cancer without distant metastases, 15 (50%) had an objective response and 22 (73.3%) subsequently underwent surgery. There were 9 patients (30%) alive and free of recurrence (median follow-up, 34 months; range, 14-59 months), and 2 patients died of other causes without recurrence. Improved TTP and OS were significantly associated with a response to chemotherapy (p < 0.001 and p = 0.001, respectively), absence of bilateral residual tumor (p = 0.002 and p = 0.017, respectively), and absence of extranodal extension (p = 0.001 and p = 0.004, respectively) or skin involvement (p = 0.009 and p = 0.012, respectively). The Kaplan-Meier curve for OS, stratified by response to chemotherapy, is as follows: 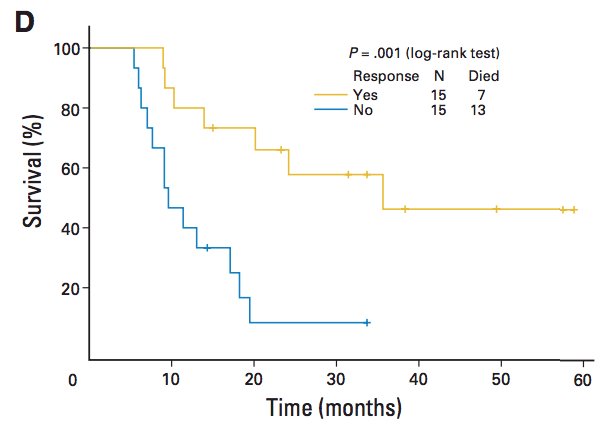 Given this lack of level 1 data, the International Penile Advanced Cancer Trial (InPACT) may provide stronger evidence for how we should integrate therapy for these patients. When the InPACT trial was designed in 2011, there were several important questions that were at the forefront of penile cancer management:

The InPACT trial design is as follows: 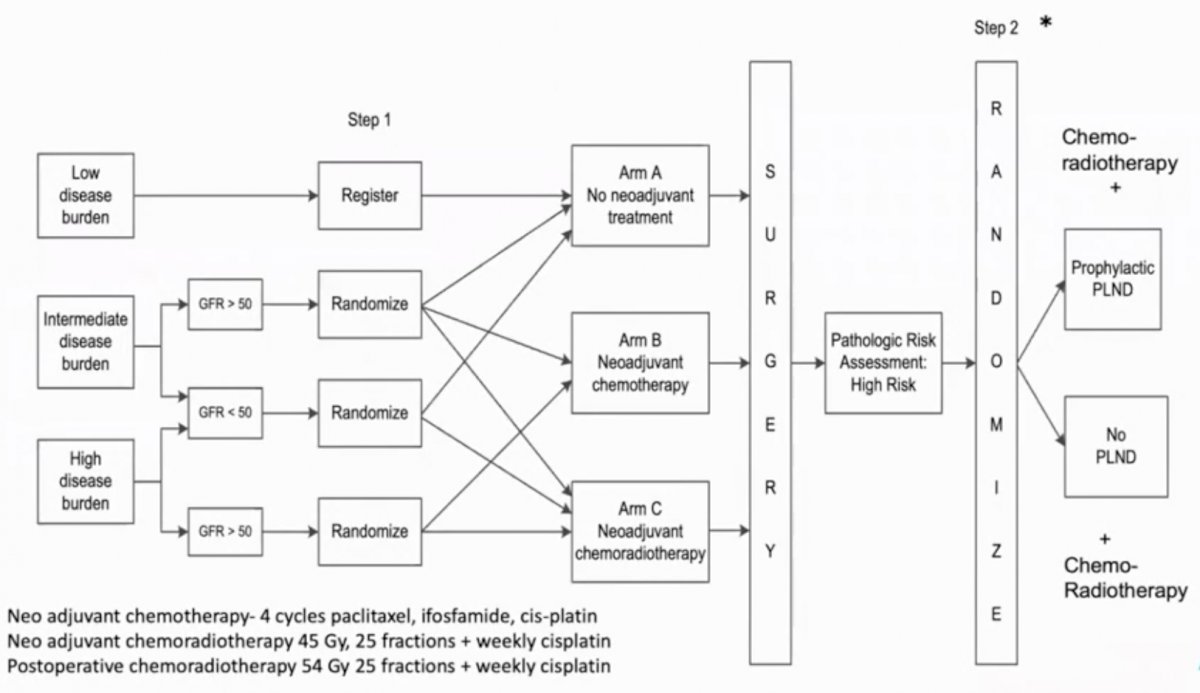 The InPACT trial is taking a Bayesian approach, with no formal hypothesis testing. This approach does allow for estimating the probability of choosing the better of two therapies in the intention to treat analysis. Overall, this methodology has been accepted for rare cancers. The primary endpoint for this trial is survival and secondary endpoints include DSS, DFS, DMFS, LRFS, pT0 rate, toxicity, surgical complications, and feasibility of delivering treatment on schedule. Dr. Pettaway notes that there have been challenges for InPACT, including six years to start the trial, identifying sites (15 sites in the US/Canada, 4 in the UK), credentialing (urologists, radiologists, radiation oncologists, and pathologists), BREXIT (no European site participation via the UK), and the COVID-19 pandemic. On a positive note, there are sites in Mexico and Columbia that have IRB approval, India (although there are administrative challenges), Australia, Ireland, and Italy (all assessing feasibility) will all hopefully be enrolling patients by 2022. The expected accrual for InPACT is 40 patients per year for 5 years, or 3-4 patients per month over 60 months; this also translates to 2 patients per site per year. As of November 2021, global accrual includes 68 participants:

Dr. Pettaway notes that the importance of the InPACT trial is a promise of:

Dr. Pettaway concluded his presentation of an overcoming journey in penile cancer with the following take-home messages: