(UroToday.com) In a state of the art lecture at the Society of Urologic Oncology Annual Meeting, Dr. Tracy Morris Downs discussed how we may move beyond ambition to organizational competency from a United States Health System perspective.

Dr. Downs began his talk by defining the relevant terminology:

Dr. Downs used the example of renal masses to highlight the difference between equitable and equal care.

Dr. Downs then added significant social history to each case, supporting in each circumstance initial treatment approaches. However, changing the clinical circumstances, we may consider different treatment approaches. For example, in the case of the 3.5cm renal mass which may be considered for partial nephrectomy, among an uninsured single mother, we may now prioritize an ablative approach which is associated with less employment interruption.

He further emphasized that the ongoing COVID-19 pandemic has unmasked and exaggerated many existing disparities. The pandemic has, disproportionately, affected communities of colour. However, many academic medical centers have taken this time as an opportunity to intentionally promote equity, including through clinical care, research, and education. Clearly, institutions range from just beginning this process to renewing an existing commitment. Citing the example of Alameda Health System in Oakland, California, Dr. Downs emphasized that health equity, diversity, and inclusion framework needs to consider workforce diversity and development, integrated community partnerships, inclusive leadership development, and equity of care.

Going back to 2003, Dr. Downs highlighted the “Missing Persons: Minorities in the Health Professions” report of Dr. Sullivan. This report highlights that, not only is there a lack of diversity in medicine, this lack of diversity affects much of the remainder of health care, including nursing and other professions. Dr. Downs highlighted that this paper was published in his first year as an attending surgeon. In the 18 years that have passed since that time, he emphasized that there has been little change and there remains a marked dearth of diversity in medicine and health care. Published recently, work from UCLA has shown that there is a particular lack of Black and Latinx physicians in urology. 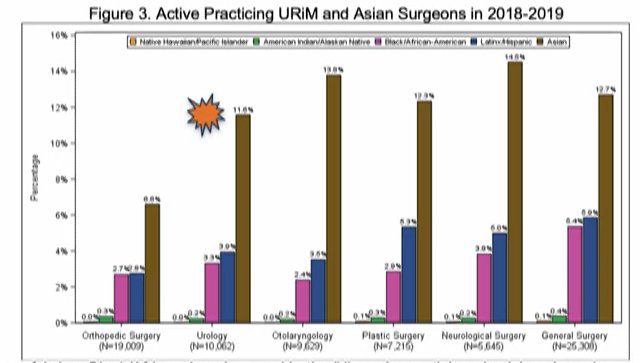 This model may apply not just to our specialty but to our society more broadly as we consider issues of equity, diversity, and inclusion. Dr. Downs suggested that, currently, our societies are predominately in the preparatory phase – that is, we need to make the leap to action.

Considering structural competence, Dr. Downs emphasized the importance of understanding how structures, both visible and invisible may lead to exclusion. To this end, he cited the example of Katherine Switzer who, in 1967, was attacked for running in the “men-only” Boston Marathon. Our institutions and profession, in a mirror to our society, can systematically exclude individuals and whole communities from rights, opportunities, and resources. The American Medical Association has documented important medico-historical events. While the first African American was admitted to a US medical society in 1854, black physicians were denied admission to the Medical Society of the District of Columbia between 1869-1870, an act that led the US Senate to find them guilty of race discrimination. The AUA was subsequently formed, initially as the New York Genito-Urinary Society, in 1902. At that time, Dr. Downs emphasized that this group was entirely male without representation of diverse populations.

Dr. Downs highlighted that subsequently in 1942, blood donated to the American Red Cross was racially segregated on the basis of orders from Maj. Gen. James Magee. In 1945, the American College of Surgeons refused membership to George D. Thorne on the basis that “fellowship in the college is not to be conferred on members of the Negro race at the present time”. Thus, he highlighted that that progress in medicine has been non-linear, with significant setbacks.

Jumping forward, in 2020, the AUA board of directors voted unanimously to create a Diversity and Inclusion, Task Force. Dr. Downs, chair of this task force, emphasized that it was intentionally over-represented with women as well as being inclusive of all specialties of urology. This group is working on five major focus areas: a just and inclusive environment; diversity in the workplace; structural competency; advocacy; and research.

Moving forward, Dr. Downs emphasized the development process that our organizations must proceed through towards an inclusive environment. These stages have their own natural order and progression which is required. To move forward, there needs to be a sustained effort. Further, he emphasized that organizations will tend to remain stagnant for as long as possible. Thus, a sustained effort is necessary to avoid losing the group. Organizations, once they reach a critical mass stage, require people to lead change within the organization (change agents). Thus, while changes do not require a majority, it does require a sufficiently committed core of individuals with the credible voice within the organization.

Quoting Mrs. Coretta Scott King, Dr. Downs stated “Struggle is a never-ending process. Freedom is never really won, you earn it and win it in every generation”. Alluding back to the historical context he gave before, Dr. Downs emphasized the tug-of-war between progress and regression.

In the context of the AUA and the SUO, Dr. Downs emphasized that while there is relative equality of men and women in the early career phases of science, technology, engineering, and mathematics fields, there is a decreasing representation of women in increasingly senior roles. Unfortunately, over time, has been little improvement. However, female mentors may act as a “social vaccine” to protect female students against negative stereotypes and provides or reinforces a sense of belonging. There are similar issues with a lack of representation of Black, Asian, and other racial minorities in chair positions in both basic science and clinical departments. Examining past presidents of the Society of Urologic Oncology, Dr. Downs highlighted the overwhelming representation of men, little different from the breakdown of the inaugural AUA in 1904. However, he emphasized the ongoing process of inclusive leadership development with an established structure, pipeline and training to support a more inclusive leadership within the organization.

Moving from our health care workforce to our patients, Dr. Downes emphasized that minority patients are underrepresented in four of five hospitals recognized in the U.S. News Best Hospitals. Thus, there persists segregation of care. When we consider contributors to health disparities, access to care and the quality of care are large contributors, along with health behaviours, social and economic factors, and the physical environment.

Highlighting data published by Dr. Kelvin Moses, Dr. Downs emphasized that African American and Hispanic patients were less likely to receive definitive therapy for prostate cancer, with a particularly large effect among those with clinically significant disease (Gleason 7 or 8-10). Looking beyond urologic oncology, he further emphasized disparities in outcomes for patients with COVID-19. At UVA, there has been a concerted effort to examine racially stratified outcomes, finding no differences.

Dr. Downs then discussed how we can move beyond good intentions and ambitions. Highlighting efforts at UVA, he emphasized the importance of including these priorities as part of the strategic plan, with objective diversity metrics and benchmarks. Further, there is concerted support for under-represented minority and female trainees to conferences that may provide particularly relevant support. To support these efforts, he highlighted the value of the Vizient Health Equity Strategy Alignment Tool to assess the ambition and readiness of an organization to take on efforts needed to improve diversity, equity, and inclusion across clinical, operational, and quality performance metrics.