(UroToday.com) Neoadjuvant chemotherapy (NAC) and radical cystectomy (RC) are standard of care for patients with muscle-invasive bladder cancer (MIBC). Despite level 1 evidence, and many guideline recommendations, supporting this approach, it is relatively underutilized in part due to the high patient burden from systemic toxicity and postoperative complications. Due to comorbidity or the toxicity of treatment, many patients are either ineligible or unwilling to receive this treatment approach. Further, there are concerns regarding delaying surgery, potential toxicity, and the inability to predict response and therefore know who will benefit. As a result, up to 60% of patients with MIBC may not receive definitive therapy for MIBC. However, an ability to identify patients who are more likely to respond to NAC would be helpful.

In bladder cancer, molecular subtyping has demonstrated prognostic importance and a suggestion that it may differentially identify patients who respond to NAC.

In a poster presentation at the Society of Urologic Oncology Annual Meeting, Dr. Magee and colleagues presented the results of their work examining the cost-effectiveness of molecular subtyping in the management of MIBC.

To do so, the authors developed a two-dimensional Markov microsimulation model using TreeAge Pro. They considered three different strategies: universal NAC usage, NAC at current usage rates, and molecular subtype-directed care. As there are a number of molecular subtyping classification schema available, the authors used the Seiler et al classification of subtyping, given that it had an operational commercially available testing platform. The primary outcomes were quality-adjusted life-years (QALYs), cost, and the incremental cost-effectiveness ratio (ICER). Secondarily, the authors considered quality-unadjusted overall survival. The base case was an adult patient with MIBC (cT2-4N0M0) who was appropriate for NAC and RC. 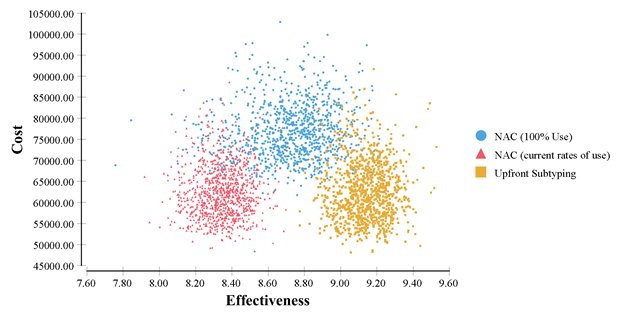 In terms of overall survival, this was maximized in either universal use of NAC or subtype-directed care, as shown in the following table.

The authors concluded that, while this model depends on the available literature prior to widespread clinical implementation and requires prospective validation, it suggests that a subtype-directed approach to the use of NAC in MIBC can improve overall survival, QALYs, and be cost-effective within a single-payer healthcare system. s