Dr. Abbosh started his lecture by commenting that detectable biomarkers are representative of the underlying tumor, with such biomarkers having clinical utility/correlation with regards to predicting: (i) disease presence/absence, (ii) disease recurrence/disease-free states, and (iii) response to chosen therapy. It is important to note that such biomarkers are dynamic and are, presumably, best applied to localized disease states.

The principles of urinary DNA biomarkers can be broken down into four distinct domains.

Dr. Abbosh went on to give a case presentation of a 65-year-old male who presented with T1 + CIS disease in 2015 and received BCG with subsequent CIS recurrence in 2020 who again received BCG. This patient had a subsequent normal blue light cystoscopy and CT urogram with a urine liquid biopsy testing for TP53 R248Q and ERBB2 S310F.

Dr. Abbosh next went on to present a study by Birkenkamp-Demtroder et al. that evaluated assay development for surveillance using genomic variants in cell-free tumor DNA from plasma and urine samples. In this retrospective study of 12 patients (337 samples) with non-muscle invasive bladder cancer (NMIBC) who subsequently developed recurrent or progressive/metastatic disease, the authors demonstrated that patients with progressive disease showed significantly higher levels of tumor DNA in plasma and urine before disease progression, compared to patients with recurrent disease (p=0.032). Notably, disease-free patients had no detectable tumor DNA, in contrast to patients with non-invasive disease who continued to have detectable DNA in plasma and urine. It is important to be cognizant of the presence of significant intra-patient heterogeneity, likely due to either tumor heterogeneity or assay performance.1 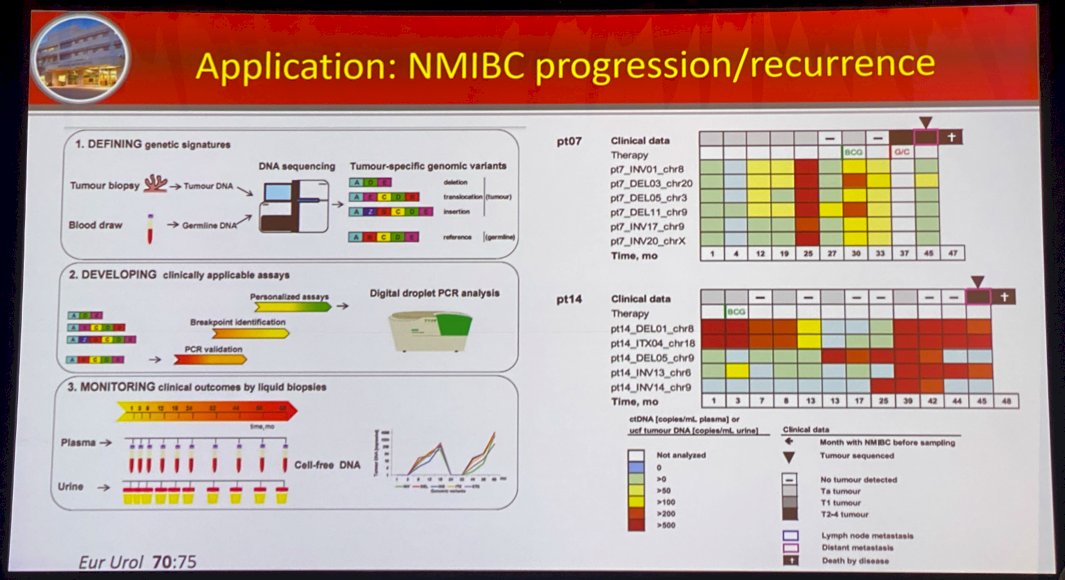 Dr. Abbosh next went on to present a key tool in this space: unique molecular identifiers. He discussed the work by Kinde et al. who developed the Safe-Sequencing System (“Safe-SeqS”), an approach to significantly improve the accuracy of massively parallel sequencing instruments to detect rare variant allele frequencies (<1%). This assists with distinguishing Taq errors from real variants. This technology was applied to their assay UROseek with 83% sensitivity.2 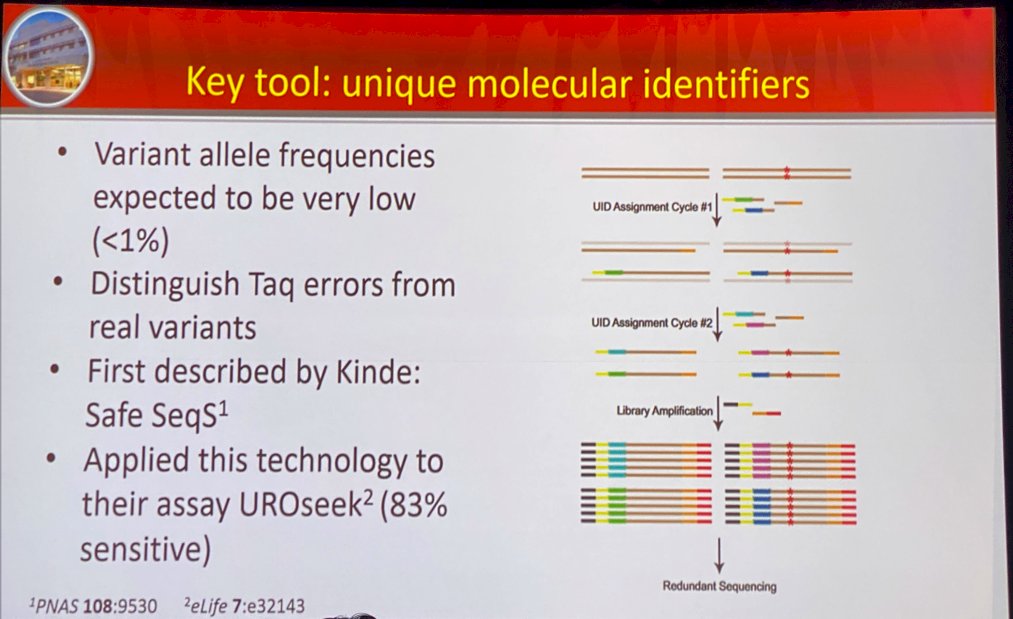 Dr. Abbosh went on to present data on the urine tumor DNA (utDNA) biomarker called utDNA CAPP-Seq (uCAPP-Seq) which incorporates urine cancer personalized profiling. It ‘selects’ for the most frequently mutated exons in a targeted panel, with mutations of the PLEKHS1 promoter present in 46% of patients. There was a 70% correspondence between urine and tumor mutational burdens, with ~70% of tissue mutations found in urine and vice versa. The uCAPP-Seq test outperformed cytology and cystoscopy combined, detecting 100% of bladder cancer cases detected by cytology and, notably, 82% of cases that cytology missed. As demonstrated in the right most figure in the image below, patients that were utDNA negative had >80% recurrence-free survival at 15 months compared to definite 15-month recurrence in the utDNA positive cohort.3 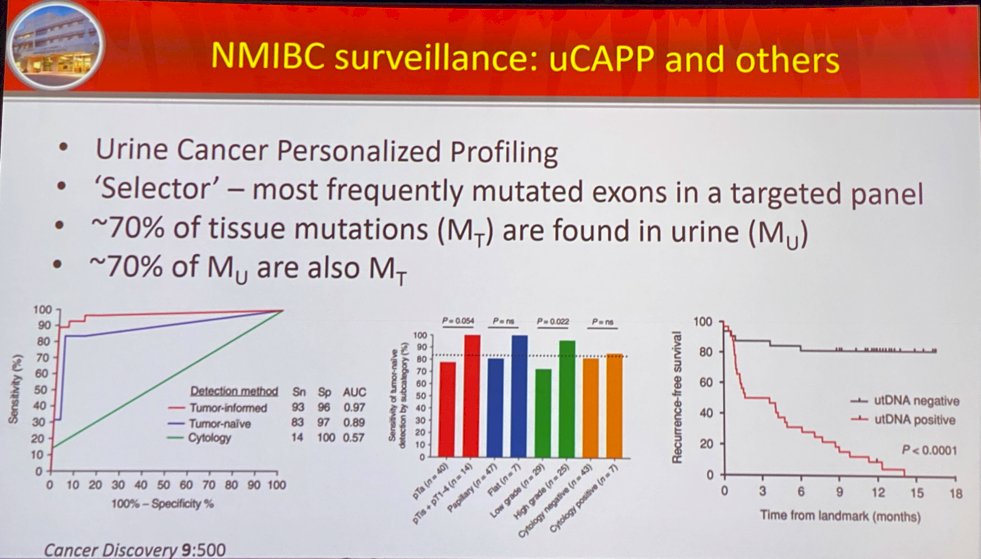 A group from Washington University, MO adopted a modified version of uCAPP and applied it to the urine of 42 patients on the day of radical cystectomy, 19 of which had undergone neoadjuvant chemotherapy. Patients with no pathologic complete response (pCR) had significantly higher utDNA levels (p<0.001 compared to pCR patients and healthy controls) with an area under the curve (AUC) value of 0.91 to predict no pCR. 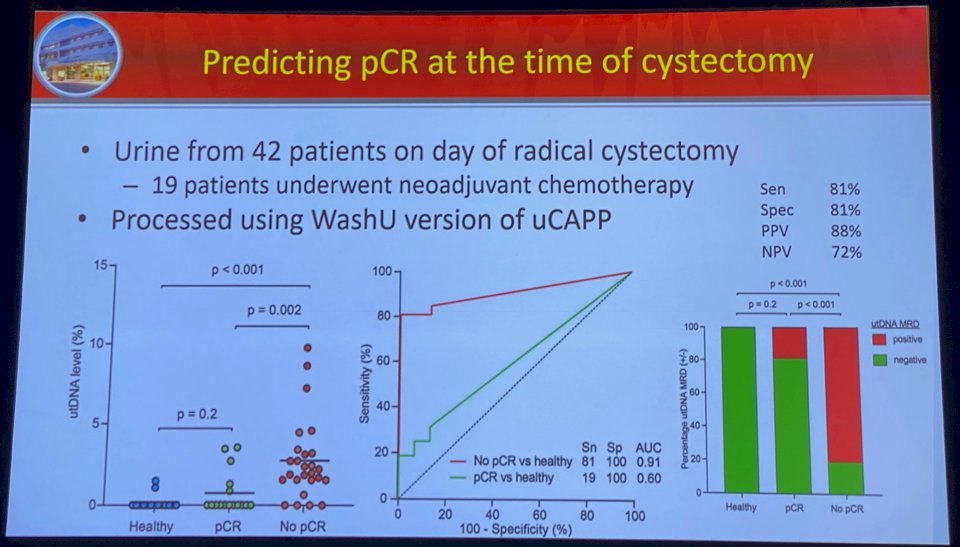 Dr. Abbosh went on to present his own lab’s urine biopsy test: Urine Test for Residual Disease (U-TeRD). This test, a 56-gene panel, is designed for bladder sparing in ypT0 muscle invasive bladder cancer cases. It has been tested in separate cohorts:

The performance characteristics of this test were: 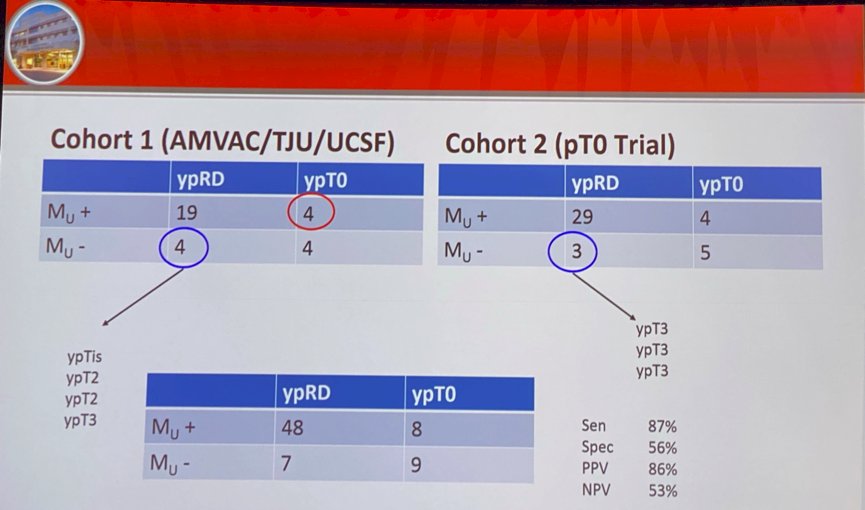 Dr. Abbosh importantly points out that normal aged urothelium contains genetic variants that act as confounders in such situations.