The European Randomized Study of Screening for Prostate Cancer (ERSPC) is a landmark trial that has shown significant reductions in prostate cancer mortality after 9 and 11 years of follow-up. However, screening has been deemed by many to be controversial due to adverse events such as overdiagnosis. In the 13-year follow-up of this study1, in men aged 55-69, the relative risk reduction for prostate cancer-specific mortality was 27% in the screening arm (figure 1).

Figure 1 - Estimates of cumulative prostate cancer mortality in the ERSPC trial after 13 years of follow-up: 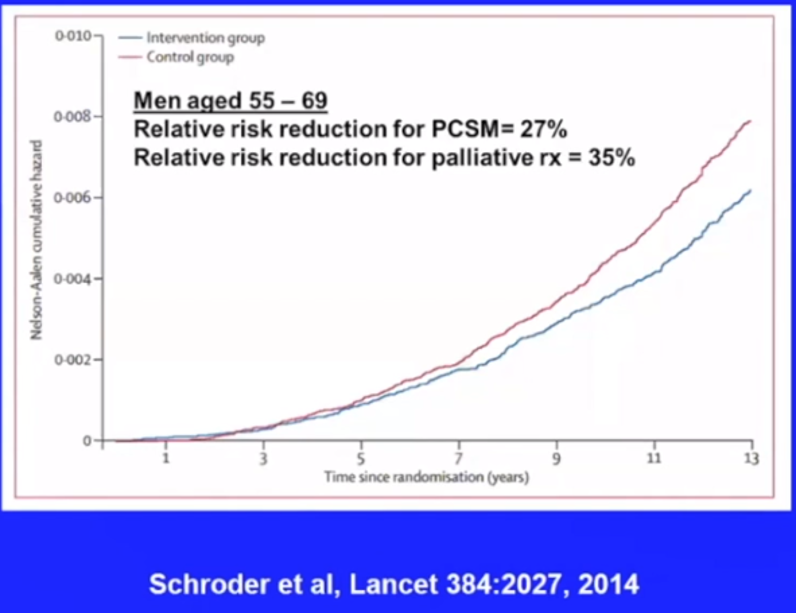 The main harms of screening include acute complications, overdiagnosis, and overtreatment. There are several ways to avoid overdiagnosis, which include:

Prostate specific antigen (PSA) has known limitations, including the fact that it has low specificity. PSA is prostate-specific but not prostate cancer-specific. Most men with elevated PSA do not have prostate cancer.

Over the years, there have been several tools that have been added to our armamentarium in an attempt to improve sensitivity and specificity (Table 1). 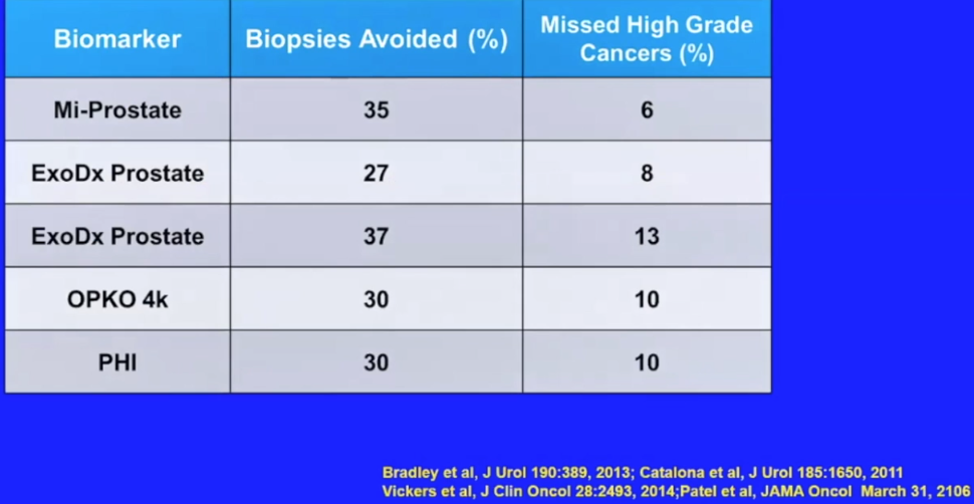 In prostate cancer cells, there is the production of structurally modified proteins resulting from cancer. Many of the protein isoforms that are created are cancer-specific because of their three-dimensional structure. IsoPSA is a novel assay that predicts cancer risk based on measuring the structure rather than the concentration of these cancer-specific isoforms. A validation study of this novel biomarker has shown that the area under the curve for Gleason 7 or above cancer is approximately 0.82 (Figure 2). It has also been shown to identify quite accurately patients with cribriform and intraductal histology. It has a negative predictive value of 92% for the absence of high-grade disease and a 50% positive predictive value for high-grade cancer. Initial yet unpublished data has shown that usage of IsoPSA has resulted in a 56% reduction of biopsies and an 18% reduction in the use of MRI.

Figure 2 – IsoPSA validation study – prediction of Gleason 7 or above disease:

The potential algorithm for screening patients for prostate cancer by Dr. Klein is shown in figure 3. This algorithm still requires a prospective evaluation vs. imaging first approach.

Next, Dr. Klein moved on to talk about the unmet need for cancer screening in general. Aside from the more common cancers (breast, cervical, and colorectal), in most cancers, there are no explicit U.S. Preventive Services Task Force (USPSTF) screening guidelines (Figure 4). 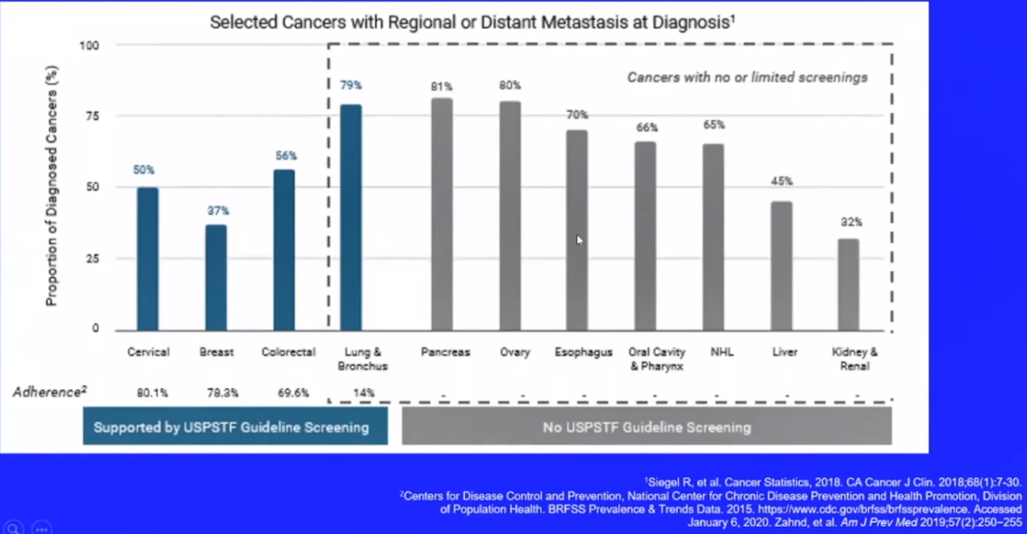 However, the future of screening is based on the fact that tumors shed biological substrates in the blood, which can, in turn, be collected and used as a liquid biopsy. Using the blood droplets collected, digital PCR can be performed.

In the CCGA study3 (Figure 5), the authors performed targeted methylation analysis of cfDNA and detected and localized >50 cancer types, including high-mortality cancers that lack screening paradigms (Figure 6).  The specific detection rates for the various cancers that were analyzed are shown in Figure 7. Importantly, this targeted methylation approach localized the tissue of origin with >90% accuracy, which will be critical for directing follow-up care.

In summary, the CCGA methylation-based cfDNA assay was able to diagnose more than 50 cancers, with a 43% positive predictive value, a 0.7% false-positive rate, and a 44% sensitivity rate for stages 1-3 for all cancers. Lastly, the tissue localization accuracy was 93%. These data show great promise for this potential game-changing biomarker. 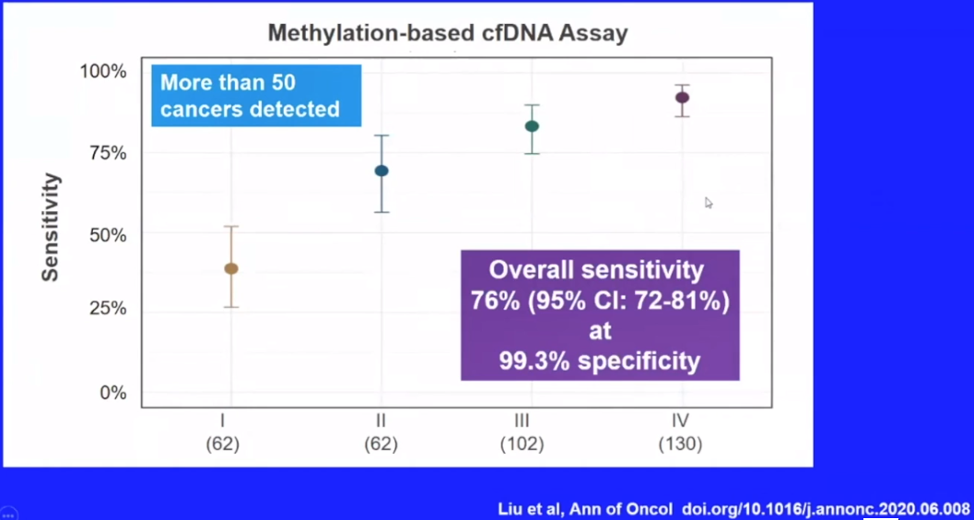 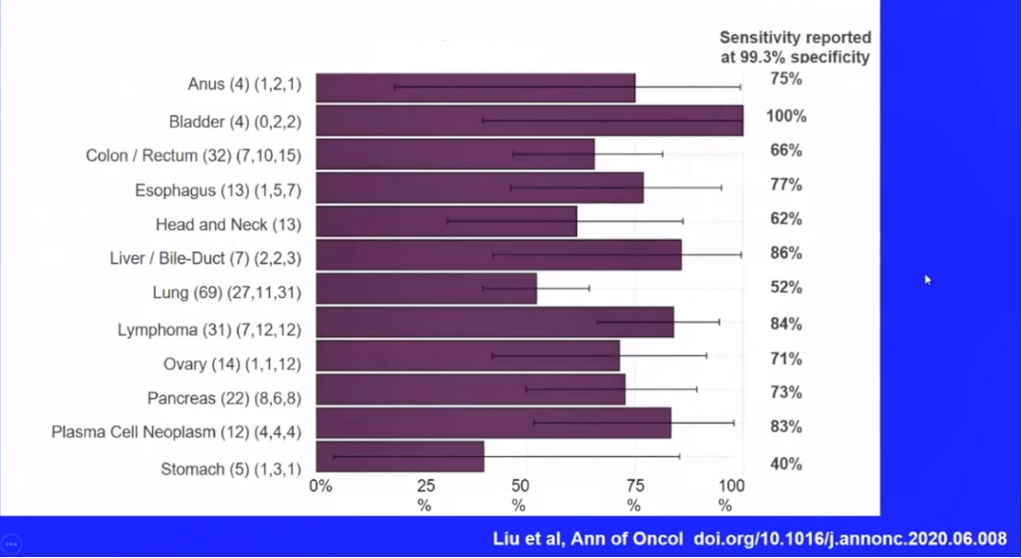