There are well-known established prostate cancer risk factors, including age, family history, and race, which could stem from racism.
Systemic (institutional) racism is a form of racism that is embedded in the everyday operation of society. It produces and maintains systems/structures that operate via a process that disadvantages groups in a consistent manner across time and place. This ultimately produces disparities between groups that can be seen in:


Next, Dr. Mahal moved on to discuss the disparities in prostate cancer. Black men have a higher lifetime probability of developing and dying from prostate cancer (Table 1). Black men also have more advanced and aggressive disease at presentation (Figure 1).

Table 1 – Probability of being diagnosed and dying from prostate cancer: 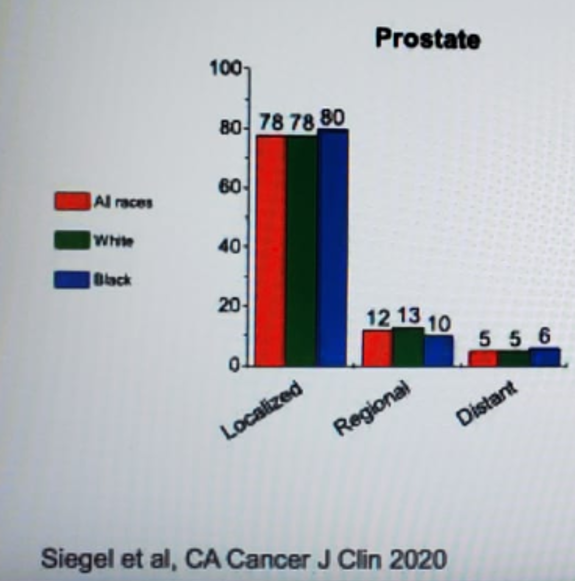 Despite having a greater prostate cancer burden and despite accounting for 12-14% of the United States (US) population, Black men are poorly represented in randomized clinical trials. For example, In the US PLCO screening trial, only 4.4% of men were Black. Additionally, 1/3 of the trials leading to drug approval from 2008-2013 did not report racial makeup, and in low-risk, conservative management trials, <1-2% of volunteers were Black. The only exceptions are several RTOG trials in localized prostate cancer that have enrolled approximately 20% Black men. 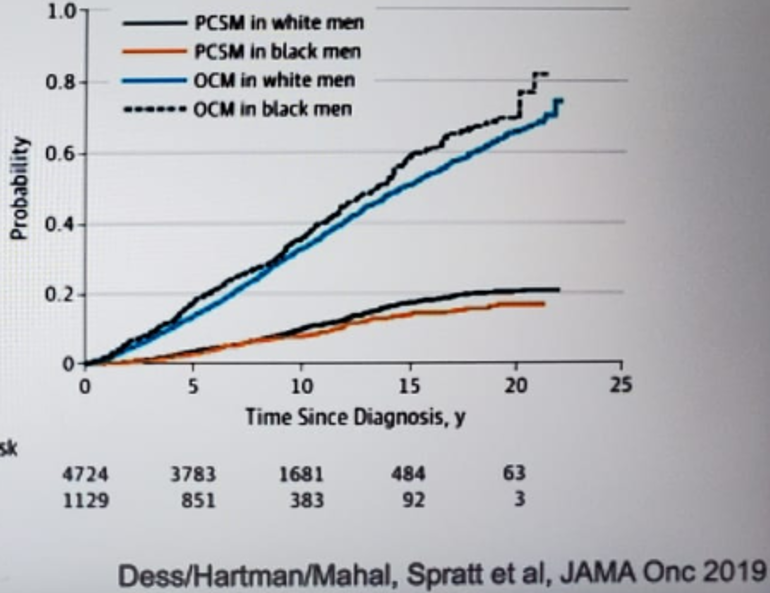 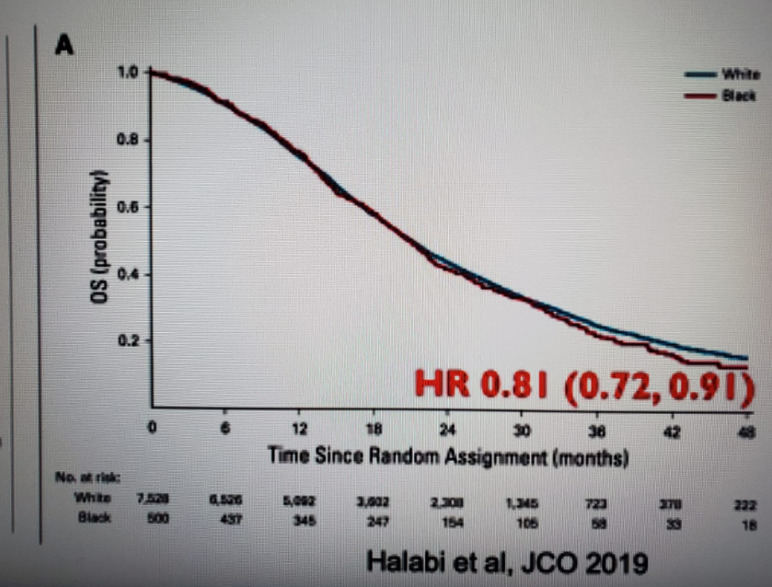 Equal access is the main goal we should attempt to reach. Unfortunately, there is data showing significant disparities in insurance rates among White and Black men (Table 2).

Similar outcomes on survival curves in “equal” settings don’t entirely account for population mortality differences, as can be seen in Figure 4.

Dr. Mahal moved on to discuss systemic racism and precision medicine/genomics in prostate cancer disparities. Trends in genomics and “precision medicine” may exacerbate disparities. Genomics risk scores are poised to improve risk-prediction and biomedical outcomes. However, most genomic studies are based on Eurocentric cohorts and therefore tend to be less accurate than others. Approximately 80% of all participants in the GWAS catalog are of European descent despite making only up to 16% of the population (Figure 5).

Figure 5 – Ancestry of GWAS participants over time as compared with the global population: 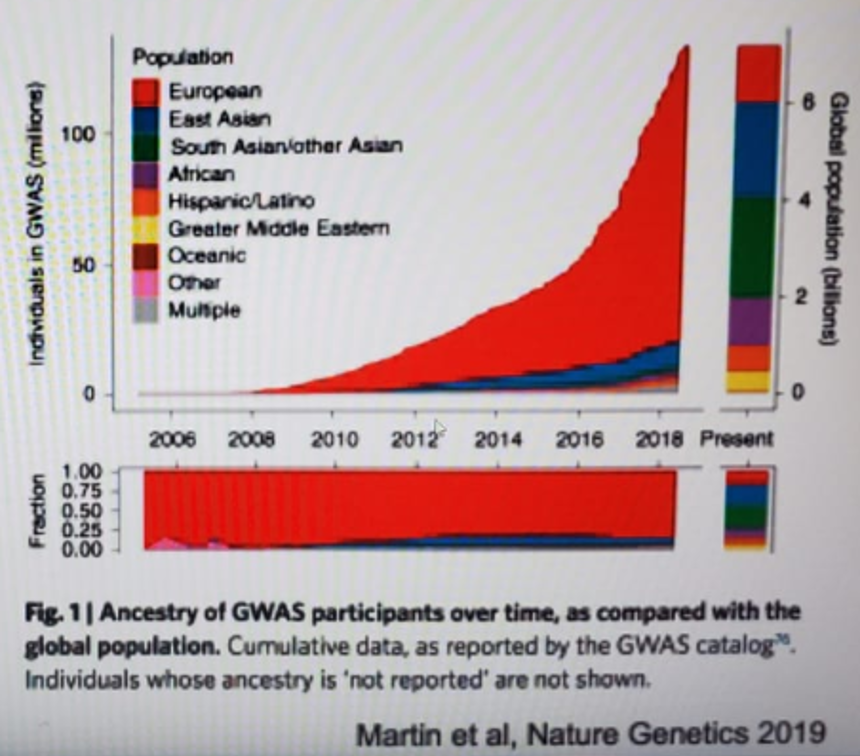 Structural racism is affected by many various factors (Figure 6), and racial disparities in prostate cancer are caused by a multitude of factors and interactions (Figure 7). 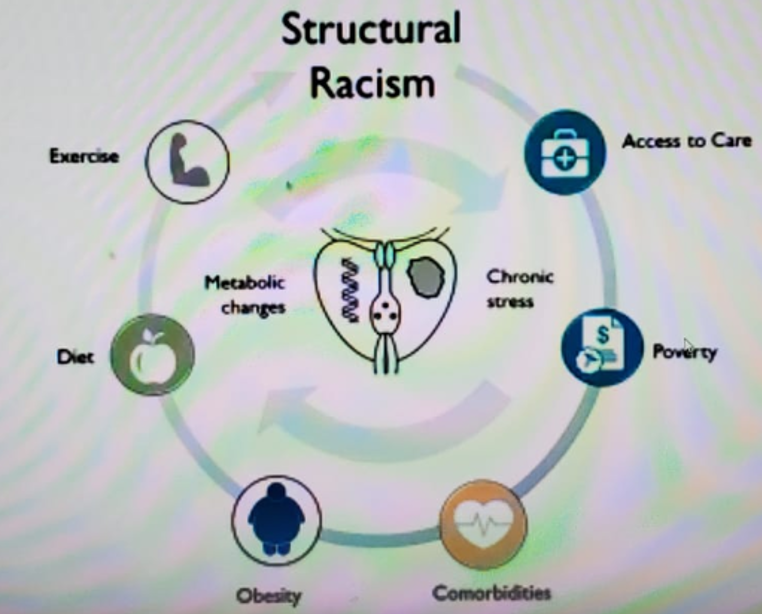 Figure 7 – Why are there racial disparities in prostate cancer: 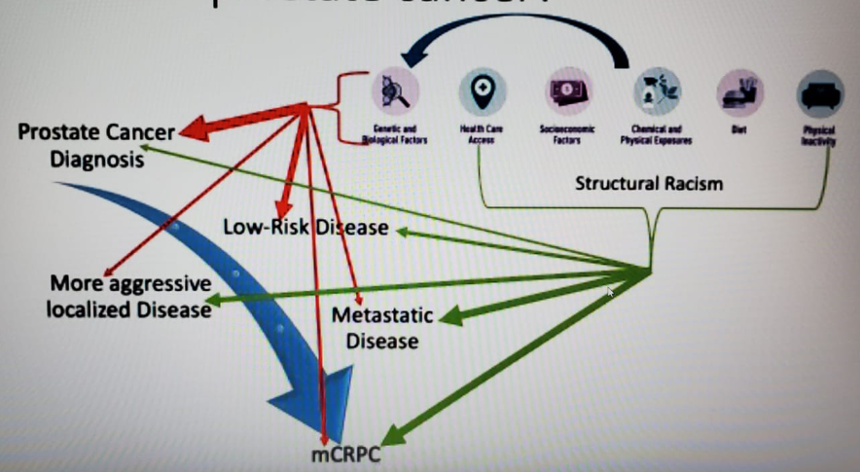 Currently, there are many unanswered questions. We need to better understand healthcare system factors, genetic susceptibility, social factors including racism, lifestyle factors, and health behaviors, tumor-related factors, and the interaction between genes and the environment (=The “biological” implications of racism).

In order to answer these many questions and address all prostate cancer disparities, several steps are required


Dr. Mahal concluded his excellent talk by stating that involving patients and the community as partners rather than subjects is key. This needs to be done through community outreach and engagement, which works best with diverse oncology workforce, education, transparency, owning history of mistakes, acknowledging racism as a risk factor, and lastly, establishing close collaboration with minority community leaders and institutions.