Washington, DC (UroToday.com) As part of the SUO 2019 advanced prostate cancer session, Dr. Samuel Denmeade discussed his work with bipolar androgen therapy (BAT) for men with castration resistant prostate cancer (CRPC). Dr. Denmeade reminds us that metastatic prostate cancer remains an incurable disease, with a median overall survival in the CRPC state of three years. The mainstay of treatment is androgen deprivation therapy (ADT), however it is associated with many side effects:

One of the main challenges of treating advanced prostate cancer is the development of resistance with each subsequent line of therapy. For example, enzalutamide in PREVAIL had a PSA progression-free survival of only 11.2 months. According to Dr. Denmeade, there are three phases of androgen inhibition: shock, adaptation, and resistance. The shock phase is when there is androgen receptor activity inhibition, which is followed by adaptation, namely androgen receptor overexpression, gene amplification, and development of ligand-independent androgen receptor variants.

The hypothesis for BAT is that men with CRPC could respond to rapid cycling between polar extremes of supraphysiologic and castrate testosterone levels, whereby rapid cycling disrupts adaptive autoregulation of the androgen receptor. Adaptive downregulation of the androgen receptor expression may re-sensitize CRPC to androgen ablative therapies. Schematically, BAT is as follows: 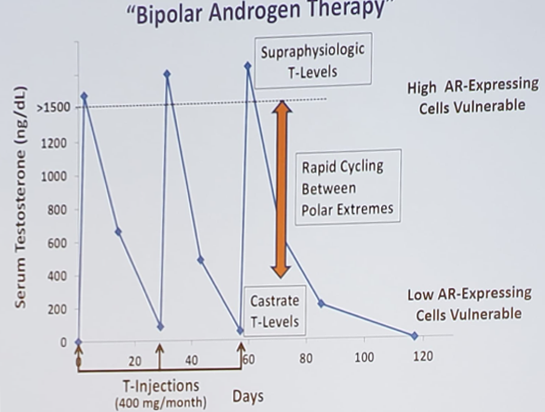 Dr. Denmeade’s group conducted the RE-sensitizing with Supraphysiologic Testosterone to Overcome Resistance (The RESTORE Study), which the schema is as follows:

In the post-enzalutamide patients, the >50% PSA response was 30%, any PSA decline was 51%, the median progression free-survival was 8.6 months, and the objective response rate after 3 cycles of BAT was 43%.1 Additionally, 71% of patients with a >50% decrease in PSA had a median duration response of 4.8 months. 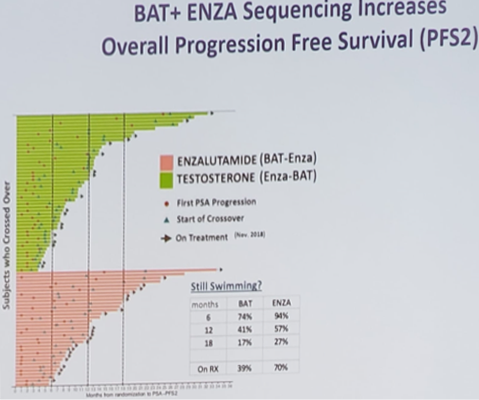