Prior to 2014, there were only a handful of impactful clinical trials in this disease space, specifically those that stratified patients by disease volume. SWOG S8894 tested bilateral orchiectomy +/- flutamide, stratifying 1,387 patients by minimal vs extensive disease. The extensive disease was defined as appendicular skeletal involvement (+/- axial skeleton involvement), visceral metastases, or both.1 There was no significant difference between the two groups in regards to overall survival (OS) (p = 0.14). The estimated risk of death for flutamide as compared with placebo was HR 0.91 (90% CI 0.81 to 1.01). Furthermore, flutamide was not associated with enhanced benefits in patients with minimal disease. In 2008, MD Anderson Cancer Center conducted a trial of ADT +/- ketoconazole + doxorubicin alternating with vinblastine + estramustine, stratifying patients by high and low volume disease.2 Low volume disease in this trial was defined as two or less bone metastases and no visceral metastases. Among 286 patients, the median time to progression was 24 months (95% CI, 18 to 39 months) in the standard therapy arm, and 35 months (95% CI, 26 to 44 months) in the chemohormonal group (p = 0.39). At median follow-up of 6.4 years, overall survival was 5.4 years (95% CI, 4.7 to 7.8 years) in the standard therapy arm versus 6.1 years (95% CI, 5.1 to 10.1 years; p = 0.41). Chemotherapy significantly increased the burden of therapy, with 51% of patients experiencing an adverse event of grade 3 or worse, especially thromboembolic events.

Ultimately, patients with mCSPC have variable outcomes with testosterone suppression. Combining data from CHAARTED and GETUG15 (high volume disease being defined as visceral metastases and/or 4 or more bone metastases with at least one beyond the vertebra and pelvis), the median OS outcomes are as follows:

There are interesting findings when assessing docetaxel in mCSPC by volume and de novo vs metachronous presentation. When looking at the initial OS data from CHAARTED, over a median follow-up of 28.9 months there was a significant survival advantage (13 months) to the early administration of docetaxel (HR 0.61, 95% CI 0.47 to 0.80).3 On follow-up analysis at a median of 53.7 months, the results are relatively stable with the docetaxel arm maintaining a survival advantage (10 months; (HR0.73, 95% CI 0.59 to 0.89).4 When stratifying by high volume, in the original analysis there was a 17 month advantage for docetaxel (HR 0.60, 95% CI 0.45 to 0.81), which is durable in the subsequent analysis (17 months, HR 0.60, 95% CI 0.50 to 0.79). However, this is clearly not the case in the low volume patients. In the original CHAARTED analysis the median OS was not reached (HR 0.60, 95% CI 0.32 to 1.13), and there is no clear benefit in the follow-up analysis (0 months; HR 1.04, 95% CI 0.70 to 1.55). The quality of life assessment for CHAARTED demonstrated that ADT alone in low volume patients had no change in the quality of life over 12 months, however, there was a decline for high volume patients, likely secondary to progression of disease. In patients receiving docetaxel, there was a decline in quality of life in low volume patients, however there was no decline in high volume patients.5

There are several points that may explain this heterogeneity in outcomes when assessing GETUG15, CHAARTED and STAMPEDE:

Since 2014, there have been a plethora of trials assessing androgen receptor inhibition in patients with mCSPC. LATITUDE evaluated ADT + abiraterone compared to ADT alone among men with high-risk metastatic hormone-sensitive prostate cancer (mHSPC).6 High-risk was defined as meeting at least two of three criteria: (i) Gleason score ≥8, (ii) presence of ≥3 lesions on bone scan, or (iii) presence of measurable visceral lesions. Patients were randomized 1:1 to either ADT + abiraterone (n=597) or ADT + placebo (n=602). Over a median follow-up of 30.4 months, patients treated with ADT + abiraterone had a 38% risk reduction of death (HR 0.62, 95%CI 0.51-0.76) compared to ADT + placebo. Median OS was not yet reached in the ADT + abiraterone arm, compared to 34.7 months in the ADT + placebo arm. Using the CHAARTED definition for high volume, patients in LATITUDE were recently assessed for OS benefit stratified by disease volume. These results were presented at GU ASCO 2019 by Dr. Kim Chi – high volume patients had a survival advantage with ADT + abiraterone (16 months; HR 0.62, 95% CI 0.52 to 0.74), whereas there was no benefit in low volume patients (not reached; HR 0.72, 95% CI 0.47-1.10). The STAMPEDE abiraterone trial also recently assessed OS outcomes by volume of disease (95% de novo). Similar to LATITUDE, there was a survival advantage for ADT + abiraterone in the high risk patients (HR 0.54, 95% CI 0.41-0.70), however there was a benefit for low volume disease (HR 0.66, 95% CI 0.44-0.98).

Quality of life studies have also looked at the “Amides” in mCSPC. Patients on either apalutamide or enzalutamide reported a mild increase in fatigue. Looking at a composite variable called deterioration free survival (death, clinical progression, cessation of study treatment, or a 10-point decrease in quality of life score), deterioration free survival improved with enzalutamide because early impairments in specific aspects of health related quality of life did not outweigh the subsequent benefits of delayed clinical progression. Furthermore, the benefits at 3 years were smaller with early docetaxel than without docetaxel.

As follows is a summary of treatment benefit for overall survival in mCSPC: 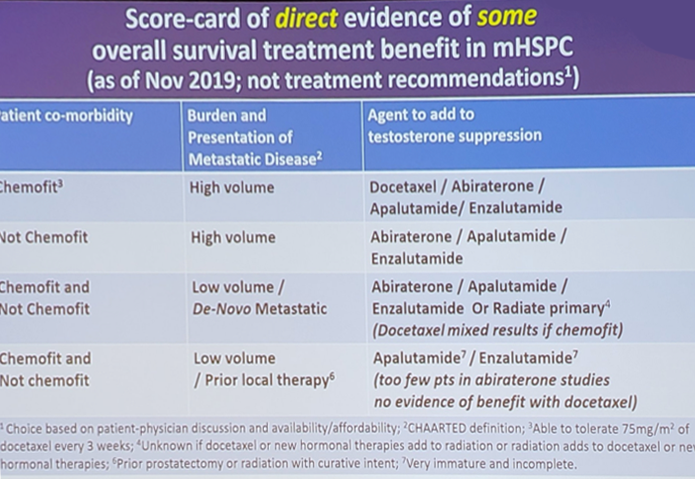 Dr. Sweeney concluded his talk with several summary statements regarding deciding which systemic therapy for which patient with mCSPC: