Overall, there were 457 patients that had a prostate biopsy. All biopsies were systematic 14 cores with or without targeted ultrasound or mpMRI fusion cores. The investigators defined the sensitivity, specificity, negative predictive value, and positive predictive value of each biomarker, mpMRI, transrectal ultrasound, and PSA density for the detection of all prostate cancers and specifically high-grade prostate cancer (defined as Gleason grade of 3+4 or higher). Multivariate logistic regression modeling adjusting for age, PSA, prostate volume, digital rectal examination, family history of prostate cancer, and history of prior negative biopsy was performed to determine each biomarker’s ability to predict the presence of any cancer on biopsy or high-grade prostate cancer, with or without imaging.

The mean age of patients undergoing biopsy was 65.5 years (+/- 7.68 years), 70% were Caucasian, 5% were African American, and 88% had no family history of prostate cancer. There were 73% patients that were biopsy naïve and the median PSA was 6.32 ng/mL (IQR 4.76-8.70). ExoDx had the highest sensitivity overall, but the lowest specificity, while SelectMDx had the lowest sensitivity but higher specificity than the other biomarkers for detecting clinically significant cancer. mpMRI with a PIRADs 4 or 5 lesion (or a positive lesion on TRUS) had the highest specificity but sensitivity was considerably lower than 4K or ExoDx sensitivities. Multivariate logistic regression modeling showed that a positive result in any one of the biomarkers or imaging (mpMRI PIRAD 4 or 5 lesion or positive lesion on TRUS) was strongly associated with finding high-grade disease. Furthermore, combining mpMRI with a biomarker increased predictive power for detecting clinically significant cancer. As follows are the results for missed high-grade cancer cases and the number of avoided biopsies: 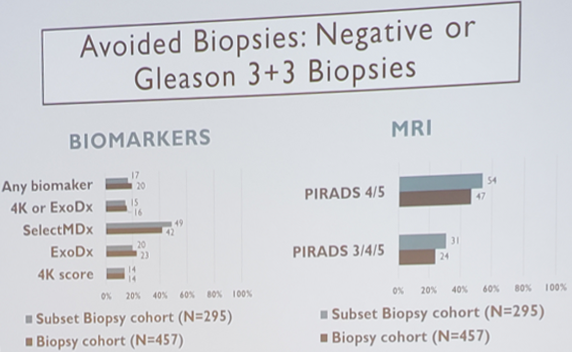 Dr. De La Calle and her colleagues from UCSF concluded their study with the following conclusions: