Washington, DC (UroToday.com) The recipient of this year’s Huggins Medal is Dr. Laurence Klotz from the University of Toronto and Sunnybrook Medical Centre. Dr. Klotz has 470 peer reviewed manuscripts and six books. His basic science research interests are in the role of micronutrients and diet in prostate cancer prevention and translational research. His research lab has been active for 30 years, producing several patents and a biotech company. Dr. Klotz’s clinical research interests have been in the areas of active surveillance, image-guided therapy, molecular biomarkers, and androgen receptor targeted therapy; additionally, he has lead numerous randomized trials in prostate cancer. His awards include the Queen’s Jubilee Medal in 2013 for meritorious public service, and in 2014 he received the Urologic Oncology Medal in 2014. He’s also received Canada’s highest civilian award, the Order of Canada, and the Harold Warwick Prize from the Canadian Cancer Society for international contributions to cancer control.

Dr. Klotz notes that in fact he is one of six urology recipients of the Order of Canada, including Drs. Al Morales, Mostafa El Hilali, Larry Goldenberg, and Martin Gleave. He also notes that he is the fourth person in his family to win the award, including his maternal grandmother, uncle, and his father, also a urologist.

Throughout his talk, Dr. Klotz highlighted books that have influenced him over the years, starting with “The Politics and the English Language” by George Orwell, a book that examines the connection between political orthodoxies and the debasement of language and encourages concreteness and clarity instead of vagueness and individuality over conformity. Dr. Klotz notes that his interactions with Dr. Willet Whitmore, while he was a fellow at Memorial Sloan Kettering Cancer Center, taught him that the biology of cancer drives the outcome. One of the first papers that piqued his interest was “Natural History of Localized Prostatic Cancer Managed by Conservative Therapy Alone”1 whereby 120 patients were followed for a median of 7 years, 4% died of prostate cancer, the actuarial cancer specific survival was 75%, and 40% died of other causes. Moving forward to 1994, Dr. Klotz took note of the paper by Dr. Gerald Chodak highlighting conservative management of clinically localized prostate cancer.2 This pooled analysis of 828 cases from six studies showed that factors having an effect on disease-specific survival were grade 3 tumors (RR 10.04) and age under 61 years (RR 0.32). Ten years after diagnosis, disease-specific survival was 87 percent for men with grade 1 or 2 tumors and 34 percent for those with grade 3 tumors. Metastasis-free survival among men who had not died of other causes was 81 percent for grade 1, 58 percent for grade 2, and 26 percent for grade 3 disease. Subsequently, in 1998 Dr. Albertsen published his study assessing competing risk for patients with localized prostate cancer.3 In this study of the Connecticut Tumor registry, 767 men between 55-74 years of age were either not treated or treated with immediate or delayed hormonal therapy, and followed up for 10 to 20 years after diagnosis. They found that men with tumors that have Gleason scores of 2 to 4, 5, 6, 7, and 8 to 10 face a 4%-7%, 6%-11%, 18%-30%, 42%-70%, and 60%-87% chance, respectively, of dying from prostate cancer within 15 years of diagnosis depending on their age at diagnosis.

The Start of Active Surveillance was at a lunch meeting with radiation oncologists Drs. Choo and Danjoux in 1997. The primary goal was to reduce overtreatment in patients with low PSA and low-grade cancer. The strategy was to track PSA, repeat biopsies, and intervene in the setting of a short PSA doubling time or grade progression. Dr. Klotz applied to the new PCRF Canada, winning the sole grant of $35,000, which started his prospective database. The second book Dr. Klotz noted that was influential to him was “The Innovators” by Dr. Walter Isaacson discussing the explosive power of interdisciplinary collaboration.

The initial reaction to Dr. Klotz’s newly minted active surveillance algorithm was not warm. This was in an era of Dr. Pat Walsh highlighting that Gleason 6 patients were ideal for a nerve sparing radical prostatectomy and that it was unethical to withhold treatment for these men. He was also told that patients will die unnecessary deaths and that “you’ll be held responsible”, and that “you’ll never convince American physicians to stop treating patients radically.” At this point, Dr. Klotz was reading Andrew Roberts’ “Churchill,” a heroic biography of the world’s most impactful and memorable statesmen, Dr. Klotz 3rd influential book.

Since his initial active surveillance publication in 2002,4 the field has profoundly changed. There has been a recognition of overtreatment as a problem, the nature of occult high-grade disease, the predictive value of baseline parameters, flaws in PSA kinetics, the utility of mpMRI, multiple large registries (with >15,000 patients), and ~3,000 publications on the topic. What we know is the importance of molecular genetics and that Gleason 3 genetically resembles normal cells in most cases, the metastatic potential is essentially zero, but that it can invade locally and should still be termed “cancer”. According to Dr. Klotz, two books every oncologist should read are “The Emperor of all Maladies” and “The Gene” both by Siddhartha Mukherjee. Another influential book to Dr. Klotz was “Life on the Edge” by Johnjoe McFadden and Jim Al-Khalili discussing the fundamental importance of quantum effects in biological processes, including the origin of life, evolution, human consciousness, and many biological mysteries.

Dr. Klotz highlights that there are currently many different criteria for active surveillance as highlighted in the following table: 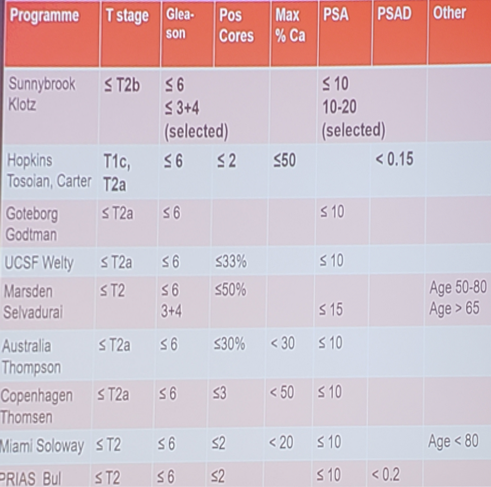 The long-term survival of active surveillance has been excellent. In Dr. Klotz’s most recent update of his prospective series published in 2015,5 there were 819 survivors with a median follow-up time from the first biopsy is 6.4 years (range, 0.2 to 19.8 years). One hundred forty-nine (15%) of 993 patients died, and 844 patients were alive; there were 15 deaths (1.5%) from prostate cancer. The 10- and 15-year actuarial cause-specific survival rates were 98.1% and 94.3%, respectively. An additional 13 patients (1.3%) developed metastatic disease and are alive with confirmed metastases (n = 9) or have died of other causes (n = 4). At 5, 10, and 15 years, 75.7%, 63.5%, and 55.0% of patients remained untreated and on surveillance. Looking deeper into the patients that developed metastatic disease, Dr. Klotz notes that these patients were the ones diagnosed with understaged intermediate risk disease, conferring prostate cancer mortality risk nearly 4-fold higher (HR 3.75).6

Dr. Klotz’s contributions to active surveillance have also included trials assessing the utility of mpMRI in active surveillance. The ASIST trial was designed to determine, in men (n=273) recently diagnosed with grade group 1 (GG1) prostate cancer, if MRI with targeted biopsy could identify a greater proportion of men with GG ≥2 cancer on their confirmatory biopsy compared with systematic biopsies.8 Eligible patients were men diagnosed with GG1 cancer within 1 year prior to study entry in whom a confirmatory biopsy was indicated. Patients were randomized to 12-core systematic biopsy or MRI with systematic and targeted biopsy. The primary end point was the proportion upgraded to GG ≥2 in each arm. Of the MRI group, 64% had a region of interest. There was no difference observed in the rate of GG ≥2 upgrading (the intent-to-treat population, p=0.7, and per-protocol population, p=0.4), GG ≥2 upgrading within each stratum separately, or GG ≥3. In a follow-up study of this trial looking at two-year post-biopsy results,9 259 men underwent a confirmatory biopsy, 132 in the non-MRI and 127 in the MRI arm. After biopsy, 101 men in the non-MRI arm (76%) and 98 in the MRI arm (77%) continued active surveillance. There were fewer men with AS failures in the MRI (19/98, 19%) compared to the non-MRI group (35/101, 35%; p = 0.017). Furthermore, at 2-yr biopsy there were fewer men with clinically significant prostate cancer in the MRI arm (9.9%, 8/81) than in the non-MRI arm (23%, 17/75; p = 0.048).

According to Dr. Klotz, there are important limitations to mpMRI. It isn’t in real time, it requires a radiologist with a considerable learning curve, and it may miss small satellite lesions and underestimate lesion volume, which is a challenge for focal therapy targeting. Furthermore, there is a significant cost, complexity, patient anxiety, inconvenience, with several exclusions (hip replacement, pacemaker, claustrophobia). Dr. Klotz’s team has been developing a high-resolution micro-ultrasound to circumvent these issues. This ultrasound is 29 MHz compared to the conventional 6-9 MHz, with resolution down to 70 microns, with similar footprint and cost to conventional ultrasound.

Regarding active surveillance for Gleason Group 2 patients, Dr. Klotz notes that many GG2 tumors are indolent, however, Gleason pattern 4 has metastatic potential. In his opinion, this is the sweet spot for tissue based molecular biomarkers. In work that he is intimately involved in, Dr. Klotz is looking at the exosome miRNA platform, which is an analysis of urinary exosomes of small non-coding RNAs. Initial results from this platform looking a 50-250 miRNAs suggests the ability to assess the presence of cancer vs no cancer, GG1 vs GG>=2, GG1-2 vs GG>=3. Several other books that have been influential to Dr. Klotz include “Getting to Yes” by Roger Fisher and William Ury, which is a straight forward, universally applicable method for negotiating personal and professional disputes without getting angry; “A Conflict of Visions” by Thomas Sowell, which is an analysis of the opposing visions behind today’s ethical and ideological disputes; “The Second Mountain” by David Brooks, which assesses what gives life meaning (altruism and kindness) after a life of personal success and achievement.