The incidence of new persistent opioid use following surgery is approximately 6-10%, more common than any single post-operative complication1. 67-92% of patients report unused opioid medications after a surgical prescription2. Reducing the opioid oversupply may substantially impact the opioid epidemic through primary and secondary prevention. Currently, minimal data are available regarding opioid use in post-surgical urologic patients. 60% of opioid prescribed following prostatectomy and radical or partial nephrectomy went unused3. The authors of this study attempted to ascertain the number of opioids patients are actually using following urologic surgeries; and how that amount compares to what physicians are prescribing.

In the presented study, 877 urologic procedures were examined, with 606 patients being called, and 264 complete surveys being completed. Figure 1 demonstrates the varying provider prescribing patterns by surgery type. The average number of tabs prescribed ranges from 15% in a cystoscopy procedure, to 35% in radical cystectomy. Figure 2 – demonstrates the post-operative narcotic oversupply. The mean number of 5 mg oxycodone equivalents that are given to patients, which are used per procedure, range between 5 in Cystoscopy to 10 in lap nephrectomy. The percent of tablets unused ranges from 15% in testis/scrotal surgery to 25-30% in a major oncology procedure.

Interestingly, a large proportion of patients receive inadequate counseling on storage and disposal. Figure 3 demonstrates the percent of patients who were counseled on the storage and disposal of these medications. The percentages range between 20% in lap nephrectomy to 50% of patients in radical cystectomy. 17% of the patients disposed of the leftover medications through various ways, including flushing down the toilet, throwing to the trash, or down the sink, and putting them in a local drop box. 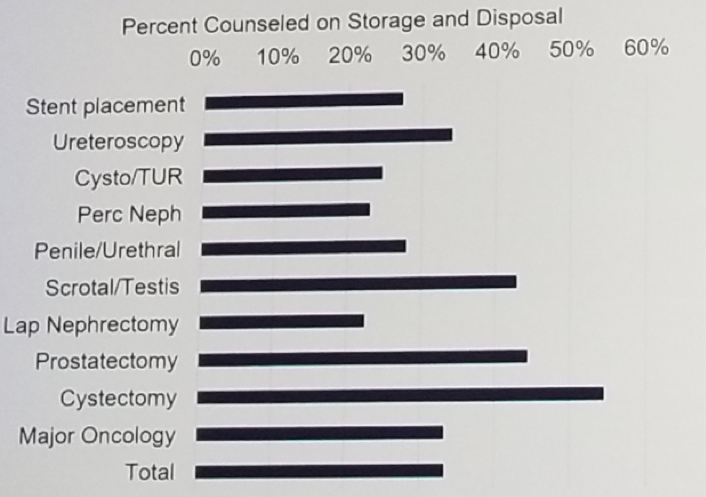 Dr. Hacker summarized her talk stating that there is substantial opioid oversupply following urologic procedures. There is inadequate counseling on storage and disposal methods. Data-driven post-operative prescribing schedules coupled with education on appropriate disposal, provide an opportunity for urologists to take an active role in opioid stewardship. A table demonstrating the proposed standard opioid prescribing schedule is shown in figure 4. Additional studies should be performed, so that awareness among urologists to this important topic can be raised. 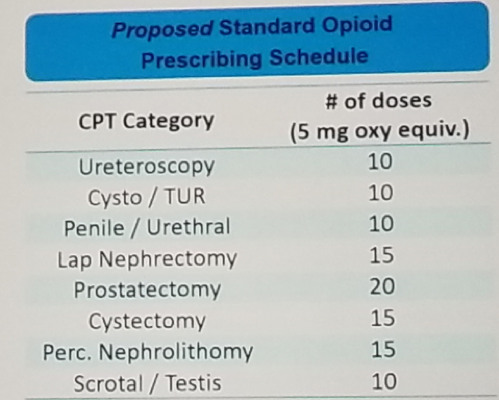