Scottsdale, Arizona (UroToday.com) Dr. Kevin Benson presented the clinical outcome, safety and the effectivance of Axonics® System at 1 year follow up in the ARTISAN-SNM study. The Axonix system is a miniaturized sacral neuromodulation (SNM) System qualified to function for at least 15 years in the body and approval for patients to undergo conditional full-body MRI scans. The Axonics System is expected to reduce or eliminate the patient risks and costs which result from the frequent replacement surgeries associated with a non-rechargeable SNM system.

There was a 129 participants with urinary urgency incontinence (UUI) across 19 centers in the US and Europe were implanted with the Axonics System in a single,non-staged procedure. Efficacy data was collected using a 3-day bladder diary, a validated quality of life questionnaire (ICIQ-OABqol), and a participant satisfaction questionnaire. Therapy responders were identified as participants with ≥50% reduction in urgency leaks compared to baseline. An as-treated analysis was performed in all implanted participants. 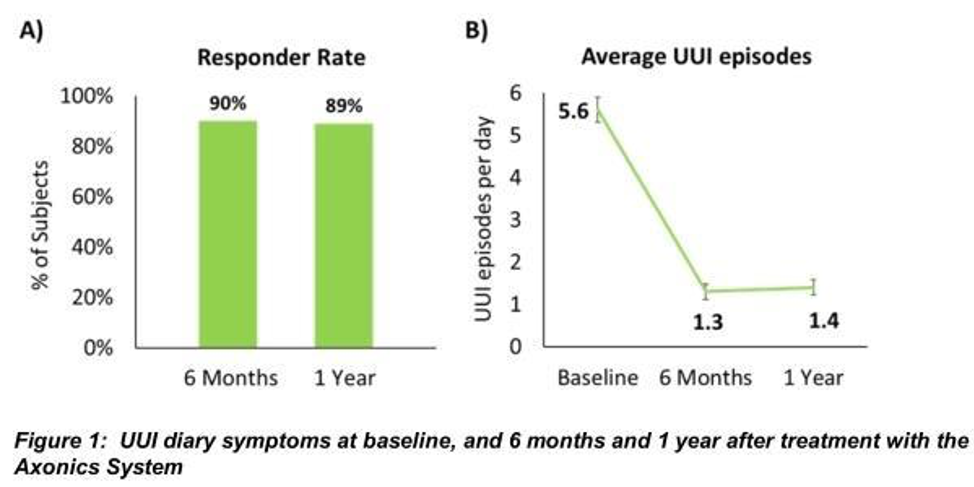 As compared to baseline, ICIQ-OABqol scores improved by 34 points, which is clinically and statistically significant (p<0.0001). Ninety six percent (96%) of participants responded that the recharging duration and frequency was acceptable, and 93% were satisfied with their SNM therapy.

The authors reported that Axonics System showed sustained safety and efficacy at 1 year for treatment of UUI. Patients reported that recharging frequency and duration of their SNM system was acceptable.