Dr. Koo began by discussing next-generation imaging tools in prostate cancer. He emphasized that, while guidelines currently recommend conventional imaging approaches, these approaches (including computed tomography and bone scan) have a relatively limited sensitivity to detect disease at the time of biochemical recurrence, particularly among men with PSA <20 ng/mL. He discussed, as highlighted below, a number of pros and cons of conventional imaging approaches. 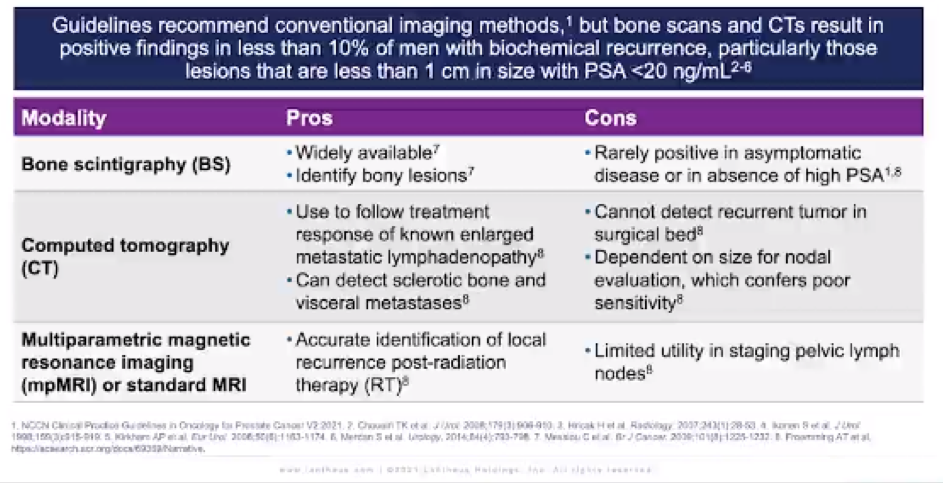 Dr. Koo then highlighted that the use of next-generation imaging (focusing on PET/CT) allows for higher sensitivity in the detection of low-volume disease. This leverages the ability of PET  to image physiologic processes, rather than simply providing anatomic assessment. As a result, this introduces new opportunities to more accurately assess disease burden. However, there is a lack of standardization of approaches.

PET imaging may be based on a number of different probes, including those that rely on increased cellular metabolism, those that target prostate cancer-specific membrane proteins and receptor molecules, and those the bine to the bone matrix adjacent to bony metastases. Increased metabolism and vascular changes associated with prostate carcinogenesis can be targeted with radiolabelled analogs of choline, acetate, glucose, amino acids, and nucleotides.

Dr. Koo then highlighted the temporal process of advanced imaging in prostate cancer. Following the initial 18F-NaF PET/CT approval in 1972, there was a long period without further innovation. In the last 10 years, there have been three further approaches that have been approved including 11C-choline, 18F-fluciclovine, 68Ga-PSMA-11, and DCFPyL. 18F-NaF PET/CT is no longer covered by the National Oncologic PET Registry. While 11C-choline PET/CT was approved in 2011, widespread adoption was limited as this was only at the Mayo Clinic and the agent has a relatively short half-life. Thus, the subsequent approval of 18F-fluciclovine PET/CT in 2016 had a much larger effect on practice patterns in the United States.

Dr. Koo then focused on 18F-fluciclovine, a synthetic amino acid labeled with 18F. This amino acid is recognized and taken up by amino acid transporters which are upregulated in cancer cells, including prostate cancer. However, it is not metabolized or incorporated into newly synthesized proteins suggesting that it does not interfere with the normal protein synthetic process. Dr. Koo emphasized that the performance of Axumin increases with increasing PSA levels. From a whole-body perspective, even at PSA levels less than 0.80 ng/mL, Axumin imaging had a much higher detection rate than historical standards using conventional imaging.

He then transitioned to discussing prostate-specific membrane antigen (PSMA) based imaging approaches. PSMA is a transmembrane protein that is significantly over-expressed in prostate cancer cells and has low levels of expression in normal tissue. There are now two FDA-approved PSMA-based PET imaging agents including 68-Ga PSMA and piflufolastat-F-18 (DCFPyL). Compared to Axumin, he emphasized that PSMA-based approaches are more specific to prostate cancer.

Dr. Koo then presented data among patients with biochemical recurrence following radical prostatectomy. In this cohort, PSMA-based imaging with 68-Ga-PSMA 11 had a detection rate of 65% in men with PSA less than 0.5 mg/mL and 100% for those with PSA above 2 ng/mL. In addition to outperforming conventional imaging, these results outperformed the detection rates for Axumin. Additionally, the use of PSMA-based imaging allowed identification of disease outside of the pelvis.

In a head-to-head study lead by Dr. Calais, Dr. Koo emphasized that PSMA-based PET/CT dramatically outperformed Axumin at all sites, except in the prostate bed. Dr. Koo then highlighted that piflufolastat-F-18 (DCFPyL) was recently approved with two separate indications. First, it may be used in men with prostate cancer with suspected metastasis who are candidates for initial definitive therapy. Second, it may be used for men with prostate cancer with suspected recurrence based on an elevated serum PSA level following initial therapy.

He then highlighted that piflufolastat-F-18 (DCFPyL) has relatively high test positivity rates, even among patients with relatively low PSA levels. There are generally comparable to the data highlighted above for 68Ga-PSMA though there is no direct comparison. Compared to conventional imaging, the sensitivity of this approach is much higher.

Dr. Koo then emphasized data from the proPSMA trial, led by Dr. Hoffman, which provided a prospective, randomized comparison of 68Ga-PSMA-11 and conventional imaging among men with newly diagnosed high-risk prostate cancer. 68Ga-PSMA-11 had higher accuracy for the identification of distant spread, more frequently resulted in changes in treatment plans, and results in fewer equivocal imaging findings. Additionally, PSMA-based imaging was associated with less radiation exposure and higher reporter agreement.

Dr. Koo closed by summarizing that approximately one-third of patients with localized prostate cancer will progress following initial treatment. The use of next-generation imaging offers the ability to identify disease which is not apparent on conventional imaging. This is likely to lead to changes in management. However, demonstrated improvements in clinical outcomes remain to be proven. Thus, conventional imaging is still the current standard of care. He emphasized, that in his opinion, PSMA-PET/CT may be indicated in patients at initial diagnosis who have negative conventional imaging and a high suspicion for metastatic disease, as well as those with biochemical recurrence following local therapy. Moving forward, he suggested that negative conventional imaging may not be required before PSMA-PET/CT in patients initially diagnosed with high-risk disease.

At this point, Dr. Finkelstein discussed the OSPREY study and the role of PSMA-PET/CT. He began by highlighting that appropriate treatment of patients diagnosed with prostate cancer relies on an accurate assessment of the extent and distribution of disease.

He highlighted that OSPREY examined the diagnostic performance of piflufolastat-F-18, compared to a histopathologic standard of truth. This trial included two separate cohorts, including patients with newly diagnosed high-risk prostate cancer who were planned for radical prostatectomy and pelvic lymph node dissection (PLND) (cohort A) and those with presumptive recurrent or metastatic prostate cancer based on results of conventional imaging studies (cohort B). In cohort A, the authors compared results of the imaging study and histopathology from pelvic lymphadenectomy. In cohort B, the results of imaging studies were compared to histopathology from a biopsy of metastatic lesions.

In cohort A, the authors assessed both sensitivity and specificity of piflufolastat-F-18 imaging as co-primary outcomes. This cohort was enriched with patients with high-grade histology (35% with Gleason score 9-10). Assessment compared to histopathologic gold standard demonstrated that the OSPREY trial met the co-primary endpoint of specificity (97.9%, 95% CI 94.5-99.4%), with the initial null hypothesis being 80%. However, it failed to meet the co-primary endpoint of sensitivity (40.3%, 95% CI 28.1-52.5%) which was not significantly different than the null hypothesis of 40%. The authors performed a sensitivity analysis defining positive nodal metastases as at least 5mm, demonstrating better performance characteristics in this analysis.

Dr. Finkelstein then discussed OSPREY cohort B, among those with suspected recurrence disease. The majority of these patients had received prior radical prostatectomy (77.4%), prior radiotherapy (62.4%), and prior systemic therapy (65.6%). Based on conventional imaging, 60% of patients had no evidence of distant metastasis while 36% had M1 disease.

As highlighted in the figure below, sensitivity and positive predictive value of piflufolastat-F-18 were high whether assessing all disease sites, bony only disease, nodal disease, or visceral/soft tissue.

For patients categorized as M0 based on conventional imaging, 58% (19 of 33) had evidence of metastatic disease on piflufolastat-F-18 PSMA-PET/CT, resulting in upstaging with the use of PSMA-based imaging. Further, for those with M1 disease based on conventional imaging, 22% (18/82) were recategorized as having M0 disease, resulting in downstaging with PSMA-based imaging. Further, 16% were reclassified within subgroups of metastatic disease (moving from M1a to M1b/c or M1b to M1c disease), again representing upstaging.

Dr. Finkelstein discussed adverse events, emphasizing that these were uncommon and mild.

In summary, Dr. Finkelstein concluded that OSPREY demonstrated that piflufolastat-F-18 PSMA-PET/CT has a high specificity for nodal metastasis in patients with high-risk prostate cancer. Further, sensitivity and positive predictive value are high for metastatic/recurrent disease. Additionally, there were no grade 4 or 5 treatment-related adverse events.

At this point, Dr. David Crawford discussed the CONDOR trial. This trial focused on men with biochemical failure, based on the effort to identify lesions that may be targeted for therapeutic intervention.

Dr. Crawford first discussed biochemical failure, emphasizing that been one-quarter and one-half of men undergoing local therapy for prostate cancer will have a subsequent biochemical recurrence. Conventional imaging (using CT scan, MRI, or bone scan) has poor sensitivity for radiographic localization of disease. The RADAR guidelines seek to provide some guidance on when and how to utilize imaging in prostate cancer. Notably, the introduction of next-generation imaging has dramatically changed the time at which we may expect to be able to derive meaningful information from imaging studies.

Dr. Crawford then discussed the CONDOR design, emphasizing that this study focused on men who had a biochemical recurrence of disease and “non-informative” standard of care imaging. Patients underwent piflufolastat-F-18 PSMA-PET/CT which was interpreted centrally by three blinded, independent reviewers. These imaging findings were assessed using a “correct localization rate” based on a composite of truth standards, with a threshold of 20%. 208 men were accrued to this study on the basis of inclusion and exclusion criteria as highlighted below.

They included men had a median age of 68 years. 49.5% had undergone radical prostatectomy alone, 14.9% had undergone radiotherapy alone, 35.6% had undergone both radical prostatectomy and radiotherapy, and 27.9% had received at least one prior systemic therapy. At baseline, the median PSA was 0.8 ng/mL (range 0.17 to 98.45). Two-third (66.8%) of patients had PSA of 2.0 ng/mL or less. Notably, 9.6% of patients had negative 18F-fluciclovine or 11C-choline PET/CT and 57.2% had negative conventional imaging.

Dr. Crawford then discussed the outcome of composite standard of truth, emphasizing that this formed a three-level sequential assessment of histopathology, imaging, and PSA findings.

Dr. Crawford emphasized that the correct localization rate was defined as the percentage of patients with a 1:1 correspondence between localization of at least one lesion with the composite standard of truth. This corresponds to the anatomically specific positive predictive value.

The standard of truth was based on histopathology for 31 patients, correlative imaging for 100, and PSA response for 1.

Additionally, Dr. Crawford highlighted that there was substantial inter-reader agreement, with Cohen’s Kappa of 0.65 (95% CI 0.58-0.73) overall.

Further, by anatomic region, there was consistency between readers for all anatomic sites.

Additionally, while detection rates increased with increasing PSA, the correction localization rate was relatively consistent and was 73.3% (95% CI 51-96%) for patients with PSA <0.05 ng/mL rising somewhat for those with PSA >5 ng/mL.

Dr. Crawford then discussed the secondary endpoint, demonstrating that 64% of patients had a change in their intended management as a result of the findings of piflufolastat-F-18 PSMA-PET/CT. This included a chance from systemic therapy to salvage local therapy in 43 patients (21%) and the converse in 58 patients (28%). Further, 9 patients (4%) transitioned from therapy to observation while 49 (24%) transitioned from observation to therapy.

However, these data do not yet prove a clinical benefit for these patients.

In closing, Dr. Crawford highlighted that the CONDOR study demonstrates the value piflufolastat-F-18 PSMA-PET/CT in men with biochemically recurrent disease with the majority of men having changes in management as a result of the test findings.