(UroToday.com) The Société Internationale D’Urologie (SIU) 2021 annual meeting included a master class on advanced kidney cancer with a presentation by Dr. Kevin Lu discussing nephrectomy as part of the sequencing options in metastatic renal cell carcinoma (RCC) with the primary in place. Dr. Lu notes that we are in a rapidly evolving treatment landscape for metastatic RCC, highlighted by new drugs, drug combinations, drug sequences, vaccinations, improving local management, and precision therapy. As follows is a timeline of the current therapeutics available for advanced RCC:

However, with more drugs, more drug classes, and the prospects of more to come, there are still unresolved questions and unmet needs. Dr. Lu notes that RCC behaves perhaps differently than other cancers in that some tumors are aggressive versus those that are indolent. Additionally, some RCCs recur frequently, some grow and metastasize quickly, while others grow slowly. Ultimately, the current information (clinical and pathologic data) is inadequate to differentiate between these entities. For all genitourinary malignancies, in particular RCC, it is important to assess:

Dr. Lu emphasized that in the contemporary IO-TKI trials, the majority of patients entered the trial after a prior radical nephrectomy, including 82% in the CheckMate 214 trial,1 83% in the KEYNOTE-426 trial,2 69% in the CheckMate-9ER trial,3 and 74% in the CLEAR trial,4 Furthermore, the advantage or role of cytoreductive nephrectomy is not particularly clear. In the cytokine therapy era, the SWOG trial had a survival advantage of 3 months, whereas the EORTC trial had a benefit of 10 months, with an aggregate survival advantage among these two trials of 5.8 months. In the targeted therapy era, Choueiri et al.5 reported a median OS of 19.8 months for patients undergoing cytoreductive nephrectomy versus 9.4 months for those not undergoing surgery (HR 0.44, 95% CI 0.32-0.59). Heng et al.6 reported a median OS of patients with cytoreductive nephrectomy versus without cytoreductive nephrectomy of 20.6 versus 9.5 months (p<0.0001), respectively. When adjusted for IMDC criteria to correct for imbalances, the HR of death was 0.60 (95% CI 0.52-0.69): 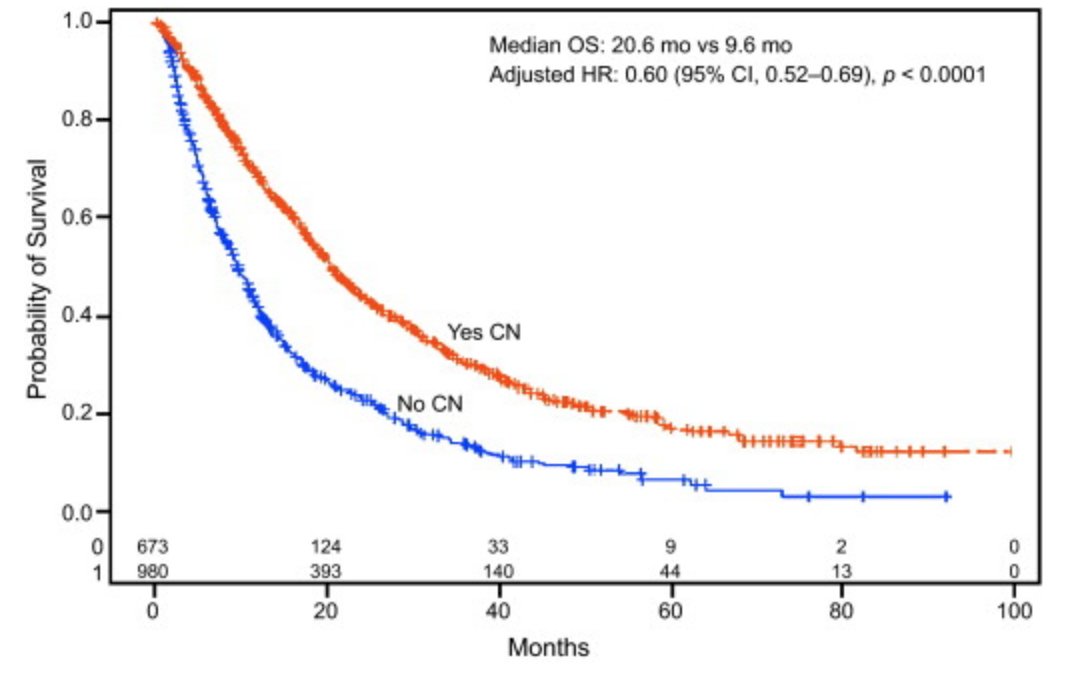 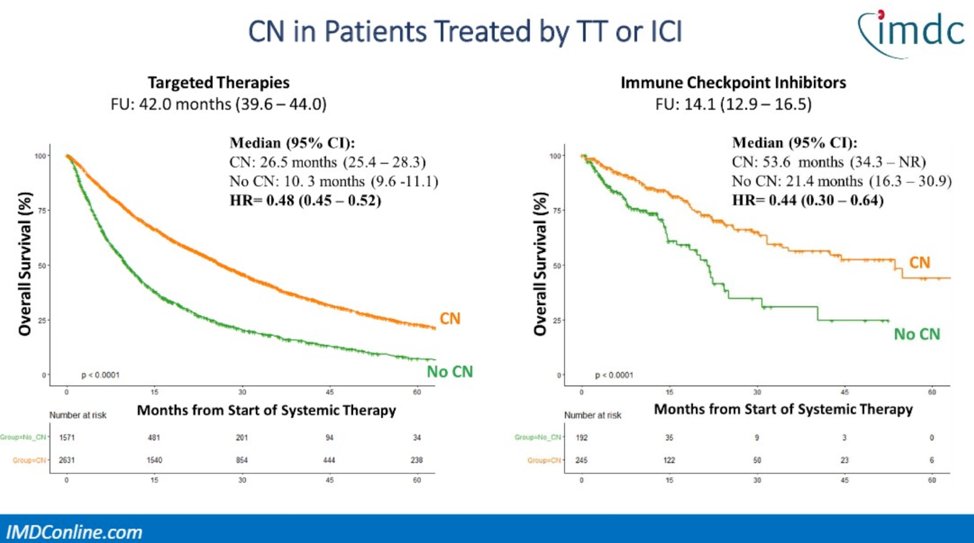 But as we know from CARMENA and SURTIME, not everyone will benefit from cytoreductive nephrectomy. In CARMENA,8 450 patients who were suitable candidates for nephrectomy were randomly assigned, in a 1:1 ratio, to undergo nephrectomy and then receive sunitinib or to receive sunitinib alone. Randomization was stratified according to prognostic risk (intermediate or poor) in the Memorial Sloan Kettering Cancer Center prognostic model, and the primary endpoint was overall survival. At the planned interim analysis, the median follow-up was 50.9 months, and the results in the sunitinib-alone group were non-inferior to those in the nephrectomy-sunitinib group with regard to overall survival (HR for death 0.89, 95% CI 0.71-1.10; upper boundary of the 95% confidence interval for noninferiority, ≤1.20). The median overall survival was 18.4 months in the sunitinib-alone group and 13.9 months in the nephrectomy-sunitinib group. The investigators concluded that cytoreductive nephrectomy should no longer be part of standard of care for patients with metastatic RCC requiring medical treatment.

According to Dr. Lu, the place for nephrectomy in the trajectory of metastatic RCC for patients with the primary in situ is for patients that need symptom palliation, those with a response to initial systemic therapy, and those with low metastatic disease burden. The EAU guidelines have excellent recommendations for guiding clinicians when making these decisions as highlighted in the following: 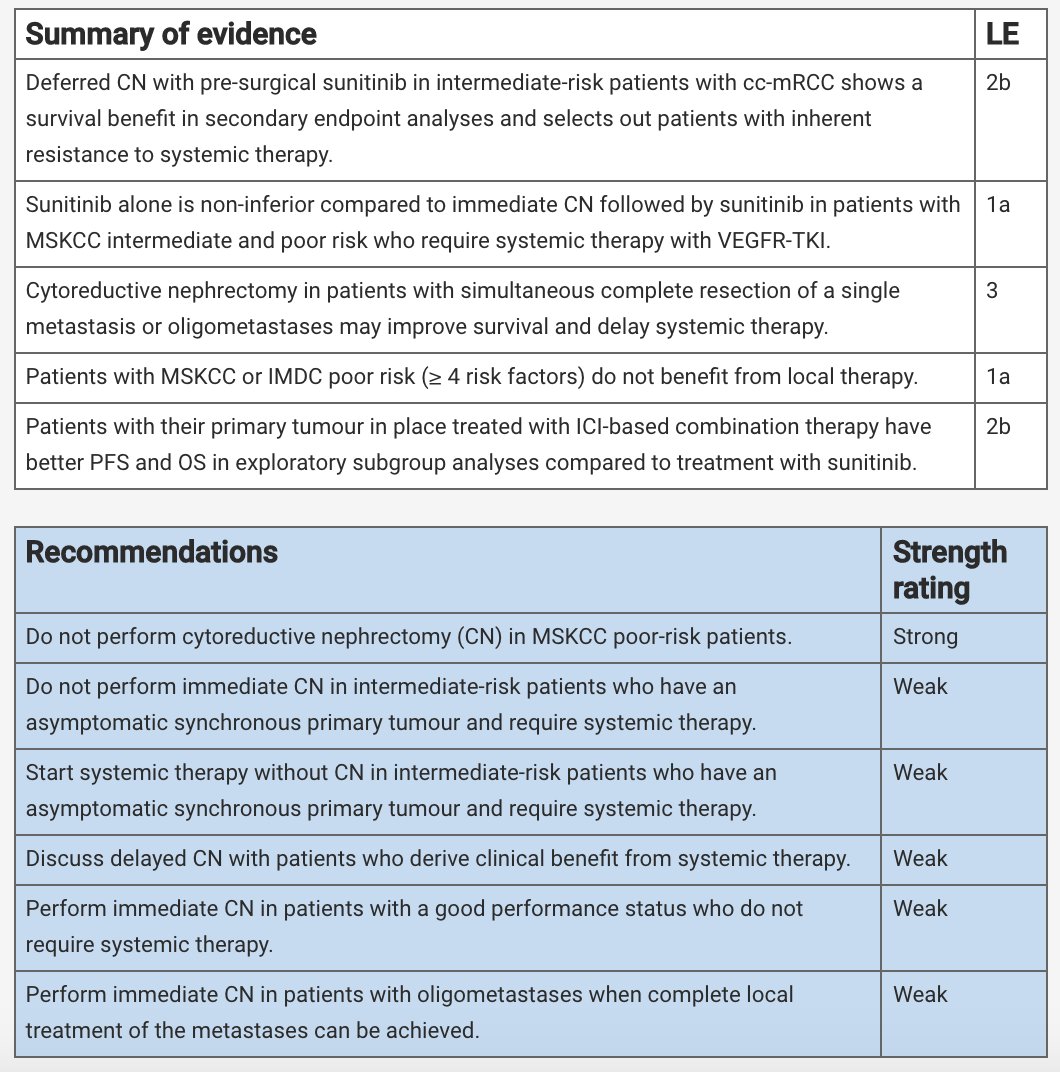 Dr. Lu concluded his presentation with the following take-home messages: