Dr. Dall’Era began with an overview of pathways involved in DNA damage repair pathways, including nucleotide excision repair, DNA mismatch repair, and DNA strand break repair. Among the most important of these is homologous recombination repair, with commonly involved genes including BRCA1 and BRCA2.

Dr. Dall’Era highlighted that these data are important and germline mutations have implications for both screening and treatment on the basis of an increased risk of prostate cancer and an increased risk of advanced or aggressive disease. Further, both germline and somatic mutations may allow for the identification of patients suitable for targeted treatment approaches.

He then discussed the PROREPAIR-B study assessing germline DNA damage repair (DDR) mutations in men with mCRPC, demonstrating that men with BRCA2 had worse survival compared to the remainder of the 107 genes important in DNA repair. Notably, assessing treatment response, they demonstrated that patients with BRCA2 mutations did worse when treated with taxanes, as compared to androgen axis targeting agents.

Dr. Dall’Era then transitioned to a discussion of PARP inhibitors. These agents trap the PARP on single-stranded breaks allowing for the development of double-stranded breaks. In cells with intact homologous recombination repair mechanisms, these are repaired. In cells with homologous recombination repair defect (e.g. BRCA mutations), DNA damage accumulates and leads to cellular death. 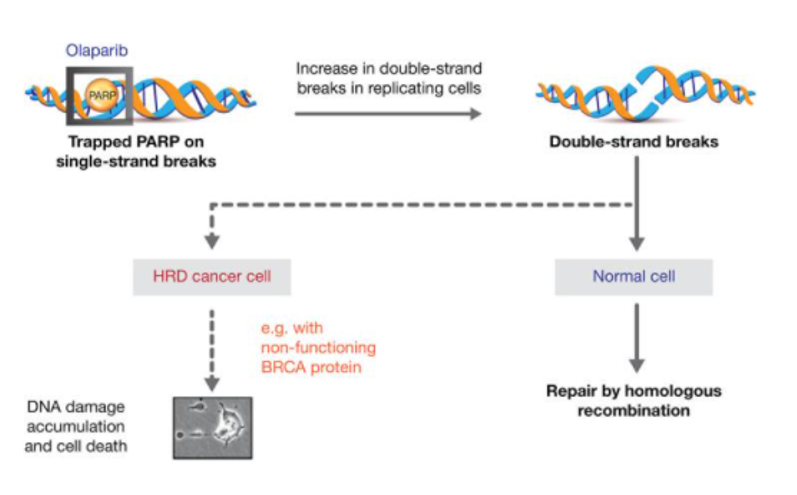 Dr. Dall’Era then discussed the Phase II TOPARP-A trial which demonstrated a benefit (both in radiographic progression-free survival and overall survival) to the PARP inhibitor olaparib in men with homologous recombination repair defects. Notably, responders most commonly had BRCA1, BRCA2, and ATM, though others were also noted.

He then transitioned to a discussion of the PROfound trial, a randomized Phase III trial of olaparib or androgen axis inhibitor switch among patients with mCRPC who progressed following treatment with abiraterone or enzalutamide. Patients were stratified on the basis of their eligible genetic alterations. While this trial was designed to primarily assess radiographic progression-free survival, recent data have assessed overall survival. This demonstrated improved overall survival among patients with BRCA1, 2, or ATM mutations for those receiving olaparib, whether accounting for cross-over or not. Reviewing adverse events, he highlighted that this approach was relatively well tolerated.

The TRITON2 trial, a Phase II trial of rucaparib, has similarly shown promise for this PARP inhibitor in advanced prostate cancer. The Phase III randomized TRITON3 trial is currently enrolling. The potential for synergistic combinations of PARP inhibitors and androgen axis targeting agents is an area of ongoing assessment.