(UroToday.com) The Société Internationale d'Urologie (SIU) 2020 Virtual Annual Congress featured a session on the utility of lymphadenectomy in urologic cancer, including a discussion of the pros and cons of lymphadenectomy in prostate cancer by Dr. Alberto Briganti from the San Raffaele Scientific Institute in Milan, Italy.

Dr. Briganti notes that the optimal extent of a pelvic lymph node dissection includes extending the dissection along common iliac vessels at least up to the ureteric crossing. With this approach, 75% of all lymph nodes potentially harboring lymph node invasion can be removed:2 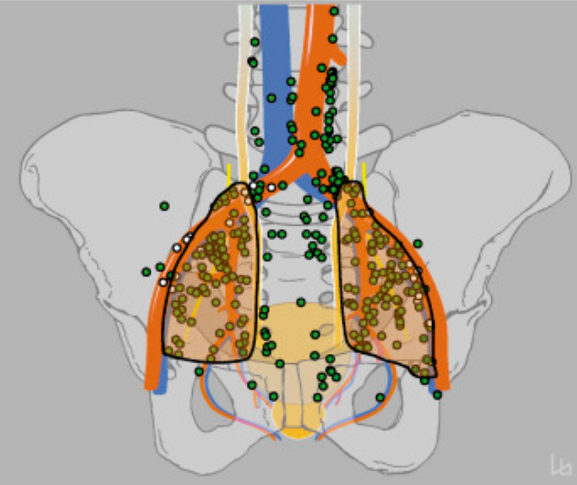 Dr. Briganti notes that there may be a subset of patients that may also benefit from staging from a super-extended pelvic lymph node dissection. Among 471 patients with high-risk prostate cancer treated with radical prostatectomy (RP) and a super-extended pelvic lymph node dissection (PLND) that included the removal of the pre-sacral and common iliac nodes, the median preoperative LNI risk was 25.5% with a median number of nodes removed of 23 – lymph node invasion was noted in 36.3% of patients.3 The adoption of a 30% threshold would result in avoiding the removal of the common iliac and pre-sacral nodes in >60% cases, with a risk of missing LNI in these regions of <5%. However, there is no data on the impact of such an extensive approach on cancer control.

The main pros of pelvic lymph node dissection are as follows:

According to Dr. Briganti, the following are cons with regards to pelvic lymph node dissection for prostate cancer:

Dr. Briganti concluded with the following take-home messages from his talk on lymphadenectomy in prostate cancer: