(UroToday.com) In the World Urological Oncology Federation (WUOF) Symposium held in conjunction with this year’s virtual Société Internationale d'Urologie (SIU) annual congress, Dr. Sigrid Carlsson presented a lecture examining whether mpMRI of the prostate should be the “male mammogram”.

To begin, Dr. Carlsson highlighted that, in spite of some controversy, PSA based prostate cancer screening should be considered a success story. In particularly, she highlighted modelling based analyses of both the European and American screening trials demonstrating comparable evidence that PSA-screening reduces prostate cancer mortality by 30%. Further, based on other, more recent, modelling studies, the balance of benefits and harms of PSA screening are likely much more favourable than generally appreciated. Particularly, over a long-term follow-up, numbers needed to screen and diagnose to reduce prostate cancer death diminish.

As most will be well aware, rates of prostate cancer specific death declined from the mid-1990s through the early 2010s. However, in more recent years, there has been a stabilization in prostate cancer mortality and an increase in rates of diagnosis of distant disease at presentation. She postulated that this is related to declines in PSA testing.

Although these are these identified benefits to prostate cancer screening using PSA testing, Dr. Carlsson highlighted problems that are likely apparent to most UroToday readers – first, significant overdiagnosis. However, active surveillance can mitigate much overdiagnosis and is safe over a long term follow-up with many men being able to avoid treatment entirely.

Given this tension between benefits and harms, Dr. Carlsson considered a variety of further tests which could be utilized to better characterise a man’s risk of prostate cancer, including nomograms, imaging, and biomarkers. Highlighting the most recent EAU-EANM-ESTRO-ESUR-SIOG guidelines for the risk assessment of men, Dr. Carlsson emphasized that additional testing is warranted for patients with elevated PSA between 2-10ng/mL prior to biopsy including a risk calculator (strong recommendation), imaging (strong recommendation), or urinary serum biomarkers (weak recommendation). The NCCN recommendations are somewhat less strongly phrased but suggest “consideration” of these approaches.

The first, and easiest, step in the evaluation of a man with elevated PSA is to repeat the PSA. Drawing on data from Dr. Eastham and colleagues, she emphasized that a highlight proportion (in excess of 40%) of men with “abnormal PSA” will have normalization on a repeat test.

Nomograms (including the PCPT risk calculator and others) may offer the ability to better guide a man when deciding on biopsy. The NCCN 2020 guidelines recommend consideration of reflex biomarkers including, free PSA, Prostate Health Index (PHI), Select MDx, 4Kscore, or ExoDx Prostate Test (EPI).

However, the most recent AUA position statement from 2020 recommends imaging with magnetic resonance imaging (MRI) prior to prostate biopsy in all men without a prior prostate biopsy. However, the panel recommended against even earlier use of MRI, concluding that “the evidence is insufficient to recommend MRI for screening”. The rationale for this is, based on the PRECISION trial results, that we should not biopsy patients with low risk findings (PIRADS1-2) and only perform targeted biopsy in those with suspicious MRI findings (PIRADS3-5) in order to increase the diagnostic yield of clinically significant disease while reducing overdiagnosis of clinically insignificant disease.

The 2020 EAU -EANM-ESTRO-ESUR-SIOG guidelines provide similar recommendations, suggesting against the use of MRI as an initial screening test but supporting its use prior to initial prostate biopsy with omission of biopsy in men with reassuring MRI findings. However, Dr. Carlsson highlighted that the data underpinning these guideline recommendations regarding the use of MRI prior to prostate biopsy is based on published studies from specialized centers of excellence. Given the subjectivity of imaging assessment, she highlighted that the utility of this approach depends on the expertise of the interpreting radiologist.

In particular, expert radiologists are more likely to interpret a prostate MRI as negative and the negative predictive value of their assessment is higher. Thus, there is a resulting less overcalling of MRI images and fewer biopsies. When utilized outside high-volume centers, MRI has a moderate detection rate, thus, Dr. Carlsson suggested that it may not be advisable to omit biopsy in men with negative MRIs in this setting.

In summary, Dr. Carlsson emphasized that the use of MRI and targeted biopsy improves the detection of significant prostate cancer, decreases the number of unnecessary biopsies, and reduces overdiagnosis. However, a negative MRI may not be sufficient to exclude significant cancer. In a systematic review, suggested false negative rate is 9%, though there is significant heterogeneity between studies.

She then considered the interpretation of MRI findings in light of PSA density. Data suggest that PSA density <0.15 may allow avoidance of prostate biopsy in men with PIRADS3 lesions with a relatively low miss rate (6%, 95% confidence interval 2-15%).

Dr. Carlsson emphasized that realizing the benefit of pre-biopsy MRI requires access to high-quality MRI images, a proficient radiology team for interpretation, and high-quality fusion biopsy approaches. Moving forward, she suggested that the combined use of imaging and biomarkers may allow for a more personalized approach to evaluation of prostate cancer risk.

For example, use of Stockholm3 and MRI in combination can reduce biopsies performed and overdiagnosis while missing very few significant cancers.

She closed by examining a number of ongoing trial assessing different approaches to prostate cancer screening including adaptation of PSA, other biomarkers, and MRI. 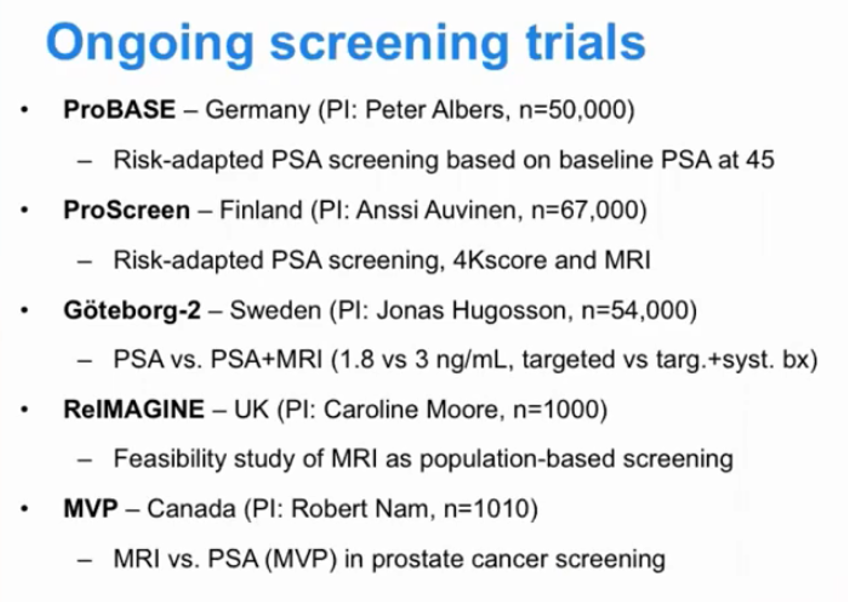 With respect to her initial question, Dr. Carlsson concluded that MRI is not yet ready to be used as a male mammogram but is, instead,