Dr. Hamilton began with a review of the history of robotic surgery. Unlike the common uses today, the initial goal of robotic surgery came from the armed forces and battlefield uses in which the goal was to keep surgeons out of harms way through a “remote surgical approach”.

While robotic prostatectomy was adopted early and was, initially, the most frequent utilization of this approach, gynecologic and now colorectal and other general surgical approaches have far outpaced urologic utilization of the robotic platform according to data from Intuitive Surgical.

Thus, ongoing innovations may be focused on the utilization in other specialties.

Beginning as a theoretical framework, Dr. Hamilton suggested that a robotic approach could, in theory, offer less blood loss, shorter length of stay, faster recovery, better cosmesis, and less pain at the potential expense of increased cost and operative time with questionable differences in oncologic efficacy. In general, for most of these outcomes, there is a lack of high quality data.

Dr. Hamilton then moved to an assessment of the evidence base for robotic surgery in the four most common urologic applications, beginning with radical prostatectomy. The relevant comparator here is open surgery given the relative scarcity of laparoscopic prostatectomy. Apart from actual comparative data, the widespread use of the robotic approach (in excess of 80% of all radical prostatectomies globally) means that the cat is likely out of the bag. In terms of non-randomized data, the evidence is fairly unanimous in support of a robotic approach. 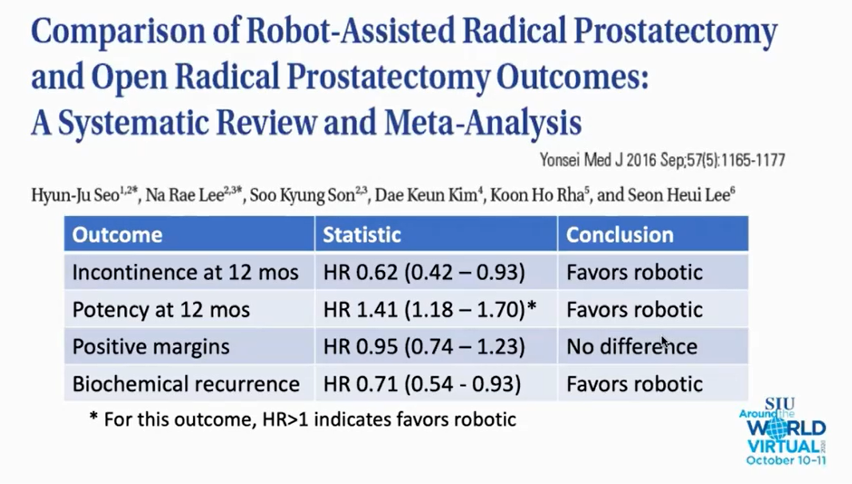 However, in the only available randomized trial, outcomes were similar. The strength of the conclusions from this trial is limited given that only two surgeons were involved and outcomes were assessed early.

In the context of radical cystectomy, there is much more and higher quality evidence comparing this approach to open surgery. Further, robotics may be particularly beneficial given this long and potentially morbid surgery. A recent systematic review of the five available randomized controlled trials highlighted that the surgical approach (open or robotic) did not have a meaningful effect on oncologic, safety, or quality of life metrics in spite of the decreased need for transfusion and earlier hospital discharge.

In the context of partial nephrectomy, there are two relevant comparators, both open and laparoscopic surgery, which are commonly clinically utilized. Here, the case for minimally invasive approaches to avoid a flank incision are perhaps stronger than the rationale for prostatectomy or cystectomy. However, the data here is worse in quality with no randomized trials and relatively poor quality retrospective series. A planned randomized controlled trial of open versus robotic partial nephrectomy was unsuccessful due to an inability to fund on the premise that “robotic partial is better”. However, other centers are having somewhat more success with the ROBOCOP and OpeRa studies in Germany set to complete in 2021 and 2022, respectively.

Finally, in the context of retroperitoneal lymph node dissection, there is a strong rationale due to the ability to avoid the significant midline laparotomy. Here, the data are very immature with, as Dr. Hamilton highlights, a signal towards lower blood loss. However, oncologic outcomes are not yet able to be assessed.

In summary, thus far, Dr. Hamilton highlighted that there is widespread use of robotic approaches and that the abundant lower quality evidence supports robotic surgery while the more sparse higher-quality evidence is less supportive. In a cost-neutral or cost-agnostic environment, dissemination would be widespread. However, Dr. Hamilton highlighted that innovation costs money with the open question of whether the costs are worth the apparent benefits.

Assessing cost-effectiveness, Dr. Hamilton laid out a number of issues with these analyses include varying methodologies, assessment of true costs (the comparator, capital costs, degree of utilization within an institution, case volumes), and from what cost perspective the analysis is being performed. Given this variation in approach, it is therefore not surprising that there are a variety of different conclusions regarding the cost-effectiveness of robotic surgery, taking for example, robotic radical prostatectomy.

Envisioning the future of robotic surgery, Dr. Hamilton highlighted that the goal is a cheaper platform utilizing fewer/smaller incisions and incorporating haptic feedback and components of artificial intelligence. Currently, there are 4 US Food and Drug Administration approved approaches and there are 7 multi-port and 2 single-port systems in the pipeline.

In conclusion, the apparent benefit of robotic approaches depends on the perspective (surgeon, patient, or research methodologist). Thus, the question remains whether the benefits where present are worth the costs. Dr. Hamilton suggested that we need to embrace innovation and accept higher costs currently while designing studies to generate higher-quality evidence.