(UroToday.com) In the Controversies in the Management of Kidney Cancer session of this year’s virtual Société Internationale d'Urologie (SIU) annual congress, Dr. Axel Bex and Dr. Jose Karam debated the role of cytoreductive nephrectomy with kidney cancer, taking the con and pro sides of this argument, respectively. Dr. Bex began by emphasizing that such a debate format forces a somewhat polarized perspective on the data and, despite his assigned position, he believes there is a subset of patients for whom cytoreductive nephrectomy is beneficial.

Highlighting a study from De Bruijn and colleagues, he demonstrated data showing that some patients are able to undergo observation following cytoreductive nephrectomy without complete metastasis resection with reasonable time to progression. Those patients with a short time to progression had higher IMDC risk categories and higher Fuhrman grade. Thus, patients with low volume disease may be suitable for cytoreductive surgery followed by observation. However, addressing the broader question and particularly among patients for whom systemic therapy is required, he emphasized data from both the CARMENA and SURTIME trials favor an approach that de-emphasizes resection.

Examining the outcome of each of these studies and focusing on overall survival, patients who received sunitinib primarily (either as their only intended approach or as the initial treatment approach prior to planned nephrectomy) had as good or better results than those with planned upfront cytoreductive nephrectomy.

He hypothesized that differences between the two studies may be driven by the better risk characteristics of the patients enrolled in the SURTIME trial.

Ongoing follow-up of the CARMENA trial which has been presented but not yet published showed much more similar results to that demonstrated in SURTIME with longer survival seen for patients receiving sunitinib alone among patients with intermediate-risk disease by MSKCC/IMDC criteria. Indeed, both the relative and absolute survival was seen in this post-hoc analysis of patients with intermediate-risk disease are very similar between the two studies. 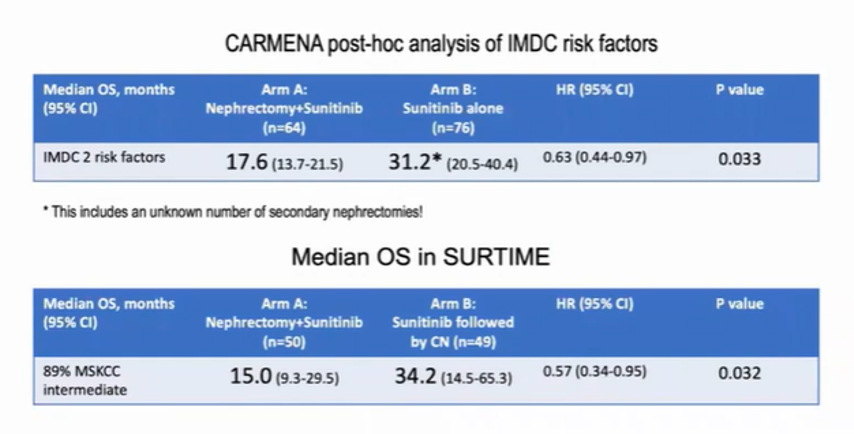 Dr. Bex then moved to explore potential explanations for these findings. One of the most prominent is the differential use of systemic therapy: among patients who receive upfront surgery, fewer patients receive systemic therapy and, when administered, it is given later in the disease process and for a shorter time. In contrast, starting with systemic therapy allows for earlier and more profound control of the disease with subsequent selection of individuals with good response prior to planned cytoreductive nephrectomy.

Another argument supporting the use of systemic therapy depends on the concept of the punctuated evolution model of disease progression. These patients often have relatively small primary tumors with a higher metastatic burden.

As a result of the data he just summarized, Dr. Bex highlighted that guidelines now state that cytoreductive nephrectomy should no longer be considered the standard of care for patients with intermediate and poor-risk disease with asymptomatic primary tumors when systemic therapy is needed. However, secondary surgery remains a consideration on the basis of symptomatic tumors or near-complete responses to systemic therapy.

Dr. Bex then highlighted that recent recommendations for systemic therapy have evolved, including the use of combined immune checkpoint inhibitor therapies, differing from the systemic therapy used in CARMENA and SURTIME. However, he considered that we should continue with an approach to prioritizing initial systemic therapy. Dr. Bex highlighted data for patients with primary tumors in situ receiving nivolumab and ipilimumab which demonstrated that primary tumor response was associated with response at the metastatic sites as well, acting as a “litmus test” for treatment efficacy.

In conclusion, Dr. Bex highlighted that patients with mRCC requiring systemic therapy should preferentially receive immune checkpoint inhibitor combination therapies, in analogy to CARMENA and SURTIME approaches acknowledging the evolving treatment landscape. In the era of IO, there are no available randomized data assessing deferred cytoreductive nephrectomy through trials are planned and this approach may be considered for subsets of patients who may benefit.

Read the Opposing Argument: SIU Virtual Congress 2020: Debate: Is There Still a Role for Cytoreductive Nephrectomy in the Management of Kidney Cancer? For