(UroToday.com) In the Plenary 03 session at the Société Internationale d'Urologie (SIU) 2020 Virtual Annual Congress, Dr. María Ribal presented the State of the Art Lecture on gender issues in urology.

Dr. Ribal began by highlight that, in spite of some advances in the Western world, we continue to live in a patriarchal society with significant gender disparities across most Western nations. Current estimates suggest that it will take nearly a century to close the existing gender gap in most Western nations. She then discussed the #MeToo cultural phenomenon which highlighted the prevalence of sexual harassment and assault.

Moving from issues at the societal level to specifically evaluate medicine, surgery, and academic, Dr. Ribal highlighted a recent commentary in The Lancet highlighting the importance of gender equity not just from a perspective of justice and rights, but in terms of clinical outcomes and health care delivery. This emphasizes that the fight for gender equality as an issue that should be critical for everyone, women, men, and even medical journals to address. 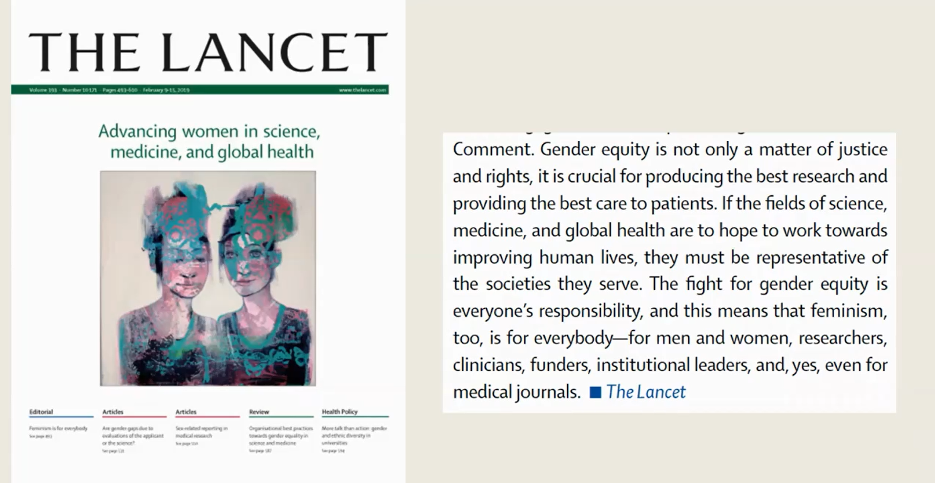 She then highlighted recent data demonstrating that the existing large pay gap between men and women in medicine is not just present but getting worse. Further, other prevalent issues in society are similarly problematic within medicine. Dr. Ribal then highlighted a number of recent publications including primary analyses, systematic reviews, and perspective pieces examining the issues of discrimination, harassment (including sexual harassment), and abuse within medicine. These issues are, not surprisingly, more commonly experienced by women. Across a variety of academic fields, rates of sexual harassment were highest among female students in medicine. Beyond the overt, Dr. Ribal highlighted many other potentially more insidious ways in which surgical culture may harm women including training-related issues, a lack of diversity in leadership positions, a lack of mentorship, inequalities in pay, and research funding, and inadequate pregnancy leave policies. 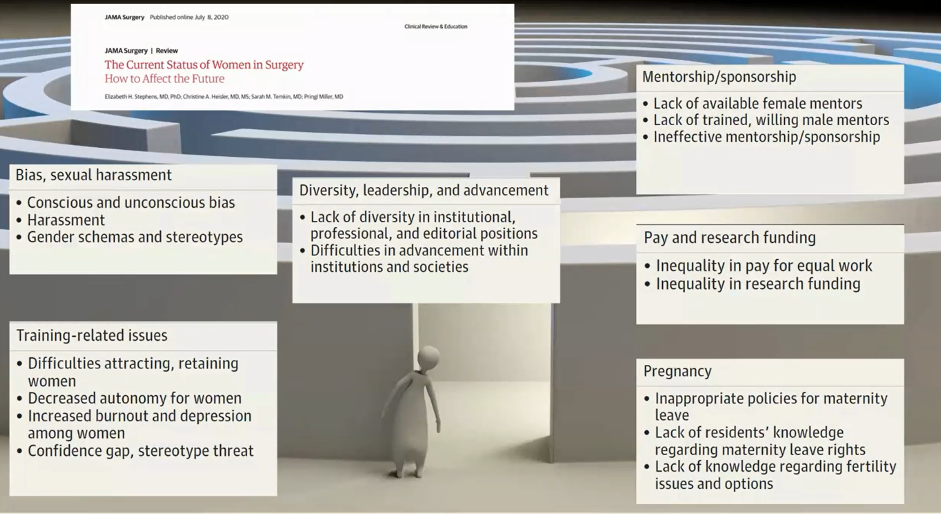 In academic medicine, Dr. Ribal highlighted that relatively few women are able to ascend to top leadership positions, despite many women in the “pipeline”. A recent Association of American Medical Colleges (AAMC) report highlighted that surgical fields have among the poorest representation of women in leadership. However, Dr. Ribal highlighted that it is not just leadership positions where women are under-represented: in conference speaking roles, the overwhelming majority of speakers are male, including high rates of all-male panels. Fourty-three percent of conferences lacked even a single female speaker in plenary sessions. This lack of representation, Dr. Ribal pointed out, may have important implications for future generations of women. Recently, the Director of the NIH (Francis Collins) suggested it was “Time to End the Manel Tradition”.

Dr. Ribal then shifted her focus specifically on urology. Unfortunately, the data are particularly bleak in our field: urology has the lowest proportion of women of any surgical specialty with a recent European Association of Urology (EAU) report noting that only 13% of members were women. Current estimates suggest that it will take 56 years to reach levels of female representation in urology residencies consistent with the overall trainee population and 71 years to reach that of the overall US population. 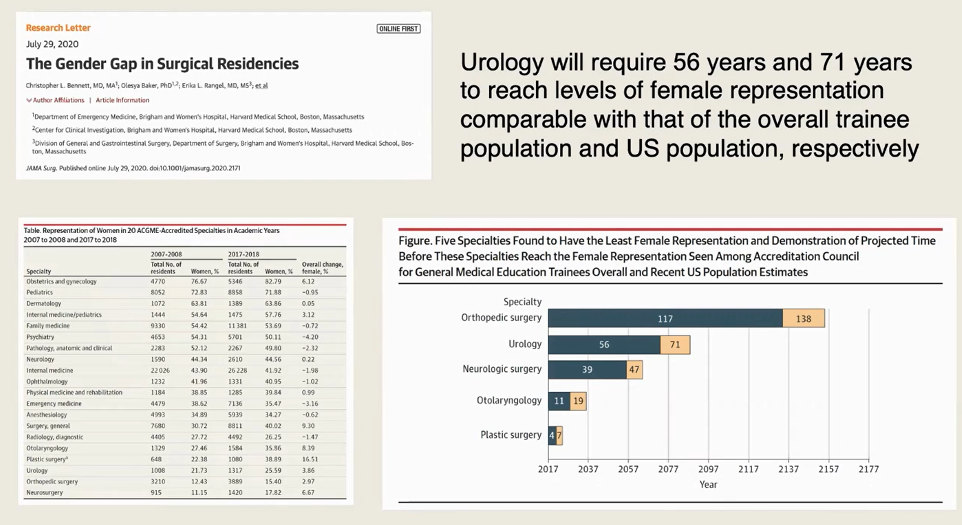 This situation is even more dire among departmental chairs with a recent analysis identifying only 4% of chairs who are women.

In closing, Dr. Ribal examined some solutions, highlighting the role of societies such as the Society for Women in Urology (SWIU). She emphasizes that while these organizations can be important venues, she wants to avoid “academic ghettos”, separated from the remainder of the community. The overall goal ought to be inclusive groups. She highlighted other ways to close the gap, included examples from Dr. Rena Malik such as increased compensation, increased representation at course instructors and directors, increased representation in specialty societies boards, and promotion of junior and midcareer female faculty in academic medical centers. However, more generally, we need evidence-based policy changes to address widespread barriers at many levels.

Dr. Ribal emphasized that female leaders offer particular strengths including, in general, a collaborative, empathic, and compassionate leadership approach, a transformational rather than transactional approach, and a flatter hierarchy with greater engagement. Dr. Ribal highlighted her ongoing work with the congress, Surgery in the 3rd Millennium, focusing on awareness both within and beyond our specialty.

She highlighted that the principle of meritocracy is a myth, without empiric evidence to support it in current medical culture. Thus, promoting diversity in no way contravenes meritocracy – in fact, it may do just the opposite as available data suggest that a signal of female gender leads to devaluation.

Based on previous work, she offered five solutions for achieving gender equality in medicine. 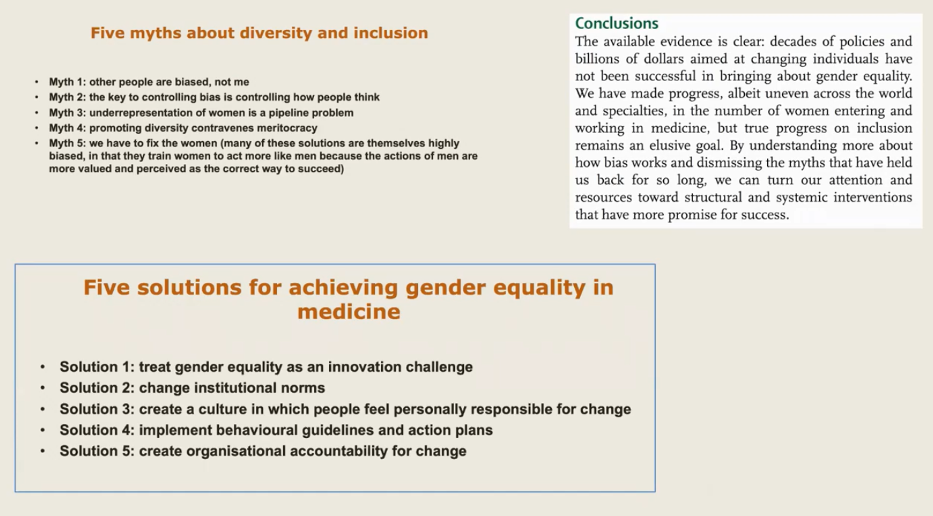 However, this is an issue beyond medicine and we should use our platform as doctors in our communities to advocate for the advancement of women in our society.