Athens, Greece (UroToday.com) In his presentation, Dr. Laurence Klotz discussed the recent development in imaging prior to a prostate biopsy.

The PROMIS study was a landmark trial showing the superior accuracy of MRI compared to transrectal biopsy (TRUS-Bx) alone1. A total of 576 men underwent 1.5 Tesla MRI with systematic and template mapping biopsy. A total of 40% had clinically significant prostate cancer. This showed that MRI had a negative predictive value (NPV) and sensitivity of 76% and 88%, respectively1.

Since then, there have been many additional studies assessing the effectiveness of MRI in detecting and ruling out clinically significant cancer (Table 1), with an NPV ranging from 79-100%. There have also been a few randomized controlled studies comparing systematic biopsies and MRI targeted biopsies, showing an advantage to the targeted biopsies (Table 2).

Table 1 – Many studies attempting to assess the role of MRI in the detection and ruling out clinically significant disease: 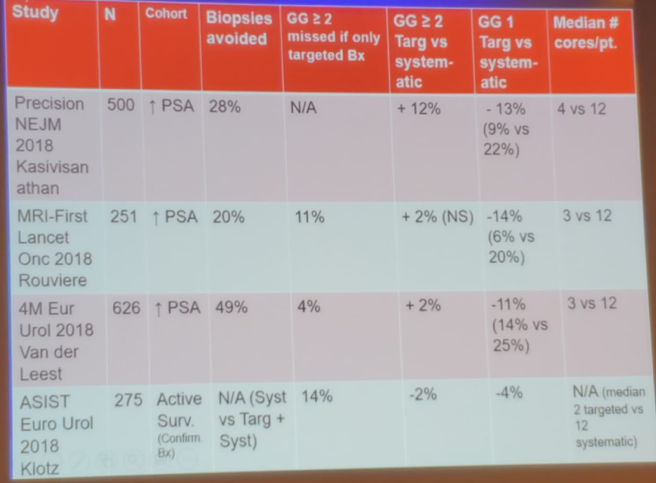 The NPV of the MRI is a function of the underlying risk. For a 30% risk of prostate cancer, the NPV is 88%, while for 60% risk, the NPV is 67%. In the landmark randomized prospective controlled study, the PRECISION study, the MRI informed targeted biopsy diagnosed 38% clinically significant cancer compared to only 26% by the systematic biopsies2. Figure 1 summarizes the percentage of clinically significant, clinically insignificant, and no cancer stratified by PI-RADS 2 MRI findings in the PRECISION trial.

Figure 1 – Rates of cancer and no cancer in the PRECISION trial: 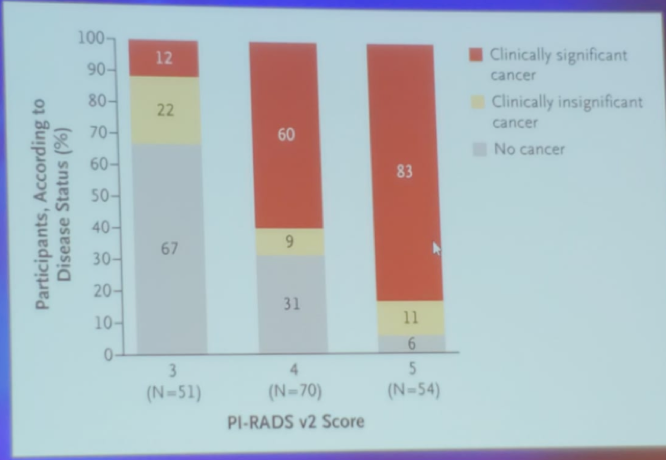 In the recently published ASSIST trial3 led by Dr. Klotz, all undiagnosed or untreated patients had an MRI at 2 years. The upgrading rate to GG2 or above was 27% in the systematic biopsy and 13% in the MRI + systematic biopsy arm (HR 0.62, p=0.056). Dr. Klotz concluded in this trial, that despite seeing no difference in upgrading at the initial biopsy, patients on the MRI arm had a lower risk of subsequent upgrading3.

According to Dr. Klotz, there is no doubt that MRI and targeted biopsies confer an improvement in the diagnosis rate of clinically significant prostate cancer when compared to systematic biopsies. However, the NPV for MRI has been shown to be lower than originally had been hoped for (around 85%).

The general consensus that is being developed, is that if the risk of high-grade cancer is lower than 10%, it might be safe to omit systematic biopsies, otherwise, they are necessary. In men with elevated PSA – deciding what is the correct next step – MRI or biomarker, is largely a function of resources /cost/availability/patient preference.

Dr. Klotz also discussed the ideal number of cores that need to be taken per each target. It would seem that the magic number is 3 cores per target4.

Additional concerns about relying on MRI and only targeted biopsy:

Dr. Klotz concluded his talk stating the main limitations of MRI. These include its lack of real-time interaction, the requirement of a radiologist, risk of not capturing small satellite lesion, and underestimation of the lesion volume. Additional limitations include the cost, complexity of MRI, and the associated patient anxiety. This leads us to ask whether there are any alternatives to MRI?

One of the more interesting and currently available alternatives to MRI is the high-resolution Micro-Ultrasound. It uses Exact 29 MHz, compared to the conventional ultrasound, which uses 6-9 MHZ. The resolution is also improved with 70 microns. It has a similar footprint and cost as conventional ultrasound, with a short learning curve. It uses the prostate risk identification using micro-ultrasound (PRIMUS) protocol, which is like the PIRADS protocol (Figure 2). It has been shown to have comparable sensitivity of MRI and many publications assessing its utility will be coming out in the near future. 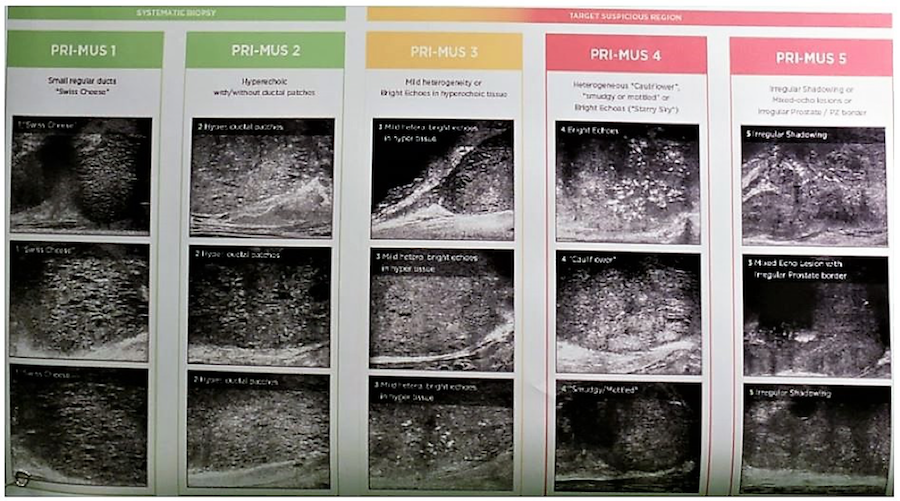