Athens, Greece (UroToday.com) Dr. Kelly Stratton gave an overview of the role of surgery in advanced prostate cancer. Advanced prostate cancer is a growing concern with the non-organed confined disease at prostatectomy becoming more prevalent.1 According to the EAU guidelines locally advanced disease is a disease manifesting with any PSA, and Gleason score, clinical stage T3-T4 or clinically positive nodes, or metastatic disease.

The EAU guidelines recommend radical prostatectomy in these high-risk patients but only in highly selected patients with locally advanced disease, and only as part of multimodal therapy. In these patients extended pelvic lymph node dissection should be performed.

Dr. Stratton moved on to describe the late-breaking abstract CALGB 90203 (Alliance): Radical prostatectomy with or without neoadjuvant chemohormonal therapy in men with clinically localized high-risk prostate cancer. This was presented at the AUA in 2019 by Dr. Eastham from Memorial Sloan Kettering Cancer Center. This was a phase 3 study assessing men with locally advanced disease and randomizing them 1:1 to either radical prostatectomy or neoadjuvant ADT + docetaxel *6 + surgery. The primary objective was 3-year biochemical progression-free survival, defined as PSA >0.2 ng/ml on 2 separate occasions. The pathological features of both study groups are shown in table 1, and the final results are shown in Table 2. 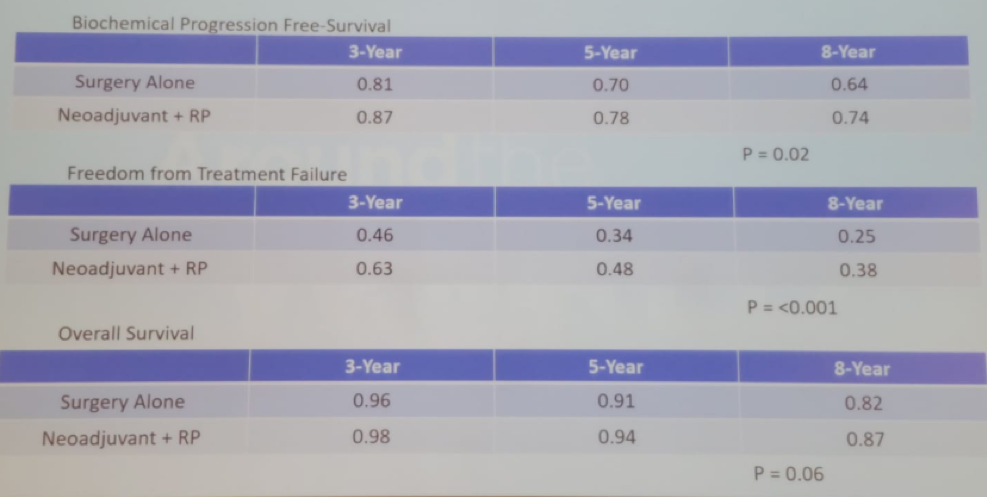 The next study Dr. Stratton described was the RADICALS trial (Figure 1), recently presented at ESMO 2019, in Barcelona, comparing adjuvant to salvage radiotherapy following radical prostatectomy. This trial included close to 1,400 patients and treated between 2007 and 2016. This trial showed no difference in the biochemical progression-free survival at 5 years in the adjuvant and salvage arms (85% vs. 88%, HR 1.1, p=0.56). 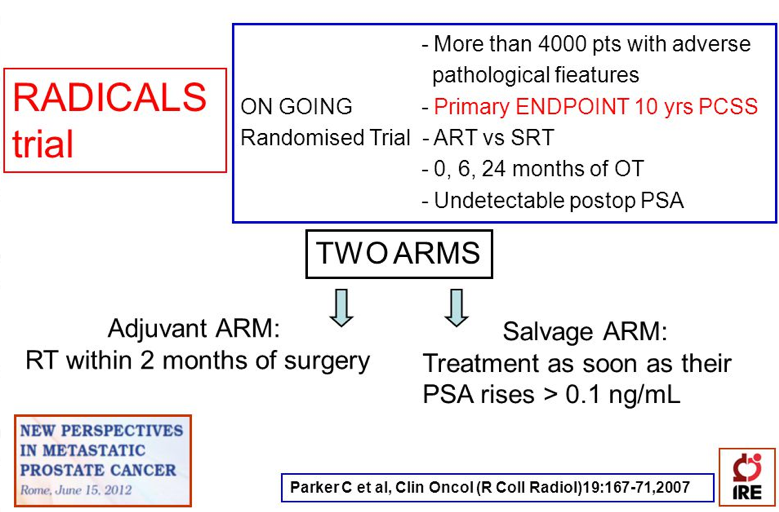 There is clearly a shifting paradigm, with data showing that neoadjuvant therapy works. Moreover, radical prostatectomy can be performed with good results in these patients and radiotherapy can be added when needed. These lead to a situation where we can give ADT only when really necessary, and local control being able to prevent late complications.

The last topic discussed was the treatment of the primary tumor in the metastatic setting. Two prospective radiotherapy trials have been published: the HORRAD3 trial which did not show any overall survival benefit with radiotherapy to the primary tumor, and STAMPEDE,4 which showed an overall survival advantage in patients with low-volume metastatic disease. As a result, radiotherapy to the primary tumor in the metastatic setting has now been incorporated in the guidelines. However, it is still not clear if this benefit can be extrapolated to radical prostatectomy. Some retrospective data have shown a benefit to radical prostatectomy in this setting,5 with a 5-year overall survival advantage (55% with surgery compared to 21% without surgery). However, this is retrospective data with its inherent selection bias, and therefore, there are currently several ongoing prospective trials trying to answer this question, including the SWOG 1802, g-RAMPP, and Trombone. Hopefully, in the near future, we will have an answer to this burning question.