This website uses cookies to ensure you get the best experience on our website. Privacy Policy
(UroToday.com) The prostate cancer session at the Southeastern Section of the AUA 2021 virtual meeting included a presentation by Dr. Dipen Parekh discussing genetics and markers for patients with prostate cancer.

Dr. Parekh started by presenting a case of a 67-year-old male with a PSA of 5.7 ng/mL, past medical history of hypertension and diabetes, with a SHIM of 25 and a desire to preserve sexual function. He subsequently underwent a prostate biopsy that showed two cores of Gleason Grade Group 1 and two cores of Gleason Grade Group 2 (one core 10% pattern 4, one core 5% pattern 4). Thus, based on his favorable intermediate risk disease, based on the NCCN guidelines he would be a candidate for active surveillance. 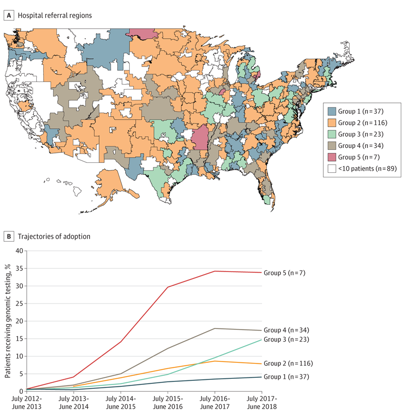 Based on work from Cooperberg et al. 2 assessing the diverse genomic landscape of 408 men with clinically low-risk prostate cancer, unsupervised clustering analysis of the hallmark gene set scores revealed three clusters, which were enriched for PAM50 luminal A, luminal B, and basal subtypes. Average genomic risk (based on 18 published prognostic signatures), but not the clusters, was associated with both pathological (OR 1.34, 95% CI 1.14-1.58) and biochemical outcomes (HR 1.53, 95% CI 1.19-1.93).

According to Dr. Parekh, there are several important questions with regards to biomarkers in prostate cancer:

With regards to whether we should be using tissue based markers, Dr. Parekh highlights that there is evidence from the breast cancer literature with six specific assays. Impressively, “Adjuvant Chemotherapy Guided by a 21-Gene Expression Assay in Breast Cancer” was published in the New England Journal of Medicine in 2018. As such, the breast cancer landscape is significantly further ahead than for prostate cancer which is essentially based on retrospective analyses. Lin et al.3 evaluated the 17-gene Oncotype DX GPS as a predictor of outcomes in 432 patients on active surveillance. There were 101 men that underwent radical prostatectomy after a median 2.1 years of surveillance, with 52 having adverse pathology. A total of 167 men (39%) upgraded at a subsequent biopsy. GPS was significantly associated with adverse pathology when adjusted for diagnostic Gleason Grade (HR/5 GPS units, 1.18; 95% CI 1.04-1.44, p = 0.030), but not when also adjusted for PSA density (HR, 1.85; 95% CI, 0.99 to 4.19; p = 0.066). Dr. Parekh notes that the Genomics in Michigan to Adjust Outcomes of Prostate Cancer (G-MAJOR) for men with newly diagnosed favorable risk prostate cancer trial is currently accruing patients and will hopefully have a readout of results in the next 5 years.

Without question, there is tumor heterogeneity among patients with low risk prostate cancer. Wei and colleagues previously assessed the impact of genomic and transcriptomic diversity within and among intraprostatic prostate cancer foci on prostate cancer molecular taxonomy, predictors of progression, and actionable therapeutic targets. They found that there was considerable variability in genomic alterations among prostate cancer cores, and between RNA- and DNA-based platforms. Furthermore, heterogeneity was found in a molecular grouping of individual prostate cancer foci and the activity of gene sets underlying the assays for risk stratification and androgen receptor activity. 4

Dr. Parekh concluded by noting that currently when we need to get a genomic test, it still remains unclear which test we should get.