This website uses cookies to ensure you get the best experience on our website. Privacy Policy
(UroToday.com) The Southeastern Section of the AUA 2021 virtual meeting include a prostate cancer workup and staging session and a presentation from Dr. Kristen Scarpato discussing the current best practice for prostate biopsy in 2021.

The goals of prostate biopsy are two-fold in that it is important to detect clinically significant cancer and to ensure patient safety (do no harm). Prostate cancer detection includes screening (PSA, DRE à TRUS biopsy) and specifically selective screening based on patient age, race, family history, and shared decision making; augmented screening may include biomarkers or utilization of mpMRI. Judicious screening and detection is important given that we want to detect clinically significant prostate cancer and that prostate cancer is the second leading cause of cancer death in US men. Second, there are more than 1 million biopsies per year, and biopsy harms include overdetection, overtreatment and increasing infection rates. Specifically, there is increasing fluoroquinolone resistance (~25% of men undergoing biopsy) and infectious complications may include urinary tract infection, epididymitis, orchitis, prostatitis and sepsis. Standard TRUS biopsy is the most common modality for performing a prostate biopsy (95% of prostate biopsies). TRUS allows the urologist to visualize the contour of the prostate, however lesions are not well visualized, and biopsies via the TRUS approach are undersampled and randomly taken.

Multiparametric MRI is a useful screening tool and useful at multiple points in the evaluation of prostate cancer, providing excellent anatomic detail. Multiple sequences are obtained for a multiparametric MRI, including T1- and T2-weighted images, diffusion-weighted imagines, and dynamic contrast-enhanced images. Targeted biopsies are based on multiparametric MRI findings and are either performed in-bore, cognitively, or by MRI-US fusion biopsy: 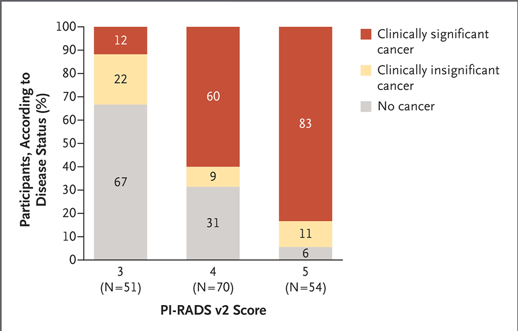 Transperineal biopsy has gained interest over the last several years, based on lower complication rates, local anesthesia, access to the entire gland (anterior), and no compromise in cancer detection rates. However, there is a significant learning curve, even with anesthesia patients may still be in pain, and there is significant time required to perform the procedure.

Dr. Scarpato concluded her presentation with her recommendations for prostate biopsy in 2021: