This website uses cookies to ensure you get the best experience on our website. Privacy Policy
(UroToday.com) The State of the Art lecture at the 2021 virtual annual meeting of the Southeastern Section of the AUA was provided by Dr. Alex Kutikov who discussed the current applications for radical cystectomy and perhaps to spare certain bladders while minimizing risk of disease progression.

Muscle-invasive bladder cancer accounts for 25% of patients presenting with bladder cancer. When the bladder needs to be removed, the bladder is replaced with gastrointestinal segments, which is a >100 year old method, but remains the standard of care. The ileal conduit is our reconstructive workhorse, although neobladders with longer segments of ileum are feasible and often performed. However, bladder substitution is wrought with complications, including altered electrolytes metabolism, altered hepatic metabolism, abnormal drug metabolism, infection, calculous formation, growth retardation, osteomalacia, and subsequent secondary malignancies. Radical cystectomy and urinary diversion is often quoted as having a >60% complication rate.

Alloplastic bladders were first described in 1960 as a box-shaped silicone reservoir attached to the anterior abdominal wall. The silicone tube was brought out onto the skin and served as an outlet. Hydronephrosis was due to ureteral prosthetic anastomoses and was the main reason of ultimate failure. In a study assessing this technique in dogs, there was no dog that survived. The Mayo Clinic alloplastic bladder was described in 1994 and consisted of a vacuum pump, 8 Fr silicone tubes in both ureters, a distensile silicone shell, and a pressure pump. Ultimately, no dog survived with this alloplastic bladder >10 weeks. The Aachen model for an alloplastic bladder took 7 years to develop, and included Dacron-covered silicone tubes through the renal parenchyma, a subcutaneous reservoir, and a Y-shaped Dacron-reinforced silicone reservoir drains into the urethra. The Aachen model alloplastic bladder was implanted into 5 sheep and functioned effectively in 2 sheep for 18 months. There was urinary leakage in 3 animals secondary to anastomosis or material failure, however kidney structure and function was preserved in all cases. Ultimately, reasons for alloplastic bladder failure include: (i) infections with abscess formation, (ii) urinary leaks at the anastomoses site, (iii) mechanical failure of the device, (iv) urinary encrustation, (v) formation of a constructive capsule, and (vi) renal failure secondary to hydronephrosis.

There are several tissue engineering principles and strategies for the treatment of diseased/injured tissue, including (i) implantation of freshly isolated or cultured cells, (ii) in situ tissue regeneration, and (iii) implantation of tissues assembled in vitro from cells and scaffolds. Numerous materials have been tried as matrices, with the most successful including small bowel submucosa (acellular submucosa of porcine small bowel), bladder acellular matrix grafts (acellular collagen) and elastic produce by stripping stromal and epithelial cells from the bladder wall).

Ultimately, the best bladder is one’s own bladder. Since 2003, we have level I evidence for neoadjuvant chemotherapy from the SWOG-8710 trial, comparing M-VAC and cystectomy (90 deaths, median survival of 77 months) versus cystectomy alone (100 deaths, median survival 46 months).1 As such, it is fair to quote patients that there is a 2.6 year overall survival benefit among those receiving neoadjuvant M-VAC and cystectomy. The following dose dense M-VAC approach is what Dr. Kutikov and his colleagues have adopted at the Fox Chase Cancer Center, under the guidance of Dr. Plimack: 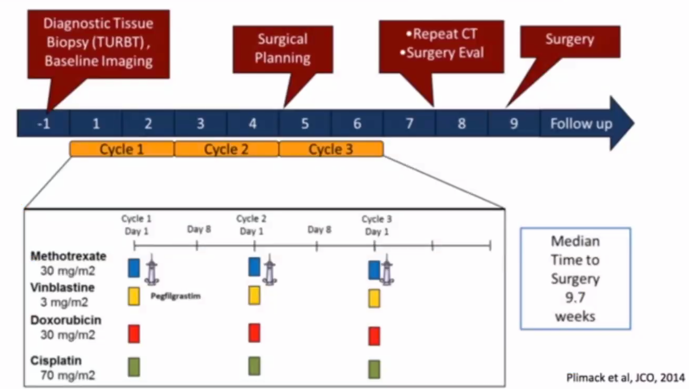 According to Dr. Kutikov the opportunity for leaving bladders behind hinges on achieving and identifying ypT0 urothelial carcinoma after an initial diagnosis of muscle-invasive bladder cancer. Looking at aggregate data, ~30% of patients with neoadjuvant chemotherapy will achieve a ypT0, 12% with TUR alone, and either of these methods were associated with >80% 10 year cancer-specific survival rates. Meyer et al.2 assessed the natural history of clinically complete responders to neoadjuvant chemotherapy for bladder urothelial carcinoma, noting that a small cohort (n=25) of patients who received neoadjuvant chemotherapy did not show evidence of residual tumor at cystoscopy and refused cystectomy. This corresponded to a rate of >70% retaining a functional native bladder. In an assessment of data from two institutions, Mazza and colleagues3 identified 148 patients followed a median of 55 months (range 5 to 145) the 5-year disease specific, overall, cystectomy-free and recurrence-free survival rates were 90%, 86%, 76% and 64%, respectively.

There are varied clinical reports that suggest worrisome cystoscopic miss rate. Data from the SWOG S0219 trial found that among 74 patients receiving neoadjuvant paclitaxel, carboplatin and gemcitabine, the T0 rate was 60%.4 However, looking further into the data, this was based on only 10 patients undergoing cystectomy (6/10 pT0 or greater). The Hopkins group reported that among 62 patients there were 56 patients that proceeded to cystectomy, with 33% of patients being T0, T1 or greater.5 Finally, the MDACC retrospective analysis showed that among 157 cT0 patients undergoing cystectomy, 49.7% (n=78) underwent neoadjuvant chemotherapy, and pT0 was found in 35.7% (n=56).6 Residual tumor was found at radical cystectomy in 63.7% (n=101), of whom 24.8% (n=39) had advanced disease (≥pT3 or node-positive disease). Positive lymph nodes at RC were found in 12.7% (n=20) of the patients. As such, based on this retrospective collective data, complete TURBT does not predict pT0 at radical cystectomy.

Dr. Kutikov notes that accurate preoperative prediction of pT0 could spare cystectomy in ~30% of patients. Second, the accurate negative predictive value of a normal endoscopic examination is yet to be definitively established. Third, there is a requirement for endoscopic evaluation immediately prior to cystectomy, including rigorous documentation of visual findings and pathologic sampling. Finally, there may be the possibility of dovetailing with genomic profile correlates. Based on this data, Dr. Kutikov designed the Cystoscopic Evaluation Predicting pT0 Urothelial Carcinoma of the Bladder trial to be completed at Fox Chase Cancer Center, with a planned accrual of 99 patients. Steps for the trial were as follows: 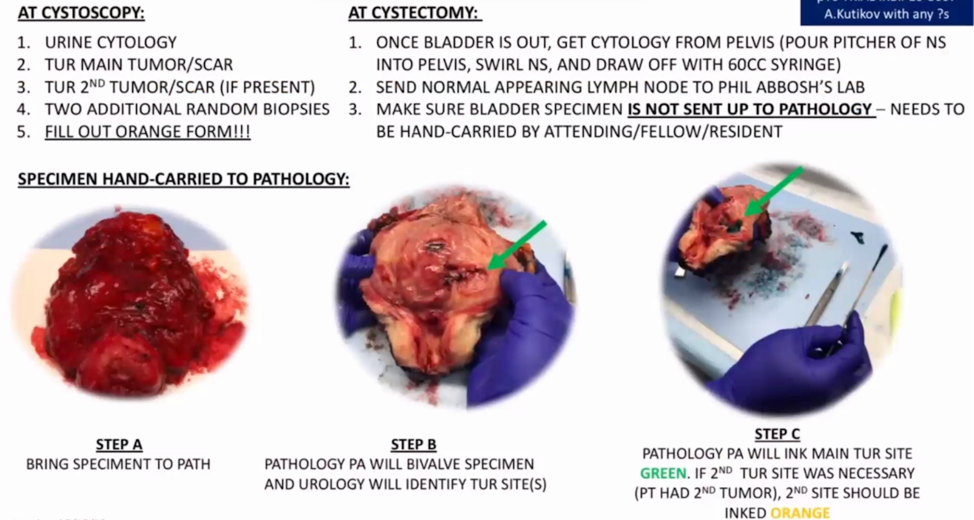 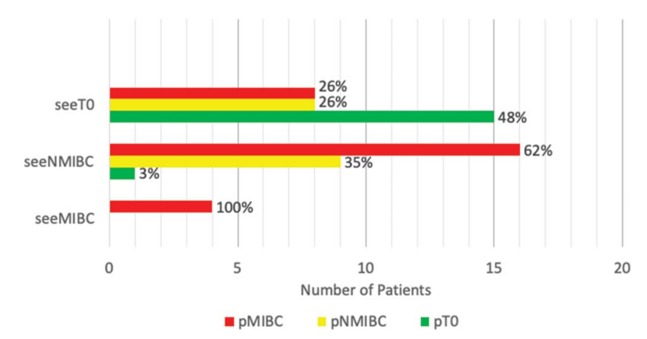 The negative predictive value of systematic endoscopic evaluation predicting a pT0 bladder was 48.4% (CI 30.2-66.9), which was below the prespecified hypothesis, and thus the trial was stopped for futility.

Dr. Kutikov also discussed the RETAIN trial for which patients with cT2-T3N0M0 bladder urothelial carcinoma patients underwent a first TURBT followed by sequencing, followed by AMVAC x3 followed by a second TURBT. Patients were then randomized to the following options: 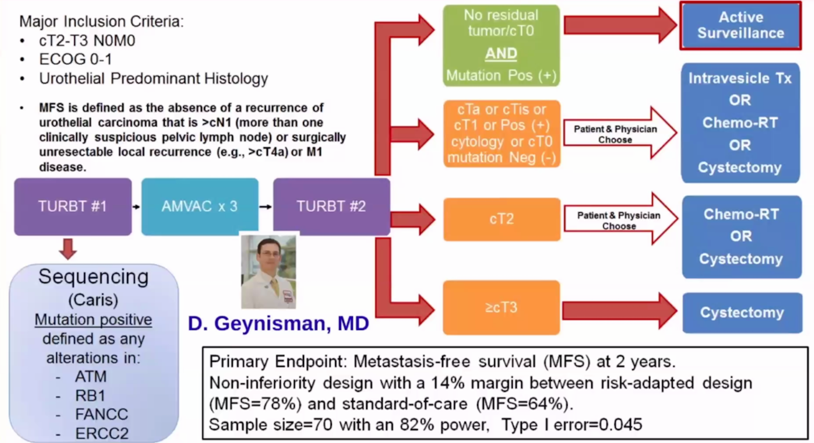 RETAIN-2 assessing the combination of neoadjuvant immune-chemotherapy is a phase II trial that is ongoing: