This website uses cookies to ensure you get the best experience on our website. Privacy Policy
(UroToday.com) Incidental discovery of renal masses has increased with more utilization of cross-sectional imaging, leading to more partial and radical nephrectomies. However, contrast-enhanced imaging is unreliable in differentiating between benign oncocytoma and malignancy kidney masses. The Aorta-Lesion-Attenuation-Difference (ALAD) and Peak Early-phase Enhancement Ratio (PEER) are two imaging-based calculations that may be used to differentiate oncocytoma versus malignancy.1 At the Southeastern Section of the AUA 2021 Virtual Meeting, Dr. Steven Lomax and colleagues presented results of their study evaluating the efficacy of the ALAD and PEER on contrast-enhanced computed tomography (CT) to differentiate between the appearances of chromophobe renal cell carcinoma and oncocytoma.

The cohort was comprised of 119 patients who presented with a renal mass and underwent partial or radical nephrectomy performed by a single surgeon. Patients were only included if a preoperative contrast-enhanced CT scan was available for evaluation and the resected renal mass was pathologically confirmed for chromophobe RCC (n=29), oncocytoma (n=62), or clear cell RCC (n=28). To calculate the ALAD value, Hounsfield units of the aorta and renal mass were measured on the same plane of contrast-enhanced CT. ALAD is expressed by the following equation: ALAD = HUaorta – HUmass. To calculate PEER, Hounsfield units of the lesion and renal cortex adjacent to the lesion were measured on contrast-enhanced CT and non-contrast CT. PEER is expressed as (HUcontrast tumor - HUnon-contrast tumor) : (HUcontrast cortex - HUnon-contrast cortex). 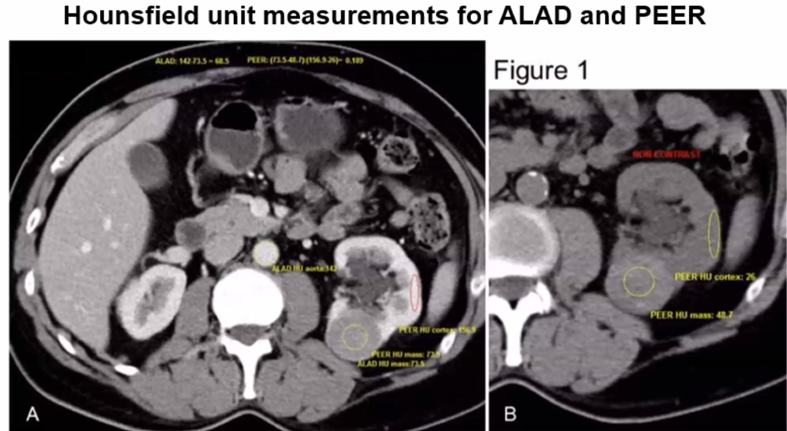 Values were retrospectively measured from contrast-enhanced CT by a single reviewer.

Dr. Lomax concluded his presentation with the following take-home messages: