Dr. Taneja shared his team's experience since 2012 where they performed an MRI before biopsy in almost all men and then targeted MRI fusion biopsy. Cancer detection rates are mostly similar to that of systematic biopsy, but MRI-targeted biopsy detects more high-grade disease and less low-grade disease. Dr. Taneja pointed out that when evaluating the diagnostic accuracy of an MRI, it is critically important to understand that the diagnostic accuracy varies with the prevalence of the disease in the study cohort. In the case of MRI, the diagnostic accuracy will vary between a screening population, men with previous negative biopsy, men who have never been biopsied, or those on active surveillance.

In men with previous negative biopsy, an MRI-targeted approach detects more cancer and more high-grade cancer. He highlighted a study by Mendhiratta et al. which showed a systematic biopsy can miss a large percentage of clinically significant cancer; however, MRI-targeted biopsy does not miss high-grade disease, and among the low-grade disease it missed, 60% are Epstein low risk. If using a cut off of PIRADS4, MRI carries a relatively high negative predictive value of 95% for Gleason 3+4 disease. A consensus statement in collaboration between the America Urological Association (AUA) and the Society of Abdominal Radiology was released, which recommended when high-quality MRI is available, it should be strongly considered, MRI should be interpreted with PIRADS v2 guidelines, and MRI lesion 3-5 warrants a biopsy with image guidance. Most third-party payers have also adopted these recommendations based upon the policy of eviCore.

In men with active surveillance, MRI can help in better baseline risk stratification, fewer biopsies and follow-up, and avoidance of biopsy altogether. Using both targeted biopsy and systematic biopsy significantly increases the rate of reclassification. The likelihood of remaining on surveillance declines with an increasing PIRADS score. Dr. Taneja shared his current surveillance protocol, as shown in the slide below. He also summarized the recent PRECISE guidelines for interpreting change in MRI over time. The use of MRI can augment surveillance strategies and improve clinically significant cancer detection, but there's a general view that current data is insufficient to support its use in replacing biopsy in evaluating disease localization.

In men without previous biopsy, systemic biopsy again misses a large percentage of clinically significant cancers, while MRI-targeted biopsy misses more low-risk cancer. He then highlighted the PROMIS, PRECISION, and the MRI-FIRST trials, which led to the UK and the European Association of Urology (EAU) guidelines adopting MRI in the pre-biopsy space. However, in the United States, the PRECISION trial was heavily criticized as a study that didn't answer all the questions, and pre-biopsy MRI has mainly been rejected as a tool for risk assessment while it's been widely utilized for biopsy guidance. Data from his center is also similar to the data from the UK trials. The MRI-FIRST study conclusion summarizes the current clinical state of MRI- obtaining a multiparametric MRI before biopsy in biopsy-naïve patients can improve the detection of clinically significant prostate cancer but does not seem to avoid the need for systematic biopsy.

Dr. Taneja then summarized his talk with a summary slide, as shown below. 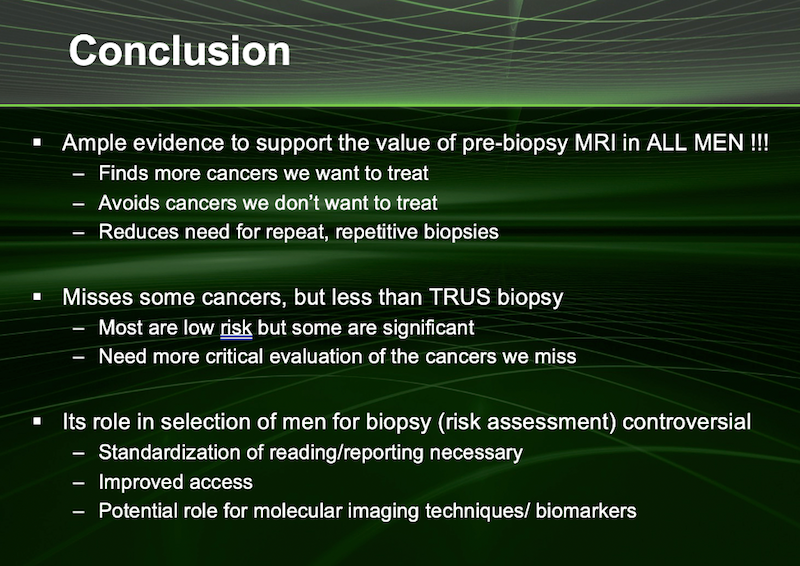