Atlanta, Georgia (UroToday.com) Dr. Evan Yu from Seattle, Washington, gave his second talk of the day on "Optimizing the Use of Chemotherapy and Introducing Radiopharmaceuticals into Treatment Paradigm for Advanced Prostate Cancer" at the 2020 Prostate Cancer Academy.

Dr. Yu started his talk by giving a brief overview of the discussion points and then summarized the CHAARTED trial for patients with metastatic hormone-sensitive prostate cancer, which showed statistically significant overall survival benefit (13 months) with docetaxel and androgen deprivation therapy (ADT) for the overall patient population when compared to ADT alone. The benefit was seen more in the high-volume disease patients with the visceral disease and/or four or more bone lesions with at least one outside of the axial skeleton. No statistically significant overall survival was observed between groups in those deemed to have low volume disease.

Dr. Yu then presented the STAMPEDE trial data, which did not show any significant benefit in the zoledronic acid arm plus ADT, but ADT plus docetaxel arm had a median 10-month overall survival benefit. The STAMPEDE trial had a very heterogeneous patient population, and 39% of the patients did not have metastatic disease but had high-risk features for biochemical recurrence or localized disease. In the metastatic patient population, the overall survival benefit was around 15 months in the docetaxel arm compared to ADT alone (60 months vs. 45 months).

Dr. Yu discussed the optimal treatment choice for metastatic hormone-sensitive prostate cancer patients. For low volume disease, abiraterone, enzalutamide, or apalutamide is recommended, and for high volume disease, docetaxel can be used as well. The treatment should be guided based on patient comorbidities, side effect profiles, duration of therapy, or financial toxicity. He also suggested that it is difficult to improve upon docetaxel chemotherapy, as shown in the subgroup analysis of the ENZAMET trial. The ARASENS trial results will be interesting, which is looking at triple therapy with darolutamide added to ADT and docetaxel.

Dr. Yu then talked about the ALSYMPCA trial in confirmed symptomatic castrate-resistant prostate cancer patients. It compared radium-223 plus standard of care (SOC) to placebo plus SOC and had a statistically significant overall survival benefit of about three months over placebo. A survival benefit was also seen in patients who have received prior docetaxel chemotherapy. The toxicity data was also favorable, but another analysis showed that patients who had predisposing factors for hematologic toxicity were at higher risk of toxicity. He suggested that radium-223 should be used in the initial stages of treatment (pre-chemotherapy) as it has stringent eligibility requirements and requires pre-authorization. Some retrospective studies have also shown that it is more likely to administer all six doses of radium-223 in the pre-chemotherapy setting.

Dr. Yu then summarized recent data from the Phase IV CARD trial, which looked at cabazitaxel earlier in the treatment cycle in patients with metastatic castrate-resistant prostate cancer who progressed within 12 months on prior alternative androgen receptor-targeted agents before or after docetaxel. Patients were randomized to receive cabazitaxel plus prednisone versus abiraterone plus prednisone or enzalutamide. Radiographic progression-free survival and overall survival favored cabazitaxel. Twenty percent of the patients had to drop out due to adverse events in the cabazitaxel arm compared to only 9% in abiraterone or enzalutamide arm but still had better efficacy outcomes. Therefore, if a patient has received a prior novel hormonal agent and docetaxel, then cabazitaxel is a great next option. For patients with a more hormonally resistant and reasonably taxane-sensitive disease, cabazitaxel should be the standard of care. He also highlighted the PROSELICA trial, a non-inferiority trial, and compared cabazitaxel 20mg/m2 vs. 25mg/m2 with overall survival as the primary endpoint. The overall survival endpoint was achieved, and the 20mg/m2 was less toxic.

Dr. Yu also highlighted novel theranostics combination such as lutetium-617 with prostate-specific membrane antigen (PSMA) and may lead to significant efficacy outcomes. The VISION trial has completed accrual, and results are awaited. Many other theranostics are under development.

Dr. Yu briefly discussed neuroendocrine or small cell prostate cancer, which rarely presents as a de novo disease and may arise as a resistance mechanism to ADT. It is treated similarly to small cell lung cancer with platinum-doublet chemotherapy. He also highlighted other situations where platinum chemotherapy can be considered, such as in patients with BRCA2 mutations, and trials such as ABCD, PLATI-PARP, and BRACED are looking at other combinations with platinum chemotherapy.

Dr. Yu concluded his talk with the key take-home points summarized in the slide below. 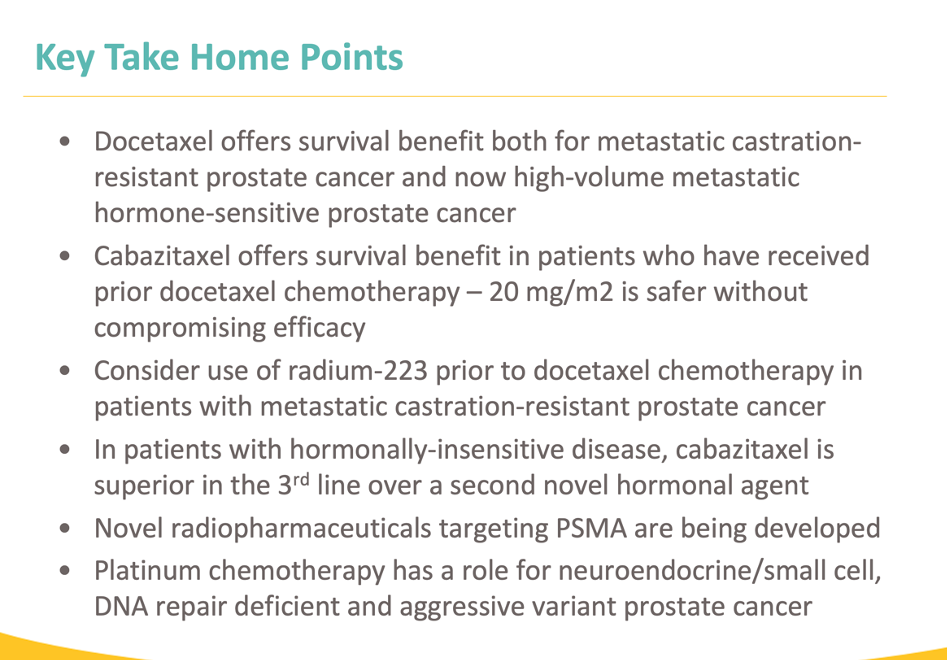