Dr. Yu focused his talk on the role of the novel hormonal agents such as abiraterone and enzalutamide for metastatic castration-resistant prostate cancer patients. He also discussed some of the emerging data on how to sequence these agents and move them in the early disease state, where multiple agents have been FDA approved and show a survival benefit.

Dr. Yu then discussed the LATITUDE trial, a randomized Phase III trial for patients with new metastatic castrate sensitive prostate cancer, who are in the high-risk category with at least two of the three high-risk criteria. Overall survival with abiraterone and androgen deprivation therapy (ADT) was significantly better compared to ADT plus placebo. Similarly, the STAMPEDE trial showed an overall survival benefit with abiraterone and standard of care (SOC) versus SOC alone. He then summarized a post hoc analysis of CHAARTED and LATITUDE study, which was presented at the European Society for Medical Oncology (ESMO) 2018 Congress and showed that abiraterone offers survival benefit for patients with metastatic hormone-sensitive prostate cancer regardless of the volume or risk of the disease.

Dr. Yu then gave a brief overview of the TITAN trial, which compared apalutamide plus ADT to ADT plus placebo. The primary endpoint was dual with radiographic progression-free survival and overall survival and favored the apalutamide arm with 11% of patients receiving prior docetaxel.

Finally, Dr. Yu summarized the ENZAMET trial comparing ADT versus ADT plus enzalutamide. It was run by a cooperative group, and the primary endpoint was overall survival, which was again in favor of the enzalutamide arm. Docetaxel was allowed in this study, and approximately 40% of patients received ADT plus docetaxel plus-minus enzalutamide. No benefit in overall survival was seen by adding enzalutamide to ADT and deocetaxel, but progression-free survival was better. Triple therapy with ADT, docetaxel, and enzalutamide had more adverse events such as sensory neuropathy, nail discoloration, watery eyes, and fatigue.

To summarize the landscape of metastatic hormone-sensitive prostate cancer, Dr. Yu recommended treating low volume metastatic disease with abiraterone, enzalutamide, or apalutamide as they all offer significant survival benefit. For high volume metastatic disease, he recommended again using any of the three drugs for low volume disease or docetaxel. He delineates these options based on the patient’s comorbidities, side effect profiles, duration of therapy, and financial toxicity. Many patients tend to go with oral therapy because of the side effects of chemotherapy with docetaxel. He also stressed that it is not easy to improve upon docetaxel for patients with high volume disease, and the results from the ARASENS trial will be impressive.

Dr. Yu then moved on to studies related to M0 castrate-resistant prostate cancer and started with Phase III SPARTAN trial comparing apalutamide 240mg plus ADT to placebo plus ADT daily. The patients were at high risk of progression with PSA doubling time (PSADT) of less than ten months. The primary endpoint was metastasis-free survival, which was in favor of apalutamide. However, 23% of patients developed a rash, and 8% developed hypothyroidism, which is unique to apalutamide.

Dr. Yu briefly described the PROSPER trial, which had a very similar trial design to the SPARTAN trial, and compared enzalutamide plus ADT to placebo plus ADT. Metastasis-free survival was in favor of enzalutamide.

He also summarized the Phase III ARAMIS trial, which compared darolutamide plus ADT to placebo plus ADT. The primary endpoint was metastasis-free survival and again favored darolutamide, with a 59% reduction in risk of distant metastases or death, and the side effect profile was better compared to placebo.

The secondary endpoint data for overall survival in SPARTAN, PROSPER, and ARAMIS trials have recently been confirmed and statistically significant in favor of apalutamide, enzalutamide, and darolutamide, respectively.

Dr. Yu finished his talk with key take-home points, which are summarized in the slide below. 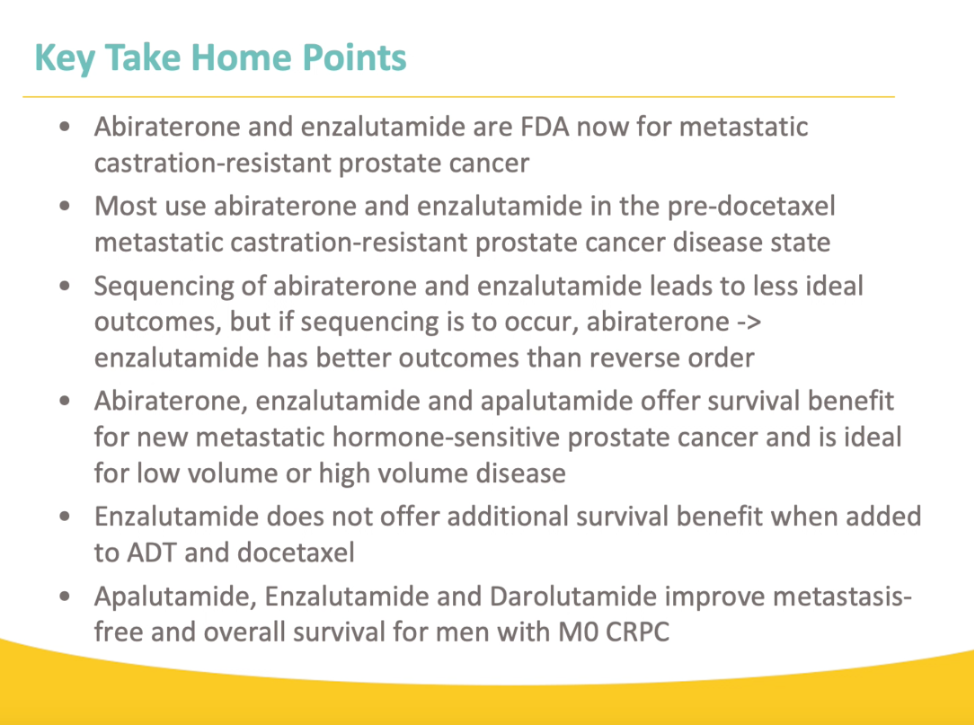